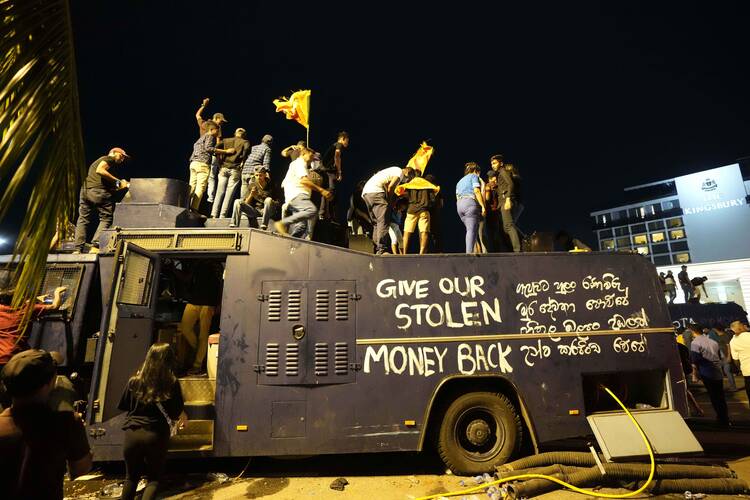 Pope Francis expressed his closeness to “the suffering of the people of Sri Lanka” on July 10, as this country of 22 million people continues to endure political instability and the worst economic crisis in its history.

The pope, who had visited the island in January 2015, joined the Sri Lanakan Catholic bishops in an “appeal for peace” and to the country’s political leaders “not to ignore the cry of the poor and the needs of the people.”

The BBC reports that the island nation off southern India is suffering “rampant inflation” and “is struggling to import food, fuel, and medicine amid the country’s worst crisis in 70 years. It has run out of foreign currency to pay for petrol and diesel and has had to impose a ban on sales of petrol and diesel for private vehicles, leading to days-long queues for fuel.” Schools have closed and people have been asked to work from home.

The pope joined the Sri Lanakan Catholic bishops in an “appeal for peace” and to the country’s political leaders “not to ignore the cry of the poor and the needs of the people.”

The BBC reports: “The government blames the Covid pandemic, which affected Sri Lanka’s tourist trade—one of its biggest foreign currency earners.” Tourists also “have been frightened off by a series of deadly bomb attacks on churches in 2019.” The BBC also said that the government has “racked up huge debts with countries including China, to fund what critics have called unnecessary infrastructure projects.”

Pope Francis expressed his concern to pilgrims in St. Peter’s Square after hundreds of thousands of protesters, following months of peaceful protests in the capital Colombo and across the country, invaded the residence of President Gotabaya Rajapaksa. The president’s family has ruled the country for the past 20 years and did not want to give up power. Protesters also burned the residence of the country’s six-time prime minister, Ranil Wickremesinghe. Neither of the political leaders were in the buildings at the time.

The strongman president, who as Defense Secretary when his brother Mahinda was prime minister had brutally crushed the Tamil Tigers separatist movement in 2009, decided to abandon the residence the evening before the protesters arrived and let it be known that he would resign on July 13. The prime minister has also agreed to resign. News of their resignation led to widespread celebrations.

Their resignations follow insistent demands from protestors but also from the religious leaders of this majority Buddhist country—65 percent of the 22 million population are Buddhists, 18 percent are Hindus, 11 are Muslims, and 8 percent Christians, among them 1.5 million Catholics.

Cardinal Ranjith: “This family considers their political power more important than the wellbeing of the people.”

On July 6, Cardinal Malcolm Ranjith, archbishop of Colombo, held a press conference at which he said the credibility of the Rajapaksa family has fallen so low that all of their attempts to achieve financial, political or constitutional changes have been rejected by public opinion, Asianews reported.

“This family considers their political power more important than the wellbeing of the people,” Cardinal Ranjith said. He called on Mr. Rajapaksa and the members of the Rajapaksa family that occupy positions of power to quit to enable the country to deal with the grave crisis.

He said, “On behalf of the suffering people, what I am earnestly requesting from the president and the government of Sri Lanka is to accept their responsibility for the sad situation and step down from their positions since they have no moral right to continue in office anymore under these circumstances.”

The cardinal called for the formation of a caretaker government that would address the most immediate problems with the assistance of competent technicians so that the country could hold an election as soon as possible. He appealed to the opposition leaders “to work in unity and with transparency renouncing their petty political and ideological limitations.”

According to Asianews, Bishop Asiri Perera, a former president of the Methodist Church of Sri Lanka, made a similar request for the resignations. He said, “People are not asking for a new government or a new ruler; they are asking for gas to cook, fuel for vehicles, uninterrupted power supply, a lower cost of living.”

He appealed to the politicians, “Don't get into a power struggle.”

On the same day, Asianews reports, the Bhikkhu Maha Sangha Sabha, an association of Buddhist monks, sent a letter to the president inviting him to work immediately for the creation of an all-party government.

The BBC reports that “political leaders” are expected to hold meetings “to discuss a smooth transition of power” and Sri Lanka’s military “has appealed to people to cooperate with security forces to maintain calm” in the country.