Pope Francis Sets Out for Sri Lanka and the Philippines 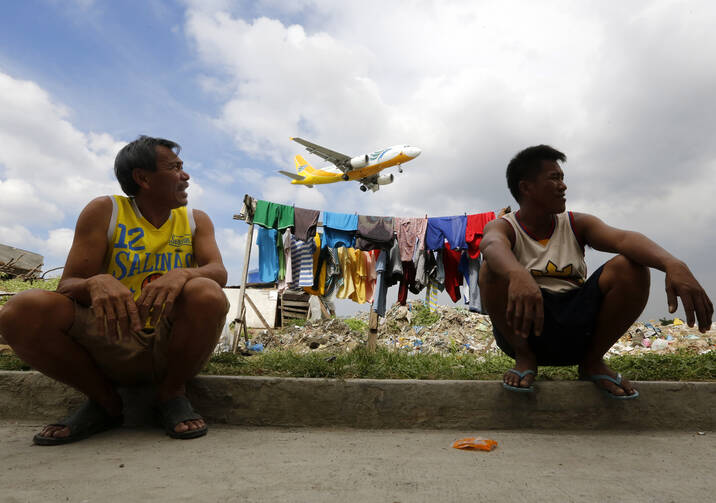 Pope Francis is returning to Asia for the second time, stopping first in Sri Lanka, a predominantly Buddhist country, from January 13-15, and then taking a flight to the Philippines, the most populous Catholic country in Asia, where he will stay from January 15-19.

This is his seventh foreign trip since becoming pope in March 2013, and it is the longest one he has made. The flight from Rome to Colombo, the capital of Sri Lanka, takes 9 hours and 40 minutes. The journey from Colombo to Manila is another six hours flight. He is being accompanied by his Secretary of State, Cardinal Parolin, other Vatican officials, personal body guards, and 72 journalists, including America’s correspondent.

He arrives in Sri Lanka in a climate of maximum security and tension following an election upheaval on January 8, rumors of an attempted coup, and 45 incidents of post-election violence according to local media that, at the time of writing, has left one person dead.

The fearless Pope, however, has insisted on travelling in two open pope-mobiles in this island, known as “the pearl of the Indian Ocean,” where Buddhists count for 65 percent of the 21 million population, Hindus 18, Muslims 11, and Christians around 7-8 percent, among them 1.5 million Catholics. Here relations between the followers of the different religions are reported to be generally good, and the Buddhist too (with the exception of a small fundamentalist group) have welcomed his visit.

According to tradition, St Thomas the apostle visited this island which has a 3,000 year history, but Christianity first took root in the 1500s when the Franciscans arrived with the Portuguese, who were the colonial rulers from 1505-1658. The Dutch took over from the Portuguese as rulers of this island from 1658 to 1796, and this marked a time of persecution for the Church. The British followed the Dutch as the colonial power and ruled the country for the next 150 years (it was known as Ceylon), but they left in 1948 when the country gained independence.

The Jesuits first arrived here in 1602, and were followed by the Dominican and Augustinian missionaries. St Francis Xavier is said to have visited this beautiful island three times. All this will no doubt be in the mind of the first Jesuit pope when he steps off the Alitalia Airbus 330 at nine o’clock on Tuesday morning, January 13. Like the first Jesuit missionaries he too is looking to Asia, where he hopes a new springtime can flourish for the Church in this continent where Christians count for a mere 3 percent of the two-thirds of humanity that live here.

He is the third pope to visit Sri Lanka. Paul VI, the first pope to travel abroad in the modern era, came here in 1970 and John Paul II visited in 1995. Like his predecessors, Francis will also visit the Philippines, which is home to more than half of the Catholics in Asia.

Francis is coming to Sri Lanka to canonize the country’s first saint, Blessed Joseph Vaz, and to comfort the many victims of the 30 year (ethnic) war between the Government forces and the Tamil Tigers which ended in the most brutal way in May 2009, after causing the deaths of some 100,000 people (in the whole war), making hundreds of thousands homeless, and sowing the seeds of hatred and animosity.

During his visit, Francis will comfort the victims, advocate for justice, pray for and encourage reconciliation between the majority Singhalese (75%) of the population and the minority Tamils who feel they are second class citizens in this land which is also known as ‘the tear drop of India’. As he has done on other occasions, Francis may well invite the people “to weep” for all that has happened, and encourage them to open their arms to each other because, as he insists, “we are all children of the one God, brothers and sisters that share the same humanity.”

There is great excitement and joy among the Catholic community in Sri Lanka, and also—reports say—among the population in general, because he comes as somebody Asians respect for his simplicity and concern for the poor. Moreover, he arrives at a new political moment in this island—with a new President—that could open a new future for the people, and he is sure to give them encouragement to walk down this road.

On Thursday, the Pope will take the plane from Colombo to Manila, a six hour flight, and in this country of 7,000 islands and 100 million people, he is expected to be given an oceanic welcome. Millions of Filipinos intend to turn out to greet him in the two islands he will visit. There will be extraordinary security in Manila, according to the local media some 40,000 police and military will be on duty, and security will be similarly tight when he visits Tacloban, an hour’s flight from Manila, to comfort the 4 million who have been made homeless in the Visayas by the typhoon Haiyan (Yolanda) in November 2013. He will also meet and take a meal with some of the survivors of that terrible disaster.

Just as in Sri Lanka, so too in the Philippines, Pope Francis wants to touch and embrace the people wherever he goes, and—dismissing security concerns—he has opted to travel in two open pope-mobiles and a jeepney during his stay here from Jan. 15 to 19. “When I visit people, I do not want to go in a glass cage,” he has said on many occasions. He is firmly convinced that God, who has chosen him to be pope, will also protect and keep him safe for as long as he wishes.