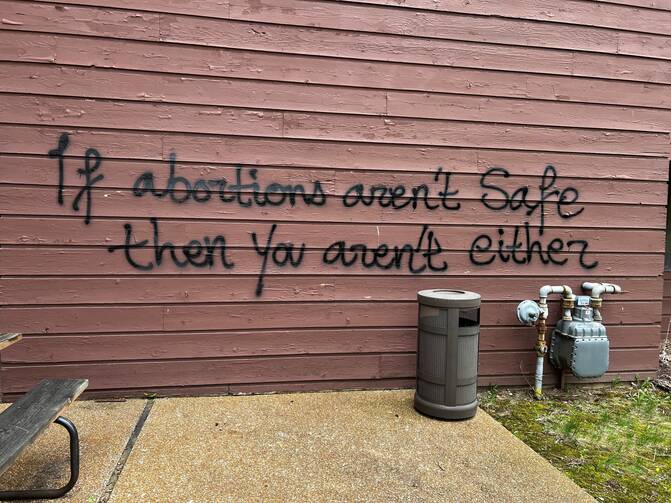 The offices of Wisconsin Family Action in Madison, Wis., were vandalized on May 8, 2022. (CNS Photo /Molly Beck, USA TODAY NETWORK via Reuters)

Employees at the Church of the Ascension in New York City’s Upper West Side neighborhood discovered spray-painted graffiti on the front doors of the church early Monday morning. “If abortion isn’t safe, neither are you” was scrawled in black paint, along with “Jane’s Revenge,” an apparent reference to what the Department of Homeland Security describes as a “network of loosely affiliated suspected violent extremists,” who are reacting to the U.S. Supreme Court’s ruling that abortion is not a constitutional right.

The Rev. Daniel Kearney, the church’s pastor, told America that the graffiti was removed hours after it was discovered. He said that security cameras spotted someone vandalizing the doors around 3:30 in the morning on Monday, just a few minutes after a police presence on the block had departed. Father Kearney said he was “saddened” by the vandalism, but he also said he wants to ensure parishioners that they will be safe attending Masses and that the parish is working with police as they increase patrols around the church ahead of weekend services. “Clearly this is going to be an ongoing debate and discussion, and it just can’t be reduced to vandalism and violence,” he said.

Another Catholic church, in Fairfax County, Va., was spray-painted with several messages related to the court’s ruling, police said. Police and firefighters arrived at St. John Neumann Catholic Church early Saturday morning, where they encountered a fire and at least four instances of graffiti, according to The Washington Post. One of the messages, painted in white on the base of the church’s sign, read, “This Wont Stop.”

Graffiti, stating “If abortions aren’t safe neither are you,” was found on a sign for All Saints Parish in Portland, Ore., over the weekend. Several businesses in Portland were also vandalized during an abortion-rights march, actions that a city official called “despicable,” The Oregonian reported.

And in Louisiana, parishioners at a Catholic church in New Orleans cleaned up vandalism over the weekend that targeted a memorial to unborn children. At Holy Name of Mary Catholic Church, a statue of Mary and Jesus, located near unmarked tombstones, was covered in red paint sometime following the court’s decision. A sign planted in the ground nearby read, “In Memory of Women Who Die From Lack of Legal Abortion,” according to nola.com.

Graffiti, stating “If abortions aren’t safe neither are you,” was found on a sign for All Saints Parish in Portland, Ore., over the weekend.

Catholic bishops celebrated last week following the court’s decision, with two top leaders of the U.S. Conference of Catholic Bishops saying that they “thank God” for the reversal of the 1973 case that protected access to abortion. But demonstrations and rallies supporting abortion rights were held in many cities over the weekend, and for weeks prior to the decision, federal law enforcement had warned Catholic churches, pro-life pregnancy centers and organizations that fight against abortion that they may be targeted by extremists.

Speaking on Friday following the decision, President Joe Biden said his administration would do what it can to ensure wide access to abortion, but he urged protesters to remain peaceful.

“I call on everyone, no matter how deeply they care about this decision, to keep all protests peaceful,” he said. “No intimidation. Violence is never acceptable. Threats and intimidation are not speech. We must stand against violence in any form regardless of your rationale.”

“I call on everyone, no matter how deeply they care about this decision, to keep all protests peaceful,” President Biden said. “No intimidation. Violence is never acceptable.”

On Sunday morning, a New York City police officer, wearing a “Counterterrorism” vest, stood across from Brooklyn’s Co-Cathedral of St. Joseph during morning Mass. A spokesman for the New York Police Department said in a statement to America that the department plans to have “additional resources dedicated to facilitate expected demonstrations or marches.”

“The NYPD is here to support all expressions of free speech or protest as long as it is peaceful, lawful and non-violent,” the statement read. “We will also provide additional resources and special attention to sensitive locations to guard against property damage or vandalism.”

The Diocese of Fresno, Calif., added extra security around its cathedral, a spokesman told local news station KMPH, in response to what he said was a warning from the Department of Homeland Security to California bishops about possible threats to Catholic churches.

And in Chicago, the archdiocese circulated a memo to priests last week urging them to review safety plans, to ensure facilities are secure and to work with local police if they felt the need for additional security.

Earlier this month, a group of pro-life organizations, including some that are Catholic, sent a letter to federal law enforcement officials urging them to investigate vandalism targeting pro-life groups.

Earlier this month, Cardinal Timothy Dolan, the New York archbishop and head of the U.S.C.C.B.’s committee for religious freedom, released a statement along with Archbishop William Lori, who heads the pro-life committee, urging elected officials to take vandalism targeting Catholic spaces more seriously. The archbishops said that incidents of vandalism targeting churches and pro-life pregnancy centers had increased over the past two years, particularly following the leak of the Dobbs decision in May.

“In light of this, we urge our elected officials to take a strong stand against this violence, and our law enforcement authorities to increase their vigilance in protecting those who are in increased danger,” the statement read.

The Federal Bureau of Investigation said it was “investigating a series of attacks and threats targeting pregnancy resource centers and faith-based organizations across the country,” in a June 17 statement to the New York Post.