‘We thank God today’: Catholics react to the end of Roe v. Wade 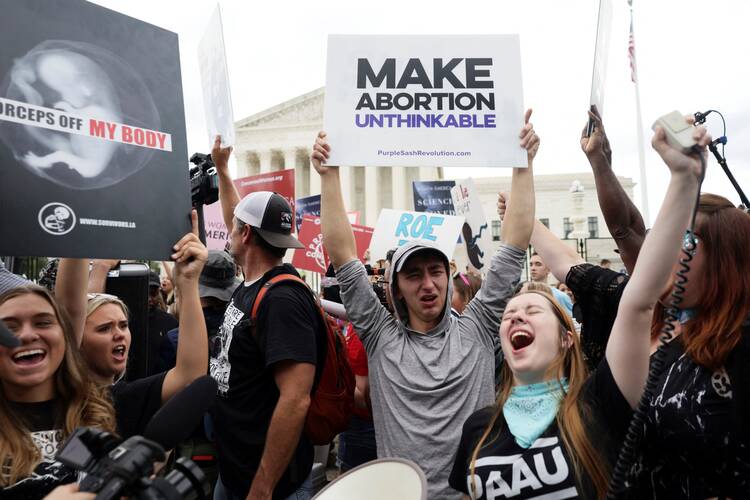 Following the announcement of the Supreme Court’s decision to overturn Roe vs. Wade, which is expected to lead to abortion bans or restrictions in about half of U.S. states, many Catholic leaders welcomed the news as a culmination of decades of pro-life activism while also calling for the creation of a stronger social safety net to assist women facing crisis pregnancies.

“For nearly fifty years, America has enforced an unjust law that has permitted some to decide whether others can live or die,” said Archbishop José Gómez, president of the U.S. Conference of Catholic Bishops, and Archbishop William Lori, the head of the bishops’ pro-life committee, in a joint statement. “We thank God today that the Court has now overturned this decision. We pray that our elected officials will now enact laws and policies that promote and protect the most vulnerable among us.”

Catholic leaders welcomed the news as a culmination of decades of pro-life activism while also calling for the creation of a stronger social safety net.

The archbishops praised “the prayers, sacrifices, and advocacy of countless ordinary Americans from every walk of life” who have protested against abortion rights and said “the pro-life movement deserves to be numbered among the great movements for social change and civil rights in our nation’s history.”

With many states expected to enact strict prohibitions against abortion in the wake of the court’s ruling, Archbishop Gómez and Archbishop Lori said, “Now is the time to begin the work of building a post-Roe America.”

They called for “civil dialogue” and “for coming together to build a society and economy that supports marriages and families, and where every woman has the support and resources she needs to bring her child into this world in love.”

A statement from the Society of Jesus in the United States called abortion “a massive injustice in our society” and praised the decision as “a critical step toward the legal protection of all unborn children.”

The U.S. Jesuits also called for building a “stronger social safety net than our country has today.”

A statement from the Society of Jesus in the United States called abortion “a massive injustice in our society” and praised the decision as “a critical step.”

“To be truly pro-life, we must support all women, expectant parents and their children by advocating for policies like universal health care, paid parental leave and a more equitable distribution of our country’s abundant resources,” the statement said.

A group of Catholic scholars were less enthusiastic about the ruling, warning that it would put the health and safety of women at risk.

“A majority of Catholics recognize that criminalizing abortion does not help the poor and vulnerable in our society,” Natalia Imperatori-Lee, a professor of religious studies at Manhattan College, said in a press release circulated by the progressive activist organization Faith in Public Life. “This ruling will endanger lives, especially those of poor women of color. We can trust women to make moral decisions about their lives.”

M. Therese Lysaught, a professor at the Neiswanger Institute for Bioethics and Health Care Leadership at Loyola University Chicago and a member of the Pontifical Academy for Life, said in the same release that the pro-life movement’s focus on Roe came at the expense of addressing the underlying reasons that compel people to turn to abortion.

“It has never truly been about life: it has simply sought to overturn Roe with little attempt to practically address the root causes of abortion,” Dr. Lysaught said. “It has never been about creating a context where children are cared for and nurtured as part of the common good.”

She called the Dobbs decision a “tactic in a broader strategy of hijacking established constitutional, judicial processes that are necessary for sustaining a robust, democratic polity and the common good.”

A group of Catholic scholars were less enthusiastic about the ruling, warning that it would put the health and safety of women at risk.

Gloria Purvis, the host of The Gloria Purvis Podcast at America Media, offered a different view:

When have Black women ever not struggled with pregnancy and parenting in the history of this country? Never! And yet we still gave birth and reared children in the most dire circumstances.

Maybe now with #Roe gone we can actually focus on supporting Black women. 1/

Many Catholic leaders expressed support for the court’s decision but said society must do a better job in providing support to women in need.

Cardinal Joseph Tobin, the archbishop of Newark, said in a statement: “Abortion represents a failure to recognize the sanctity of human life and promotes a culture in which human life in its most vulnerable moment is perceived as disposable.” While welcoming the court’s decision, he said society “must ensure that life-giving options are available and our support does not end simply with the birth of a child.”

Archbishop Vincenzo Paglia, who heads the Pontifical Academy for Life, called the decision “a powerful invitation to reflect together on the serious and urgent issue of human generativity and the conditions that make it possible.”

He added, “by choosing life, our responsibility for the future of humanity is at stake.”

Cardinal Blase Cupich, the archbishop of Chicago, also saw in the court’s decision an opportunity for dialogue.

“This moment should serve as a turning point in our dialogue about the place an unborn child holds in our nation, about our responsibility to listen to women and support them through pregnancies and after the birth of their children, and about the need to refocus our national priorities to support families, particularly those in need,” he said in a statement.

Cardinal Blase Cupich, the archbishop of Chicago, saw in the court’s decision an opportunity for dialogue.

Serrin Foster of Feminists for Life released a statement saying: “At this time, we pause to remember, and gather our strength, rededicated to our mission of resources and support for women and their children — born and unborn. We refuse to choose.”

A statement from the eight bishops of New York State expressed gratitude to pro-life activists, “who have worked tirelessly toward this outcome for nearly a half-century.

“As Catholics, we have prayed and fasted, held vigils, offered Masses, and peacefully witnessed in these last five decades,” the bishops said. “Today, our voice has been heard”

Abortion is expected to be banned or to face tight restrictions in about half of all U.S. states in the coming weeks. The Catholic lobbying organization Network released a statement asking if religious leaders and lawmakers are willing to help provide safety net resources in light of anticipated changes.

"Will state and federal legislatures now introduce and pass a groundswell of policies to offer a robust social safety net of resources for all women and families that allow everyone to thrive?" asked Joan F. Neal, the deputy executive director and chief equity officer, Mary J. Novak, executive director, and Erin Zubal, OSU, chief of staff of the organization. "Are religious leaders prepared to allocate resources through the largesse of their institutions and donors to ensure that any gaps in the social safety net are filled?"

The head of the abortion rights group Catholics for Choice, Jamie Manson, called the court’s decision “unconscionable” and said that it strips away “a woman’s most fundamental freedoms, namely her ability to control her own fertility and determine her own destiny.”

The bishops in Texas said in a statement they looked forward to the implementation of a so-called trigger law, designed to go immediately into effect upon today’s Supreme Court decision, that will ban most abortions.

“This decision begins a new chapter of light in American history with the end of legal elective abortion in Texas,” they said. “It requires that we become intentionally more aware of the needs of pregnant mothers and fathers of the unborn in our own parishes and communities by listening to them, seeking understanding, and helping them obtain the necessities of life for themselves and their children.”

An editorial published in America said that thorny questions about the legal and moral dimensions of abortion deserve to be debated in political spaces other than the courts.

“As we long have, the editors of America continue to argue that as a constitutional matter, the regulation of abortion is primarily a question for state legislatures; as a moral matter, unborn human life has sacred dignity and is deserving of legal protection; and finally, as a political matter, that the complicated and divisive questions surrounding abortion cannot be effectively addressed when the only real political venue for the issue is in the Supreme Court,” the editorial reads.