What the Jan. 6 hearings could mean for the 2024 election—and the future of democracy 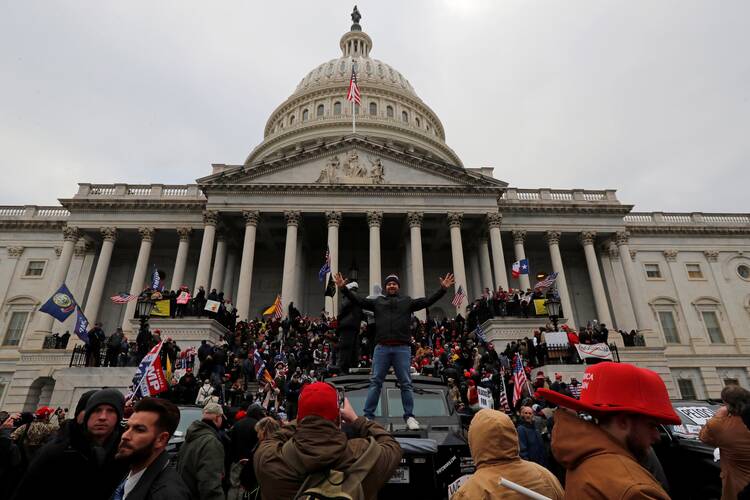 Supporters of U.S. President Donald Trump climb on walls at the U.S. Capitol during a protest against the certification of the 2020 U.S. presidential election results by the U.S. Congress, in Washington in this Jan. 6, 2021, file photo. (CNS photo/Jim Bourg, Reuters)

The congressional hearings on the Jan. 6, 2021, attack on the U.S. Capitol have reconfirmed that the events of that day constituted a real threat to democracy. Most people who choose to watch the hearings may already be convinced of this, but the reminders may come into play in elections for governor, secretary of state and other local officials in numerous locales this fall, which will determine who oversees the voting process in 2024.

Still, we can’t expect a sudden “fever break” in the United States or in the Republican Party. The Jan. 6 hearings are more likely to work as part of a long, gradual effort to restore confidence in our political institutions—an effort to convince Americans, almost one by one, that Mr. Trump’s “I alone can fix this” brand of authoritarianism can only further divide the country into hostile halves.

The defenders of democracy need a vision beyond opposition to Mr. Trump.

The defenders of democracy need a vision beyond opposition to Mr. Trump. One question for Democrats is whether Trumpism is primarily an attack on the political norms that allow our pluralist country to function, or whether it is primarily an attack on specific vulnerable populations such as racial and religious minorities. One can say that Trumpism is both of these things, but they each call for different responses. The first calls for a gradual restoration of confidence in the political process before any attempt at major public policy changes. The latter demands that the Democrats win power and wield that power even at the risk of further deepening political division and polarization.

This more impatient approach mirrors the simplicity and urgency of Mr. Trump himself. It is a “fight fire with fire” approach, an unrelenting assault on not only the supporters of Mr. Trump or the Republican Party, but also on anyone who does not fully commit, for as long as it takes, to extinguishing the American right. This is an approach that equates contemporary American politics to World War II and the “good fight” against Nazi Germany. And it is an approach that mirrors the right, that adopts the Manichean vision of the conservative political strategist Steve Bannon and others that we are in a clear-cut battle between good and evil, or that we are in a never-ending “Flight 93” election which is always our last chance to avert catastrophe for the United States.

The language of urgency, and of moral clarity, is part of the democratic process, indispensable to legislative debate and election rallies. But it has a corrosive effect if deployed in every political discussion with one’s relatives, co-workers, neighbors and fellow social media users. There is an argument for prohibiting Jan. 6 insurrectionists from running for office (even if this treating a symptom rather than the disease), but constantly widening the circle of opprobrium to declare more and more (and even most?) citizens as fascist sympathizers can discredit the very reasons for giving all citizens a voice in government. How can democracy work if the 47 percent of the electorate who voted for Mr. Trump in 2020 are all racist, misogynistic gun nuts?

The bad behavior can include shouting down speakers at public venues and an escalation of “cancel culture.” It can mean erasing what should be a large zone in political discourse between “My thoughts exactly!” and “This is unacceptable speech.” It can include a refusal to recognize any differences among individuals on the other side, as if Mitt Romney and Ted Cruz were twins, or to signal that lifelong Republicans like Liz Cheney who defy Trumpism will be given the kind of cold shoulder that Christine Baranski’s character offers to those with “new money” in “The Gilded Age.”

Anti-democratic, “Flight 93” behavior can also include a deep suspicion of independent journalists alongside the paternalistic view that the press could simply push voters onto the right path if it really wanted to (shades of Green Lanternism again), and that it should not report on things like crime statistics if voters cannot be trusted to interpret them “correctly.”

In short, the “fight fire with fire” approach means an abandonment of the norms that will not be easy to restore even if the Democrats manage to hang on to power in Washington for another two years. So what is the alternative? If the Democrats support majority rule and the will of the people, they must work to win more votes. Whether you think it is fair or not, it means the Democrats must convince voters that they will treat their political opponents better than the Republicans would.