On abortion and LGBT rights, states are getting more powerful. Will there be a backlash? 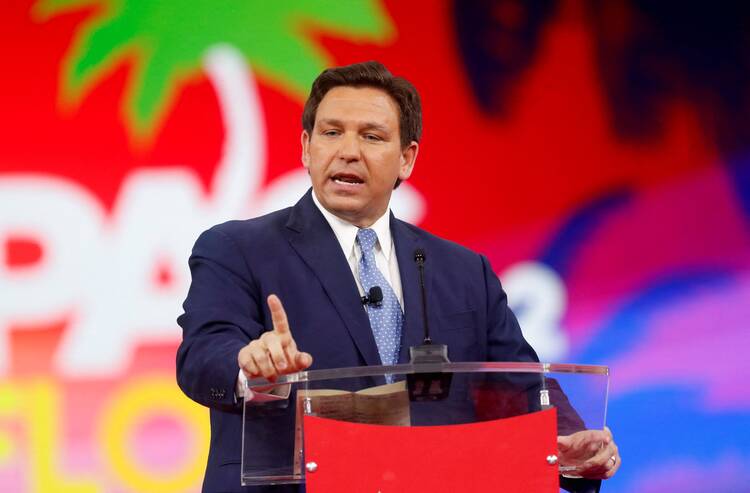 What level of government do you trust the most? According to a Pew Research Center poll conducted this spring, 66 percent of U.S. adults have a “favorable” view of their local (county, city or town) government, compared with 54 percent who say the same about their state government and only 32 percent who have positive feelings about the federal government. Does this mean that the reversal of Roe v. Wade, which will return the power to regulate abortion to the states, will be popular with American voters and Catholic voters in particular? Not necessarily.

Pew polled the same question in 2019, and the biggest change over the past three years was a softening of support for state government; favorable views still outweigh unfavorable views, but the ratio has dropped from 59-40 to 54-45. It may not be a coincidence that state governments have been getting more powerful during this period, and the Roe reversal is only one example of this trend. After nearly a century of warnings about the “imperial presidency” and its growing power, we may be reading more about imperial governors such as Florida’s Ron DeSantis, now making headlines by punishing the Disney company over L.G.B.T. issues and preventing the Special Olympics from instituting a Covid vaccine requirement.

The end of Roe may not settle the question of which level of government is best situated to decide public policy.

In some ways, stronger state governments is a return to the norm. Compared with other major democracies, the United States has always given more policy-making power to the level of government one step down from the national capital. The states largely make their own policies on education, health care and housing development, and suggestions that the national government should run national elections have never gone very far (even if the decentralized approach could lead to huge problems in 2024).

But the Roe ruling in 1973 was part of a long-term movement to shift power to the national government. From 1932 through 1994, the Democratic Party usually controlled both houses of Congress even when it didn’t hold the presidency, and the Supreme Court was a frequent ally in a movement to enforce constitutional rights (or create rights out of thin air, critics of Roe say) and to create national standards for things like criminal trials, election procedures and the accommodation of religious beliefs.

The Roe ruling in 1973 was part of a long-term movement to shift power to the national government.

That political arrangement has vanished: Republican presidents have named most of the justices on the current Supreme Court, and the Democratic Party’s recent plunge in popularity in rural areas puts it at a disadvantage in the Electoral College and in the U.S. Senate, greatly diminishing its ability to set national policy. Meanwhile, the Republicans have a power base in state legislatures, regularly winning control even when they get fewer votes statewide. (Gerrymandering is one factor, but the concentration of Democratic voters in heavily urban, geographically small areas is another. For every Democrat who wins an urban seat by 50 points, there may be two Republicans who win suburban or rural seats by 10 points each.) And Republicans want state governments to assert themselves.

The preference for policy-making at a lower level of government may have a familiar ring for Catholics. The Catholic principle of subsidiarity means that, as America contributor Nathan Schneider once explained, “decisions should be made at the level of those who are affected by them, as locally as possible.” This makes sense in many areas of public policy: Mayors should be able to fight crime in the way that makes the most sense for their communities (perhaps by funding youth sports leagues instead of buying more military hardware for the police), and school districts should have some latitude in creating sex education curricula (responding to the concerns of local parents rather than simply following a template from Washington).

Abortion is not the only issue on which giving political power back to the states may not be as easy as it seems.

Subsidiarity and local policymaking also makes sense if your goal is to reduce the number of abortions in the United States, with the pro-life movement pursuing different strategies in different states to support women facing unexpected pregnancies and to provide alternatives to abortion. But what if your goal is to end abortion almost entirely? What if another Catholic principle, solidarity with the unborn, is more important than giving state governments the ability to set their own courses on such an important issue? Wouldn’t you still fight to end abortion in every state and not just your own—just as the pro-choice movement will still fight for legal abortion in every state?

Abortion is not the only issue on which giving political power back to the states may not be as easy as it seems. Republican-led legislatures in particular have already been enacting laws that expand state powers in a variety of areas, putting restrictions on L.G.B.T.Q. content in public schools and libraries, transgender participation in sports, the mention of critical race theory in classrooms, voting by mail and protest marches. At the same time that these states have been asserting their power against the federal government, many have also been limiting the powers of local government (the level most trusted in the Pew survey) by enacting “pre-emption laws” to stop cities and towns from regulating guns, setting minimum wages or passing their own L.G.B.T.Q. nondiscrimination laws.

Even before the Roe reversal, there may have been the beginning of a backlash against increasingly powerful state governments. And that backlash may unite activists on both sides of the political spectrum. Both L.G.B.T.Q. activists and those who claim opposition to “gender ideology” may find it unacceptable for nondiscrimination laws to vary from state to state. Both pro-choice activists who champion the rights of pregnant women and pro-life activists who defend the rights of the unborn may find it intolerable to subject those rights to the whims of state legislators.

In other words, the end of Roe may not settle the question of which level of government is best situated to decide public policy. It may instead leave the country more divided than ever.

Editor’s note: This story was updated on June 24, 2022, to reflect the Supreme Court decision that overturned Roe v. Wade.