The life of a priest in war-torn Ukraine 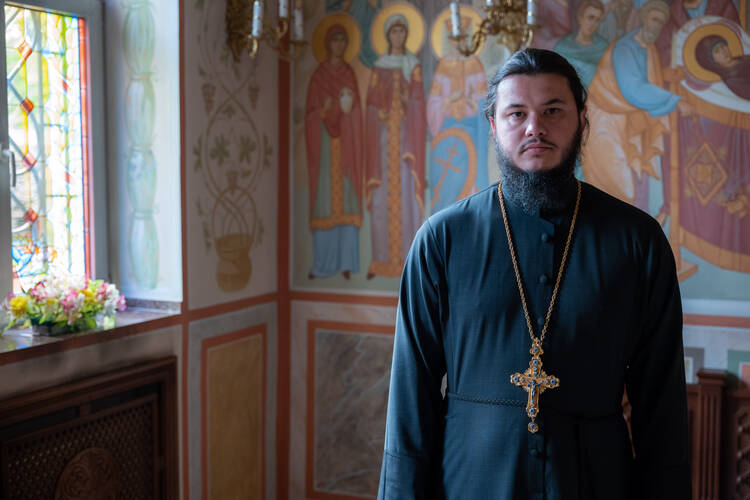 The city of Odesa in southwestern Ukraine is only a dozen miles or so from the front line where Russian and Ukrainian armies have been trading artillery fire since the Russian invasion began on Feb. 24. Despite the warring armies so close by, in Odesa life goes on. Parks are filled with families walking with their children and shops are open although barricaded. When an air raid siren sounds, only a few people actually run for the shelters.

But Russian missile strikes have claimed civilian lives in Odesa, and the fear of an indiscriminate attack is ever present, hidden behind the smiles of the inhabitants and their apparent resilience. Odesans turn to their faith to deal with anxiety and sadness, but even church ground is not completely safe from this war.

On May 2, the area around the Holy Iveron monastery in Odesa was struck by a rocket and a teenage boy was killed and his sister wounded. The church itself was partially damaged. At least 59 religious sites have been damaged or destroyed across Ukraine since the beginning of the Russian invasion. Some sites were tagged with the infamous “Z” used by the Russian soldiers to mark their equipment in an effort to prevent friendly-fire incidents. Twelve priests have been killed so far.

Russian missile strikes have claimed civilian lives. Odesans turn to their faith to deal with anxiety and sadness, but even church ground is not completely safe from this war.

“Russia claims to be an Orthodox country, but the Saturday before Easter they refused to sign [an Easter truce], proposed by Ukraine. This is not Christian behavior,” said Archpriest Maximian Pogorelovskiy, a spokesperson for the Orthodox Diocese of Odesa. Wary of an attack and at the urging of government officials who asked Odesans to avoid large gatherings, the diocese canceled Easter Vigil and all public celebrations of Easter, commemorated by the Orthodox Church on April 24, this year.

The Orthodox Divine Liturgy on Easter was celebrated with only clergy present, but the faithful of Odesa were allowed to visit churches during daylight; many left offerings like traditional painted Easter eggs and cakes, which were distributed among those from surrounding communities who had fled to Odesa to escape the fighting. The faithful also individually visited churches over several days after Easter to receive a blessing from their priests.

In Ukraine, there are two Orthodox churches—one that remains under the authority of the Moscow Patriarchate and the other formed as an independent Orthodox Church of Ukraine after it was granted autocephaly (self-governorship) in 2019 by Ecumenical Patriarch Bartholomew I. The drive for an independent church followed the annexation of Crimea and the occupation of Donbass by Russia in 2014.

At the end of February, the Synod of Bishops of Ukraine appealed to Russian Patriarch Kirill to intervene with the Russian authorities to stop the war, without success.

At the end of February, the Synod of Bishops of Ukraine appealed to the Russian Patriarch Kirill to intervene with the Russian authorities to stop the war, without success.

Priests who have begun to publicly denounce Russian conduct during the war are placing themselves in danger, he said. This is certainly the case for Father Pogorelovskiy, who often comments on social network sites to denounce the war and expressions of support for it in Russia. He said he was unconcerned about possible retaliation should Russian forces eventually succeed in seizing Odesa.

“What must happen will happen,” he said.

“The church of Odesa shares the pain of its inhabitants. The church is not a building; it is people,” said Father Pogorelovskiy. The independent Orthodox Church of Ukraine is represented throughout the nation, including in regions occupied by the Russian army or separatist forces. That unity before the Russian threat is greatly encouraging to Father Pogorelovskiy. “Despite the politics, the Ukrainian Orthodox Church is everywhere in Ukraine,” he said.

Faced with the upheaval of the war, the Orthodox Church has been transforming itself into an emergency resource for the people, offering church buildings as bomb shelters and sponsoring humanitarian assistance. Each church is preparing to help those who have fled the fighting.

“We have organized distributions of bread and water, for example, in Mykolaiv,” Father Pogorelovskiy said. It is an extra duty that comes easily to him. In addition to his clerical duties, Father Pogorelovskiy supplements his family income—he and his wife have two children—by working as a baker.

Mykolaiv is a two-hour drive East from Odesa; it has been without running water for over three weeks because of Russian shelling. Church members offer accommodation and food when they can to people fleeing the fighting, many of whom are escaping homes and villages demolished by combat. “But above all, we pray,” Father Pogorelovskiy said. “We pray a lot.”

“The church of Odesa shares the pain of its inhabitants. The church is not a building; it is people.”

On the social networks of the Diocese of Odesa, photos of priests alongside food donations are numerous, encouraging Odesans to donate to others and above all to share information about the war and ways to help out. The church participates vigorously in this collective effort.

At the Cathedral of the Assumption, in the center of Odesa, priests have been running a 24-hour prayer service. Some believers come in to silently watch; others follow the priests in prayer. “The priests come from all the churches around the city, and usually stay for several hours before a relay arrives,” explains a merchant selling candles at the entrance of the church. “They pray for peace,” she said. “They pray [with an icon of] the Mother of God, Mary, called Kasperovskaya here.”

Miraculous powers have been attributed to the icon. “She saved Odesa several times, including during World War II, so we turn to her,” Father Pogorelovskiy explained.

On this day in early May at the cathedral, five priests in prayer are not alone. About 15 faithful have joined them.

Benches have been removed from all the churches in the country; the Divine Liturgy is celebrated standing up in case a rapid evacuation to a shelter is required. The faithful have been coming more often to church these days, according to Father Pogorelovskiy.

Staying focused on prayer “when you hear bombs is very difficult.” But the church has become a place of refuge for the population, especially when air raid sirens begin sounding.

“We come to church especially in this time of war,” Ludmila, who declined to share her last name, agreed. She was accompanied at the cathedral by her husband and her 4-year-old daughter on May 1. “We ask God for his salvation, for us and for our loved ones. We also ask God to protect us, our family, but also our Ukraine,” she said. “We simply ask God for peace.”

Orthodox traditions offer comfort, too. Nadiya, who declined to share her last name, explained one morning that she had visited five churches that day, “and in each one I wrote the name of my grandfather who is recovering from Covid.” She pays a church guide between 20 and 50 grivnas—30 cents to $1.60—for the “Sokoroust” prayer.

“We write the name of a sick person on a paper, and for 40 days the priest will pray for this person. This is very common here, and it is also possible when a person has passed away, so the priest guides his soul to heaven.”

Staying focused on prayer “when you hear bombs is very difficult,” said Father Pogorelovskiy. But the church has become a place of refuge for the population, especially when air raid sirens begin sounding.

“We see new people who did not come to the church before,” he said. “They come to pray, often in tears.” Many Odesans have already fled, anticipating that Odesa may share the same fate as Mariupol or other cities targeted by the Russians.

Father Pogorelovskiy said that about 70 percent of his parishioners have become refugees from the fighting. But he, like other Odesan priests, is determined to stay and share the city’s fate. “We priests,” he said, “none of us want to leave our city.”

Correction: Odesa was updated to the current preferred spelling throughout the report. 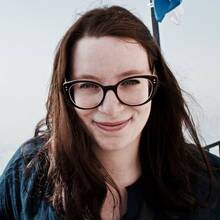 Clotilde Bigot is a freelance journalist based in Beirut, Lebanon.

@Clo_Bigot
Show Comments ()
Join the conversation: Login or create an account
Before you can comment, you need to update your profile to include your first and last name, as required in our comments policy. Then reload this page and you'll be set up for commenting. Update your profile