Explainer: Understanding Orthodoxy, the shared religion of Ukraine and Russia 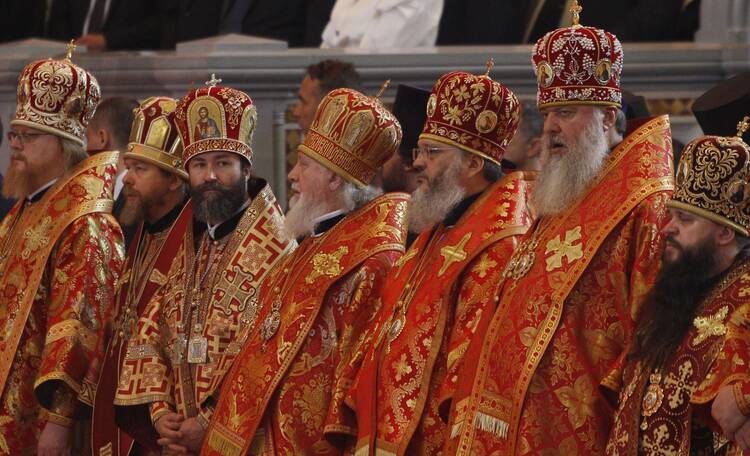 Bishops are pictured as Russian Orthodox Patriarch Kirill of Moscow celebrates the Divine Liturgy at the Cathedral of Christ the Savior in Moscow on May 24, 2017. (CNS photo/Robert Duncan)

Patriarch Bartholomew of Constantinople, a leading authority of the Eastern Orthodox Church, quickly condemned the “unprovoked invasion of Ukraine.”

By contrast, Patriarch Kirill of Moscow, the head of the Russian Orthodox Church, has supported the war, which he claimed in a sermon was a struggle to defend “human civilization” against the “sin” of “gay-pride parades.”

As a scholar who has spent several decades studying religion in Russia, I’m following the debates within the Orthodox Church very closely. To better understand the current conflict, it is helpful to know more about the structure and history of Orthodox Christianity.

What is the Orthodox Church?

Orthodoxy is the smallest of the three major branches of Christianity, which also includes Catholicism and Protestantism. There are about 1.34 billion Catholics, about 600 million Protestants and approximately 300 million Orthodox Christians globally. Most Orthodox Christians live in Russia, Eastern Europe, the Caucasus and the Middle East.

The word “orthodox” means both “right belief” and “right worship,” and Orthodox Christians insist on the universal truth of their doctrine and practice.

Like the Roman Catholic Church, the Orthodox Church claims to be the one true church established by Christ and his apostles.

Unlike the Roman Catholic Church, which is led by the pope, the worldwide Orthodox Church has no single spiritual head. Instead, the global Orthodox communion is divided into autocephalous churches. Formed from two Greek roots, the word “autocephalous” means “self-headed.”

Autocephalous churches are completely independent and self-governing. Each autocephalous Orthodox church has its own head, a bishop who presides over the territory of his church. Some, but not all, of these presiding bishops bear the title patriarch.

The worldwide Orthodox Church has no single spiritual head. Instead, the global Orthodox communion is divided into autocephalous churches.

The number of autocephalous churches has varied over time. The four oldest patriarchates—Constantinople, Alexandria, Antioch and Jerusalem—were important religious and political centers in the Byzantine Empire. When Orthodox missionaries brought their faith to other countries, patriarchates were established in Bulgaria in the year 927, in Serbia in 1346 and in Moscow in 1589. In the 19th and 20th centuries, as the Ottoman and Russian empires fell apart, new autocephalous churches were formed in the new nations of Greece, Romania, Poland and Albania, between 1850 and 1937.

Currently there are 14 autocephalous Orthodox churches that are universally recognized in the global Orthodox community. All these autocephalous churches share the same faith and sacraments.

In Ukraine, Orthodox believers are divided between two competing church structures. The Orthodox Church of Ukraine, which was created only in 2018, is autocephalous. The Ukrainian Orthodox Church-Moscow Patriarchate is under the spiritual authority of Patriarch Kirill of Moscow. Both Ukrainian churches have sharply condemned Russia’s unprovoked war against Ukraine.

Until the 11th century, the Orthodox churches recognized the Roman Catholic Church as one of the autocephalous Orthodox churches. By 1054, however, differences in theology, practice and church government led the pope and the patriarch of Constantinople to excommunicate each other. In particular, the pope claimed to have authority over all Christians, not just the Christians within his autocephalous church. The Orthodox Church rejected this claim.

These mutual excommunications were lifted only in 1965. In 1980, the 14 autocephalous Orthodox churches and the Roman Catholic Church created the Joint International Commission for Theological Dialogue to discuss the difficult issues that continue to divide them. These talks suffered a major blow in 2018 when the Russian Orthodox Church suspended its participation to protest the creation of a new autocephalous church in Ukraine.

The Orthodox Church is hierarchical. Spiritual authority is invested in an ordained clergy consisting of bishops, priests and deacons.

Like the Catholic Church, the Orthodox Church holds to the doctrine of apostolic succession. According to this doctrine, Orthodox bishops, who rule over the territory of a diocese, are the direct, historical successors of the apostles. Bishops are exclusively male. They must also be monks and must observe a vow of celibacy.

Priests and deacons, who are ordained by the bishops, lead the spiritual and ritual life of Orthodox Christians in the parishes. Unlike the bishops, parish priests are usually married. While priests must be male and most deacons are male, some women have been ordained as deaconesses since the early Christian period.

In 1054, differences in theology, practice and church government led the pope and the patriarch of Constantinople to excommunicate each other.

Orthodox spiritual life is centered on the sacraments, or “mysteries,” usually celebrated by the parish priest. The first sacrament, baptism, is a rite of initiation into Christian life.

Most Orthodox Christians are baptized as infants by triple immersion in holy water.

Immediately, a baptized infant also receives two other sacraments. The priest anoints the child with chrism, a special oil prepared by bishops during Holy Week. The priest also gives the baby Communion, the consecrated bread and wine that have mystically become the body and blood of Christ.

Like Catholics and most Protestants, Orthodox Christians regularly celebrate the Eucharist. This central sacrament of the Orthodox Church is known as the Divine Liturgy.

Like Catholics, Orthodox Christians regularly confess their sins to their priest in the sacrament of penance. Marriage, ordination and the anointing of the sick with holy oil are also recognized as sacraments.

Icons—consecrated images of holy persons or events—play an important role in Orthodox Church life. Orthodox churches are filled with these images, which believers honor with kisses and bows.

In Orthodox theology, icons are a testimony to the doctrine that God became human in Christ. Because he was a human, he could be represented artistically. Likewise, the saints, who are believed to be filled with the spirit of Christ, can be portrayed and venerated in icons.

Orthodox theologians carefully distinguish between worship, which is offered to God alone, and veneration, which is appropriate for icons.

Orthodox Christians form a worldwide community of increasing importance. After the fall of communism in Russia and Eastern Europe, the Orthodox churches of these countries have grown in numbers and in political influence.