War, Covid-19 and climate change have collided to bring about another global crisis: hunger 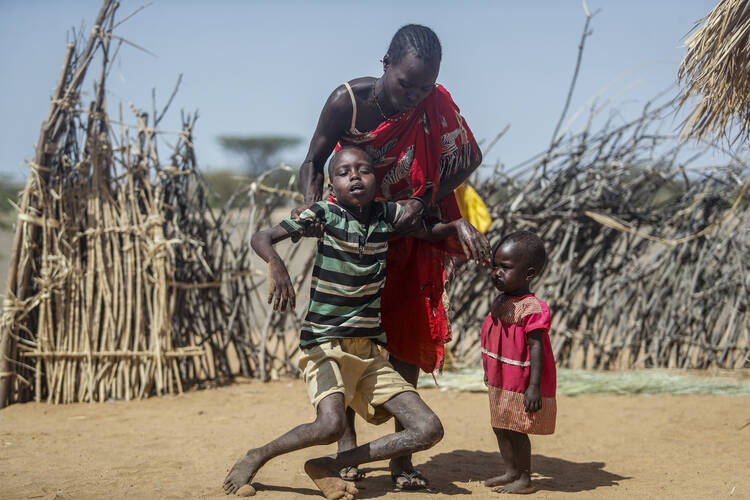 A mother helps her malnourished son stand after he collapsed near their hut in the village of Lomoputh in northern Kenya, on May 12, 2022. United Nations Under-Secretary-General for Humanitarian Affairs Martin Griffiths visited the area on Thursday to see the effects of the drought which the U.N. says is a severe climate-induced humanitarian emergency in the Horn of Africa. (AP Photo/Brian Inganga)

Surveying conditions across East Africa, Shaun Ferris does not like what he sees. Continuing drought and erratic temperatures and rainfall are disrupting the sowing and harvesting strategies of the region’s farmers. Some are turning for the first time to irrigation methods that will add new pressure to withering ecosystems.

Covid and conflict have had a devastating impact across East Africa and the Sahel region, he said. Unemployment and hunger are rising together. The tourist industry has been hard hit; hotels and restaurants have closed. Working people have been returning to home villages that have been devastated by four years of drought.

Long before Vladimir Putin’s war on Ukraine, small conflicts—what Pope Francis has described as a “piecemeal” third world war—have been displacing people and disrupting growing seasons and food markets around the world.

Mr. Ferris, speaking from Nairobi, Kenya, is the director of agriculture and livelihoods for Catholic Relief Services. Inflation is making food too expensive for the poor, and it is putting agriculture inputs—fuel, seed, fertilizer—out of reach for farmers, he said. They may sow much less or not at all this season.

Americans may be shocked by the price increases they have experienced in recent months that amount to an annual inflation rate of over 8 percent. But in Sudan, consumers have been contending with annual inflation that has ranged between 220 and more than 300 percent, Mr. Ferris pointed out. Other developing nations in Africa have endured rates between 15 and 66 percent.

Mr. Ferris is coordinating the agency’s regional response to an emerging hunger crisis that threatens 15 million people across East Africa, including two million children who are near starvation.

In some pastoralist communities, he reported, herders have lost 70 percent of their livestock to heat and evaporating watering holes. “About one and a half million livestock were lost in Kenya,” Mr. Ferris said, “and up to two million in Ethiopia. I can’t imagine that it is any better in Somalia and the livestock areas in northeast Uganda, northern Kenya, and then southern Ethiopia.”

In all of these regions, he said, “you have very culturally traditional livestock herders. They don’t grow any crops; they just live on milk and sales of meat. And if they lose their ‘crop,’ their livestock, that’s it.”

It will take a decade, according to Mr. Ferris, for those pastoralist villagers to rebuild from such a loss.

He was already worried about hunger before the Russian war on Ukraine threw global energy and food markets into even greater upheaval. Everything he is seeing now suggests that hunger will become an even greater threat soon.

A ‘breathtaking’ but predictable crisis

A global pandemic, supply chain breakdowns, drought driven by climate change, inflation spikes not seen in decades, and now a war on the European continent between two nations that normally perform the role of global breadbasket: If an omnipotent, evil genius somewhere were trying to stir together geopolitical calamities sure to end in an unprecedented hunger disaster, he could hardly do better than the conditions depicted in contemporary headlines.

According to the World Food Program, 276 million people worldwide were already facing acute hunger at the start of 2022. That number is expected to rise by 47 million people if the conflict in Ukraine continues, with the steepest increases in sub-Saharan Africa.

Bill O’Keefe, Catholic Relief Services’ executive vice president for mission and mobilization, agreed that the current convergence of crises is breathtaking. At the same time, he said, the looming hunger crisis does not come as a complete shock.

Long before Vladimir Putin’s war on Ukraine, small conflicts—what Pope Francis has described as a “piecemeal” third world war—have been displacing people and disrupting growing seasons and food markets in Yemen, Ethiopia, Afghanistan, Iraq, East Africa, the Sahel and other nations and regions around the world. “Covid, climate change and conflict are force multipliers of hunger and poverty, and that’s what we’re seeing,” Mr. O’Keefe said.

“The people at the bottom are going to find it much more difficult to buy food” and agencies like Catholic Relief Services will struggle to “stretch dollars to meet needs.”

“Because the Ukraine conflict is worse than the other conflicts and involves parts of the world that produce key agricultural products, it’s kind of sped up [the potential hunger disaster], but the basic underlying drivers of this situation have been in place for years,” Mr. O’Keefe said.

He added that, as Pope Francis has frequently pointed out, Covid is exposing all of the weaknesses and contradictions of the global market in finance, goods and commodities, as well as “our system’s failure to meet [the] needs” of the world’s most vulnerable people.

That grim assessment is not meant to diminish the immediate cascading impacts deriving from the drama in Ukraine.

The direct losses to the global market because of the war create secondary effects, Mr. O’Keefe said. Even states that do not import from Ukraine or Russia will have to pay more for what food commodities are available. That will drive price spikes across markets for farmers, herders and, finally, consumers.

“The people at the bottom are going to find it much more difficult to buy food,” said Mr. O’Keefe. A “tertiary impact” will land on relief and development agencies like C.R.S., “trying to stretch dollars to meet needs.”

“In Madagascar, for example, for our food assistance program, the prices of food that we have to buy are up 200 to 300 percent,” Mr. O’Keefe said. That could mean half rations for the world’s already hungry people, as “fewer people can be assisted for the same amount of money.”

European powers may be too distracted by Russia’s war on Ukraine to properly attend to crisis overflow from other parts of the world.

How bad could hunger get? Mr. O’Keefe rattles off some alarming figures. In Afghanistan after years of conflict, drought and now financial collapse and political instability, seven to 10 million are threatened by hunger and another 10 million are food insecure. In a third year of drought in the Horn of Africa, with “coping mechanisms” worn out and family and farm assets being sold for survival, another “20 million plus” will need assistance. Millions more around the world will be facing hunger in a matter of months.

The good news, according to Mr. O’Keefe, is that the Biden administration is taking action now, attaching $5 billion in global humanitarian aid to its latest supplemental $40 billion package for Ukraine. The plan passed the Senate on May 19, overcoming resistance from Senator Rand Paul, a Republican from Kentucky, and President Joe Biden is expected to sign off on the aid soon.

Mr. O’Keefe does worry that European powers will be too distracted by Russia’s war on Ukraine to properly attend to crisis overflow from other parts of the world, and especially that European leaders may become reluctant to commit to new spending while their own economic and food security remain in flux because of the war. Sweden provided evidence that such concerns are warranted. It announced in April that it planned to divert 20 percent of its foreign aid budget to its emergency program to resettle more than 76,000 Ukrainian refugees this year.

“In other words, Sweden will become the biggest recipient of its own development aid,” Carl Björkman, an analyst at the Bill & Melinda Gates Foundation, told Devex, an independent news organization covering international relief issues.

Breaking free of ‘panic and neglect’

Proactive efforts over the next growing and harvest seasons will be critical to avoid a worst-case hunger catastrophe. But ultimately Mr. O’Keefe and other church actors in humanitarian aid hope to break out of recurring cycles of panic and neglect, a pattern typified, he said, by the U.S. response to Covid-19—vigorous masking and vaccination campaigns embraced and abandoned as numbers and political resistance fluctuated. In the end the overall effort allowed the illness to become endemic.

Proactive efforts over the next growing and harvest seasons will be critical to avoid a worst-case hunger catastrophe.

“We just learned in the last couple of weeks that the number of people who have died around the world is not 5 million, but 15 million, and the number of people in our own country is over a million.” But despite those numbers, “the appetite for continuing to fight this globally so that there aren’t more variants and that people overseas have the same protections that we have here” has diminished dramatically.

“It’s the same with climate change,” Mr. O’Keefe said. “The country has not fully grappled with the seriousness of the problem because we just can’t seem to keep our eye on these bigger, long-term trends long enough to make progress on them.”

That could be a fruitful role for U.S. Catholic voters and taxpayers, he suggested—demanding patience and persistence from politicians on complex and challenging global threats.

By way of example he noted that the $5 billion proposed for humanitarian assistance was approved just a few weeks after $5 billion had been quietly stripped from America’s international Covid-19 response.

“That’s a problem,” Mr. O’Keefe said. “We have to be able to do two things at once—respond to humanitarian needs and also continue to vaccinate people around the world and lay the groundwork for the…lessening of the impact of Covid.”

A vigorous response to the crisis in Ukraine “doesn’t mean that Afghanistan went away,” said Mr. O’Keefe. “And when we were dealing with Afghanistan, that didn’t mean that Covid went away.”

“The challenge, really for all Americans, but for Catholics in particular, is not to follow the media in its movement from crisis to crisis,” Mr. O’Keefe said. “We have to keep our eye on the prize even as we meet short-term needs.”