An unlikely role model for a more human abortion debate 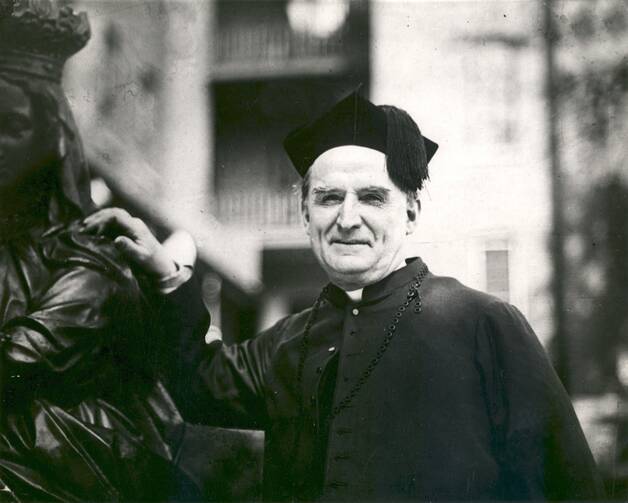 Msgr. Nelson Baker, a Buffalo, N.Y., priest who died in 1936, was declared worthy of veneration in 2011, the first major step on the path to sainthood. (CNS photo/courtesy Western New York Catholic)

In the summer of 1869, a 27-year-old Buffalo businessman and veteran of the Battle of Gettysburg boarded a steamship and set out on a weeks-long tour of the shoreline of Lake Erie. Like many others his age before and since, Nelson Henry Baker was in search of that someone or something that would give meaning and direction to his life. By summer’s end he knew what it was: He wanted to be a priest.

So the following autumn Nelson Baker entered the seminary in Buffalo. During a pilgrimage to Europe with his fellow seminarians, he had a profound spiritual experience at the shrine of Our Lady of Victories in Paris and at once resolved to return to his hometown and spend his life in her service. What followed was a breathtaking, trailblazing six-decades-long apostolic career that rivals the earthly accomplishments of our greatest saints. In Lackawanna, N.Y., just south of Buffalo, Father Baker built what amounted to a small “city of charity”—a network of hospitals, schools, orphanages and other social services that in his time would serve tens of thousands of people and serves thousands more even today.

Father Baker did not act just to save the infants’ lives; he worked to save the lives and reputations of the mothers as well.

I visited this Baker-ville and its one-of-a-kind French Rococo minor basilica the week after we learned that the U.S. Supreme Court is likely to overturn Roe v. Wade, the case that established a constitutional right to abortion. One might think that this news, as well as the fiercely contested debate that it has sparked, are light years away from Father Baker’s America, that his time has little to say to ours. And yet an important part of his story suggests otherwise.

In the spring of 1906, Father Baker started to read newspaper accounts of babies who had been abandoned, including “the remains of over two hundred little ones...found in different stages of decay” in the Buffalo area. His biographer describes his response: “Mortified at such a wanton destruction of life, Baker, always a man of action, knew something needed to be done.” He quickly established a home where mothers could leave their babies anonymously, no questions asked. But Father Baker did not act just to save the infants’ lives; he worked to save the lives and reputations of the mothers as well. “Our motive has been, regardless of experience,” he wrote, “to protect the unfortunate young mother and her family, and to save the life of the child.”

Nelson Baker then was quick to recognize two realities, one of which is usually disregarded in conversations about abortion, then and now. Father Baker was rightly horrified by the intentional killing of these vulnerable human beings. And he was also rightly horrified by the fact that he lived in a world in which women could be driven to such extremes. In his revulsion, Father Baker could have hardened his heart and turned in self-righteous rage against these mothers. Instead, he extended the same compassion to them that had caused his heart to break when reading reports about their babies, reasoning that any woman who could summon the will to override her primordial maternal instinct and take her child’s life had to be someone in desperate straits, someone as worthy of our mercy as her children were.

We need fewer polemics and much more compassion, especially of the kind Venerable Father Baker put into action.

Debates about abortion today are too often polemical, impersonal, unfeeling. Too many on both sides resort to name-calling, to uncharitable hyperbole, or cruel caricatures. People who are pro-choice are called “baby killers.” People who are pro-life are said to be “waging a war against women.” Neither charge is fair or helpful, or human. “What is most needed in the public debate on abortion,” the editors write in this issue, “is an honest moral reckoning with the two goods that are in tension when a woman faces a pregnancy she feels she cannot continue: her bodily integrity and personal autonomy, and the dignity of the unborn life that is entirely dependent on her.”

Another way of putting that? We need fewer polemics and much more compassion, especially of the kind Venerable Father Baker put into action. What he started as a home for infants who had been abandoned by their mothers rapidly grew to become a maternity hospital as well, where unwed or troubled pregnant women could be cared for in safety and anonymity. In time, that became Our Lady of Victory Hospital, which served the people of Lackawanna—men, women and children—for more than 80 years.

All that happened because Father Baker opened his heart and mind to the people around him, a choice that also set him on his path to sainthood. In writing to the benefactors of his home for infants and mothers, Father Baker would often include this sentence: “The spirit of charity will surely save innumerable souls.”