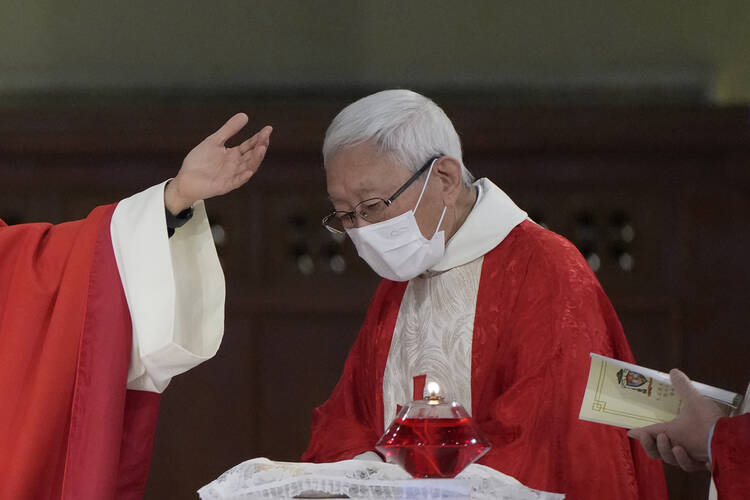 Retired archbishop of Hong Kong Joseph Zen, attends the episcopal ordination ceremony of Bishop Stephen Chow, in Hong Kong, Saturday, Dec. 4, 2021. Zen, the 90-year-old Catholic cleric arrested by Hong Kong police on national security charges, has long been a fiery critic of Beijing, along with efforts by the Vatican to reach a working arrangement with the ruling Communist Party. (AP Photo/Kin Cheung)

The arrest of Cardinal Joseph Zen sent shockwaves throughout the Catholic world. While the move was widely denounced by governments and human rights groups, Catholic entities and individuals offered varying degrees of condemnation, reflecting the gravity and delicacy of a situation that has escalated dramatically.

​​Cardinal Zen left a police station on bail Wednesday night following his arrest alongside other former trustees of the 612 Humanitarian Support Fund, which provides assistance to people arrested during 2019 anti-government protests. The former Hong Kong bishop has not yet commented on his arrest.

The Diocese of Hong Kong, of which Cardinal Zen was the sixth bishop, sent the following statement to the media on May 12:

The Catholic Diocese of Hong Kong is extremely concerned about the condition and safety of Cardinal Joseph Zen and we are offering our special prayers for him. We have always upheld the rule of law. We trust that in the future we will continue enjoying religious freedom in Hong Kong under the Basic Law. We urge the Hong Kong Police and the judicial authorities to handle Cardinal Zen's case in accordance with justice, taking into consideration our concrete human situation. As Christians, it is our firm belief that: “The LORD is my shepherd; there is nothing I lack” [Ps 23:1].

Hong Kong’s current bishop, Stephen Chow, S.J., who was consecrated last December, posted on Facebook: “I have spoken with Cardinal Zen. He told me to let his friends know that he is fine. Not to worry. And he wants us to take a low profile approach for him.”

Responding to queries from journalists after the arrest, Vatican spokesman Matteo Bruni said that “the Holy See has learned with concern the news of the arrest of Cardinal Zen and is following with extreme attention to the development of the situation.”

While the arrest was widely denounced by governments and human rights groups, Catholic entities offered varying degrees of condemnation.

In a statement on May 14, Cardinal Charles Bo, the archbishop of Yangon, Myanmar, and president of the Federation of Asian Bishops’ Conferences, lamented the authoritarian turn in Hong Kong, which he said “used to be one of Asia’s freest and most open cities.”

“To see a city that was a beacon for freedom, including religious freedom, move so radically and swiftly down a much darker and more repressive path is heartbreaking,” the cardinal said. He urged Christians everywhere to pray for Cardinal Zen “as well as the Uyghurs, Tibetans and others facing persecution in China” on May 24, the World Day of Prayer for the Church in China.

The U.S.-China Catholic Association, whose mission is “to build bridges of friendship and dialogue between people of China and the United States,” issued a statement in an email: “While all members of the Church, including cardinals, should follow those civil laws that do not violate justice, we can rightly ask whether Cardinal Zen’s work for the 612 Humanitarian Relief Fund was subversive of the state or whether it in fact promoted the health of the state and its adherence to the highest standards of justice.”

The statement continued, “Indeed, many residents of Hong Kong do not consider Cardinal Zen anti-Chinese, but rather consider him a great patriot.”

Born into a Catholic family in Shanghai in 1932, Zen left for Hong Kong, then a British colony, in 1948, a year before the Communist takeover of the mainland.

He was appointed Hong Kong’s coadjutor bishop in 1996, the year before Britain handed control of the city to Beijing. He frequently drew the wrath of China’s Communist leaders, who called him a “Vatican agent.”

Cardinal Zen frequently drew the wrath of China’s Communist leaders, who called him a “Vatican agent.”

Cardinal Zen backed the city’s pro-democracy movement and was an outspoken critic of proposed anti-subversion legislation that officials were forced to shelve. He went on a three-day hunger strike to protest a government plan to curtail the influence of churches in publicly funded schools.

The Rev. Gianni Criveller—an Italian PIME missionary and China expert who worked with Cardinal Zen for a long time in Hong Kong—wrote, in a commentary on the cardinal’s arrest, that “for those like me who experienced formidable years alongside the cardinal, it will remain a day of unforgettable sadness.”

Father Criveller recalled that the cardinal is 90 years old and “feels the frailty of his age.” Moreover, “he lives modestly in the residence of the Salesians in Hong Kong, a priest among others, without the shade of luxuries and privileges. He is a brave man, the noble father of the democracy movement, the leader of an entire civic community.”

Father Criveller denounced the arrest as “a completely political, demonstrative, intimidating and dare I say, even quite inhumane act.”

Father Criveller further denounced the arrest as “a completely political, demonstrative, intimidating and dare I say, even quite inhumane act. Can one arrest a 90-year-old man whom millions of people around the world look up to and respect?”

A police statement said that Cardinal Zen and the former trustees of the 612 Humanitarian Support Fund were suspected of endangering national security by making requests of foreign countries or overseas agencies, and calling for sanctions against Hong Kong.

While expressing “relief” that the cardinal was released on bail and not imprisoned as are many other “democratic friends,” Father Criveller said that “the unbearable gravity of the arrest remains” and predicted “there will be a trial, hateful charges aimed at discrediting a noble and generous person.”

“Even more difficult months and years await the Catholic Church in Hong Kong,” he said. Furthermore, “the wonderful people of Hong Kong will not be able to live in freedom and democracy.”

Gerard O’Connell and Zac Davis contributed to this report.