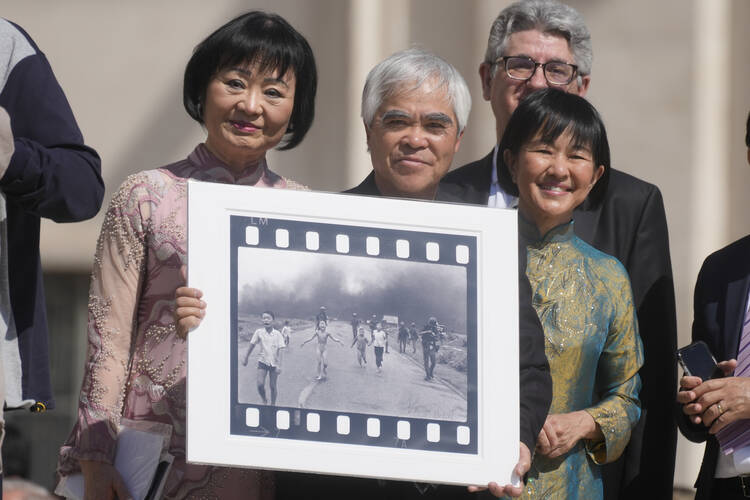 Nick Ut, center, flanked on the left by Kim Phuc—the girl from the picture—holds “Napalm Girl,” his Pulitzer Prize-winning photo, as they wait to meet with Pope Francis  Wednesday, May 11, 2022. (AP Photo/Gregorio Borgia)

VATICAN CITY (AP) — Nick Ut, a retired Associated Press photographer, met Wednesday with Pope Francis and gave him a copy of his Pulitzer Prize-winning photograph of a young Vietnamese girl running naked down the road after a napalm attack.

Ut and Kim Phuc Phan Thi, whose terror the A.P. photographer captured on June 8, 1972 during the Vietnam War, greeted Francis at the end of his general audience Wednesday in St. Peter’s Square, ahead of the 50th anniversary of the iconic image.

Kim Phuc, who later resettled in Canada and raised a family there, had met the former Cardinal Jorge Mario Bergoglio several years ago in his native Buenos Aires, Argentina, where she had traveled as part of her work as a goodwill ambassador for the U.N. culture agency.

Nick Ut, a retired Associated Press photographer, gave Pope Francis a copy of his Pulitzer Prize-winning photograph of a young Vietnamese girl running naked down the road after a napalm attack.

“He looked at the picture and remembered her right away,” Ut told The A.P. in the piazza moments after the encounter. Kim Phuc said she wasn’t sure Francis would remember her, given the hundreds of people he meets every day.

“But he remembered very well. He said ‘I remember you, I know you. Do you remember we met each other in Buenos Aires?’ and I said ‘Yes I do. I said ‘God bless you with good health and for all you have done for peace.’”

Ut and Kim Phuc were in Italy to open an exhibit of his photographs in Milan ahead of the anniversary of his “Napalm Girl” photograph. Such images have a potent effect on Francis: He has previously handed out pocket-sized copies of another wartime photograph of a young Nagasaki boy carrying his dead brother on his back that was taken by an American military photographer during World War II.

“He looked at the picture and remembered her right away,” Ut told The A.P. in the piazza moments after the encounter.

Francis, who named himself after the peace-loving St. Francis of Assisi, had printed on the photo “The fruit of war.”

Ut was only 21 when he took the Vietnam photo, then set his camera aside to rush the 9-year-old Kim Phuc to a hospital, where doctors saved her life.

“It was only me with my driver there, then I said I don’t want to leave because I know she will die,” Ut recalled. “Then I picked her up, put her in the van and I brought her to the hospital.”

Ut later became an A.P. photographer based in Los Angeles, photographing A-list celebrities until he retired from the news agency in 2017.

Recalling the horror of that day, Kim Phuc said that 50 years ago she was known to the world only as a victim of war.

“But right now, 50 years later, I am no longer a victim of war. I am a mother, a grandmother and a survivor calling out for peace,” she said.