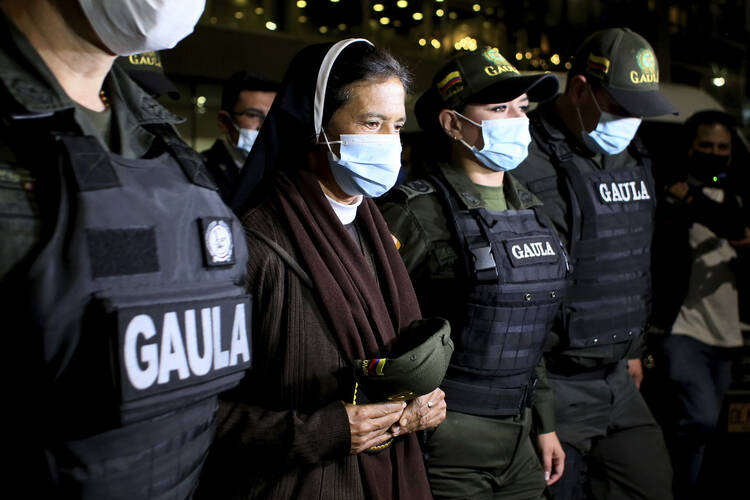 Colombian nun Gloria Cecilia Narvaez, second from left, is escorted by police after her arrival at El Dorado airport in Bogota, Colombia, in this Tuesday, Nov. 16, 2021 file photo, after she was released on Oct. 10 by her kidnappers. (AP Photo/Leonardo Muñoz)

Cardinal Angelo Becciu’s bombshell testimony could pose serious security implications for the Vatican and Catholic Church, since he provided evidence that the pope was apparently willing to pay ransom to Islamic militants to free a nun, who was eventually let go last year.

Ransom payments are rarely if ever confirmed, precisely to dissuade future kidnappings, and it’s not known how much, if any, Vatican money actually ended up in the hands of the militants. Prosecutors have accused a Becciu co-defendant of embezzling around half the amount on high-end luxury items for herself.

Becciu, who was once one of Francis’ top advisers as the Number Two in the Vatican secretariat of state, had withheld his testimony from the Vatican tribunal for nearly two years as a matter of state and pontifical secret. But he spoke freely Thursday in his own defense after Francis released him from the confidentiality requirement, providing the most anticipated testimony of the yearlong trial to date.

Sister Gloria Cecilia Narvaez had been kidnapped by Al Qaeda in the Islamic Maghreb, which has bankrolled its insurgency by kidnapping Westerners.

Becciu is one of 10 people accused in the Vatican’s sprawling financial fraud trial, which originated in the Holy See’s 350 million euro investment in a London property and expanded to cover other alleged crimes. Prosecutors have accused the defendants of a host of crimes for allegedly fleecing the Holy See of millions of euros in fees, commissions and bad investments.

Becciu, the lone cardinal on trial, is accused of embezzlement, abuse of office and witness tampering, all of which he denies. On Thursday, his testimony covered the charges concerning his relationship with an Italian self-styled intelligence specialist, Cecilia Marogna.

Marogna has told Italian media that she helped negotiate the release of Catholic hostages in Africa on behalf of the Holy See. Vatican prosecutors accuse her of embezzling 575 million euros, citing bank records from her Slovenian holding company that show nine wire transfers from the Vatican in 2018-2019 for unspecified humanitarian ends, and expenditures out of the account at Prada, Luis Vuitton and fancy hotels. Marogna has said the transfers were reimbursements for expenditures and compensation for her services.

Becciu testified Thursday that he hired Marogna as an external security consultant, impressed by her grasp of geopolitical affairs and the trust she enjoyed of two of Italy’s top secret service officials, Generals Luciano Carta and Gianni Caravelli, who accompanied her to a meeting with Becciu in the Vatican in October 2017.

Becciu said he turned to Marogna for help following the February 2017 kidnapping of a Colombian nun, Sister Gloria Cecilia Narvaez, in Mali. She had been kidnapped by Al Qaeda in the Islamic Maghreb, which has bankrolled its insurgency by kidnapping Westerners. During her captivity, the group periodically showed Narvaez on video asking for the Vatican’s help.

Becciu said he had heard from the Vatican’s nuncio in Colombia as well as other sisters from the nun’s religious order asking for help. He said he brought the matter to Francis as well as Marogna, who he said advised him that she could work with a British intelligence firm, The Inkerman Group, to secure the nun’s release.

Becciu spoke freely Thursday in his own defense after Francis released him from the confidentiality requirement.

Becciu testified that Francis authorized him to proceed with the Inkerman operation, and forbade him from telling anyone else about it, including the Vatican’s own police chief. Francis was concerned about the security and reputational implications if the news leaked, Becciu said.

Becciu said he and Marogna met with Inkerman officials at their London office in mid-January 2018.

Inkerman officials said there were no assurances of success and that the total expenditure could reach 1 million euros, Becciu said. Because the Vatican wanted to remain external to any operation, Marogna became the key intermediary and the one to receive periodic payments from the Vatican secretariat of state for the operation, Becciu testified.

Becciu said he provided Francis a preliminary oral readout of the London meeting on Jan. 15, 2018, while the pope was en route to Peru.

“He listened to me and confirmed my intention to proceed,” Becciu testified. “In a subsequent meeting with the Holy Father, once in Rome, I spoke to him in more detail about the conversation we had with the Inkermans and the sum that we should have estimated in broad terms: about 1 million euros, part to pay for the creation of a network of contacts, and part for the effective liberation of the nun.”

“I pointed out that we shouldn’t have gone beyond that figure. He approved. I must say that every step of this operation was agreed with the Holy Father,” Becciu testified.

Narvaez was released in October, 2021, after more than four years in captivity. Soon after, she met with Francis at the Vatican.

Vatican prosecutors say they have evidence that the secretariat of state, in addition to the transfer of 575,000 euros sent to Marogna’s Slovenian accounts, sent an equivalent amount directly to a British bank account held by Inkerman.

“I must say that every step of this operation was agreed with the Holy Father,” Cardinal Becciu testified.

Becciu also responded to claims against him concerning Cardinal George Pell, who left his job as the Vatican’s financial czar in 2017 to face historic sex abuse charges in his native Australia, for which he was ultimately acquitted. Pell clashed repeatedly with Becciu during his time at the Vatican and has repeated Italian media claims that Becciu approved money transfers from the Vatican to Australia that in some way aided in the sex abuse prosecution against him.

Becciu on Thursday produced two letters to refute the claims: One from the current secretary of state, Cardinal Pietro Parolin, explaining that the 1.46 million euros that was wired to Australia was to pay for a domain name “.catholic.” And the other, a Sept. 11, 2015 letter authorizing that expenditure, signed by none other than Pell.