Supreme Court appears to side with football coach over postgame prayers 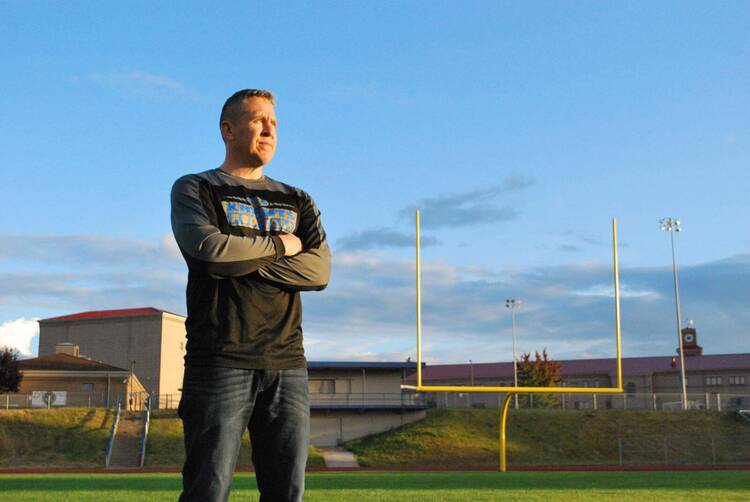 WASHINGTON (CNS) — The majority of Supreme Court justices seemed to side with a former high school football coach April 25 who said his postgame prayers on the field—that cost him his job—amounted to private speech and not the public school’s endorsement of religion.

During nearly two hours of oral arguments, several justices emphasized that private speech is still private, and protected by the First Amendment, even if it takes place on public grounds. But some justices also pointed out that this private prayer on the field could also seem coercive because players could feel like they should participate.

Prayer by teachers and coaches “kind of puts undue pressure on students to participate when they may not wish to,” said Justice Elena Kagan. “They feel like they have to join religious observations they don’t wish to join.”

Justice Brett Kavanaugh wondered about the player “who thinks, if I don’t participate in this, I won’t start next week. Every player is worried about playing time.”

The case involves Joseph Kennedy, former assistant coach at Bremerton High School, outside of Seattle, who had been told by school district officials to stop these prayers on the 50-yard line. When his contract was not renewed, he sued the school for violating his First Amendment rights.

One player’s parent said their son, an atheist, felt like he had to join in prayer or face potential loss of playing time.

A lower court agreed with the school district, bringing Kennedy to the nation’s high court seeking a reversal.

Kennedy’s lawyer, Paul Clement, stressed that the “government doesn’t endorse all private speech just because it takes place on school grounds,” and said there was no evidence that students felt coerced to join in.

But Richard Katskee, representing the school district, pointed out that Kennedy “insisted on giving audible prayers that students could join, and then he created a zoo on the field.”

The justices also brought up a number of hypothetical situations that seemed to emphasize that they did not think Kennedy’s actions on the field equaled government endorsement—such as coaches who cross themselves before a game or a math teacher who reads the Bible aloud before school starts.

Richard Garnett, Notre Dame professor of law and director of the Notre Dame Program on Church, State and Society, said he was encouraged to see many justices skeptical of the school district’s argument that it had to censor Coach Kennedy’s private prayer in order to avoid any appearance that it had ‘endorsed’ his religious beliefs.”

In a statement, he said the case was not about “reimposing prayer in public-school classrooms. Instead, it is a case about protecting all individuals’ right to speak freely—and to pray—in the public square.”

An amicus brief filed in this case by Notre Dame Law School’s Religious Liberty Initiative said the court should “remind lower courts and regulators that the Establishment Clause of the First Amendment is not an excuse for censorship.” The group also the court should clarify its doctrines and “discard” the “unworkable” and unjustified so-called endorsement test.

The “Lemon test,” which came up frequently in oral argument about the coach’s prayer, is based on a 1971 Supreme Court case Lemon v. Kurtzman and used to determine if a law violates the First Amendment.

The coach said he made a commitment to thank God after each game, win or lose, since he started coaching in 2008, and made it a point to kneel by the sideline after the game by himself for quiet prayer. Eventually, he was joined in this practice by many of the team members.

School district officials told Mr. Kennedy to stop the postgame prayers in keeping in line with the Constitution’s Establishment Clause.

One player’s parent said their son, an atheist, felt like he had to join in prayer or face potential loss of playing time.

School district officials told Kennedy to stop the postgame prayers in keeping in line with the Constitution’s Establishment Clause prohibiting the government from favoring one religion over another.

Kennedy asked the school to just give him 15 seconds to kneel on the field for silent prayer when the players were off the field, which the school district officials denied, calling it a violation of policy. Instead, the school district offered to give the coach a private space to pray or said it would allow him to pray after the crowd had left the stadium.

Kennedy’s announcement that he would not comply prompted a large group of supporters—including parents, a state legislator, and members of both teams—to join him at the 50-yard line after a game in October 2015. After that, the school district placed Kennedy on paid administrative leave.

During a performance review, the head football coach said Kennedy shouldn’t be rehired because he violated the school district’s policy. Kennedy did not seek to be rehired for the coaching position and instead filed his lawsuit in federal District Court.

The Supreme Court decision in this case, Kennedy v. Bremerton School District, is expected in June.