Want to save the liberal arts? Learn a few things from the business world. 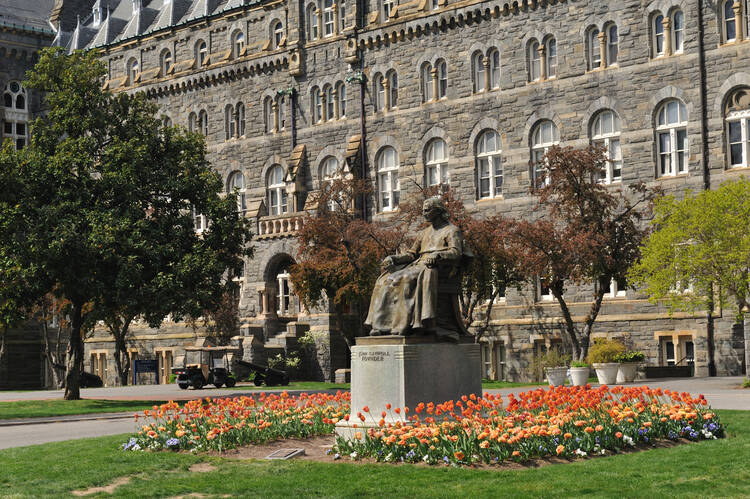 Georgetown University’s description of its philosophy program promises to equip students "with important skills for living with themselves from day to day.” (Photo of John Carroll statue in front of Healy Hall from iStock/aimintang)

Liberal arts universities face serious challenges. Jesuit institutions, among others, have seen the impact of a declining college-age population and student preferences for business degrees and the study of science, technology, engineering and math (STEM) to the exclusion of the liberal arts. But colleges can raise the visibility and appeal of their liberal arts curricula by using a few best practices from the business world to better connect with prospective students and the larger world beyond the campus.

Learning from the business world does not mean abandoning an institution’s Jesuit charism or other distinguishing culture. Nor does it mean a wholesale surrender to the “telos of job training,” as Charles C. Camosy recently put it in his survey of the challenges facing Catholic universities. Much can be done to boost enrollment in liberal arts courses and majors while preserving the academic integrity essential to the liberal arts.

[Related: How to save the liberal arts as if society depends on it (because it does)]

To take one example, benchmarking, or comparing one’s product to that of a successful competitor, is not inherently mercenary, and it does not have to lead to drastic cost-cutting at liberal arts departments. Candid assessment against the best liberal arts colleges in the country—and not just against those in a niche category like “top regional college with an urban campus”—can reveal ways for a school to boost enrollment and revenue.

One area for comparison is the course catalog language that describes the product. Does the course description appeal to the student-customer’s interest? For example, Williams College is a well-respected secular liberal arts college in Massachusetts. Its Department of Philosophy describes each course in clear language (“Freedom is widely held as one of our fundamental values. But how often do we ask: What is freedom? and Why do we value it?”) that invites curiosity and enrollment. Similarly, Georgetown University’s description of its undergraduate philosophy program and objectives (“Our goal is to equip majors and minors not just with skills for a trade or profession, but with important skills for living with themselves from day to day”) provides an excellent introduction. And the University of Colorado uses a short, well-made video inviting the prospective student to a new area of study by appealing to their interests and passions.

Comparing one’s product to that of a successful competitor is not inherently mercenary, and it does not have to lead to drastic cost-cutting at liberal arts departments.

Contrast these with the catalog pages at other colleges with dull language about entry-level courses. One example: “Introduction to Western Philosophy introduces the main methods and aims of Western Philosophy, involving the study of problems central to metaphysics, theory of knowledge, and ethics.” How many teens will find that engaging, or even comprehensible? Where is the articulation of value (in business terms, the “value proposition”) for the teenage student-customer? Similarly, using the language of philosophy itself to introduce philosophy to someone unfamiliar with the discipline builds a wall, rather than opening a door.

Well-designed courses taught by great professors deserve a fine introduction, and that begins in the course catalog, where high school students make their first decisions about colleges and courses. A customer-oriented course description can present a course in philosophy or world religions as a step on the pathway from a student’s present life to the noble and purposeful life he or she dreams of living.

Using the language of philosophy itself to introduce philosophy to someone unfamiliar with the discipline builds a wall, rather than opening a door.

In addition to better course descriptions, liberal arts colleges should consider new names for degrees and majors. For managers hiring recent college graduates, the name of the degree is the first clue to an applicant’s depth and breadth and a starting point for interview conversation. A prospective employer looking for social awareness, critical thinking, communication skills and leadership potential might consider the possessor of an undergraduate degree in Peace, War and Defense, as offered at University of North Carolina–Chapel Hill, who has spent four years researching some of mankind’s most complex and impactful decisions. But many universities that require a battery of liberal arts courses still confer the generic Business Administration major. Why not communicate the advantage of a comprehensive liberal education to prospective employers by renaming that degree to, say, Business in a Dynamic Global Environment,” to indicate a person who is technically competent but also culturally aware?

[Related: Will Catholic universities survive the upheaval in higher education? The next 10 years will tell.]

Universities that simply abandon the liberal arts are late responders to old news. In 1967, the economist John Kenneth Galbraith in his book The New Industrial State was already deriding business and engineering colleges that neglected the liberal arts as soulless “preparatory academies of the technostructure.” But Galbraith’s lament was not widely shared: Three years later, Milton Friedman’s influential essay in The New York Times Magazine extolled profits as the social responsibility of a business.

Today companies are changing in ways that speak to a rising interest in business as a forum for human interaction, where people come together for mutual benefit. The Business Roundtable, composed of chief executives of major corporations, revised its Statement on the Purpose of a Corporation in 2019, urging consideration of the interests of employees, suppliers and communities in addition to shareholder profits. Some of the nation’s largest companies have been raising their minimum pay scales and announcing new carbon-reduction initiatives, while the #MeToo and Black Lives Matter movements directed attention to gender and racial equity. The natural result of this is greater appreciation for the skills developed through liberal arts studies. Hiring preferences will change to build the new culture needed to achieve the broader mission of the business. That gives colleges the opportunity, and the need, to communicate the value of the liberal arts to the world beyond the campus.

Liberal arts colleges and departments that demonstrate their connection to the student’s quest for personal growth and the community’s drive for social progress have greater opportunity now than any time in the past half-century. In particular, Jesuit institutions must look at how other universities are describing their own offerings, and need to be as good as—or better than—the best. Carpe diem.