Partisanship is becoming a religion unto itself. How do Catholics respond in the voting booth? 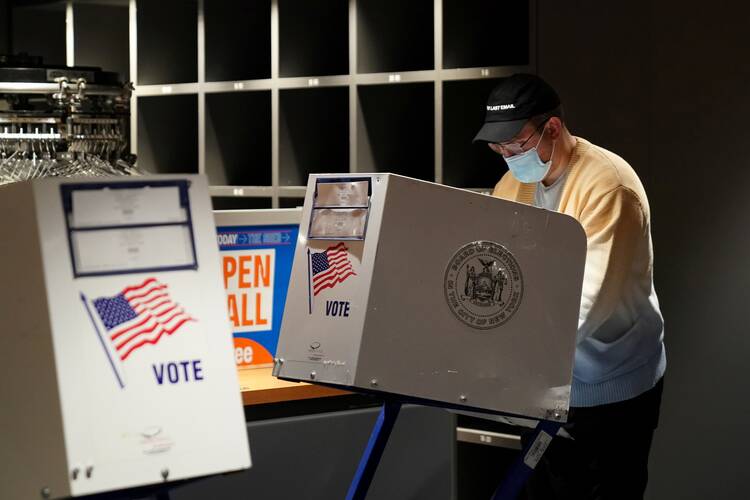 A voter in New York City fills out a ballot at Hudson Yards during early voting on Oct. 24, 2021. (CNS photo/Bryan R Smith, Reuters)

In the struggle between faith and party politics, says Geoffrey Layman, chair of the Department of Political Science at the University of Notre Dame, “American two-party politics is winning. In some ways, partisanship becomes a religion unto itself.”

That is one of the insights gleaned from a new report released by Notre Dame researchers exploring a surprisingly complex aspect of Catholic life: how Catholics vote. The report focused on the unique pressures and behaviors of “seamless garment” Catholics in making electoral decisions.

Named for the seamless tunic that Jesus wore when he was crucified, the seamless garment approach urges a “consistent ethic of life” from birth to natural death, first promoted as a whole-life position by the late Cardinal Joseph Bernardin of Chicago. The Notre Dame report describes “seamless garment Catholics” (which it abbreviates as S.G.C.s) as those who support the church’s spectrum of sociopolitical beliefs—people both pro-life and pro social justice, opposing abortion and supporting strong social welfare, immigration rights and environmental protections.

Those positions cut across traditional lines of Democrat or Republican, liberal or conservative. This means that America’s two-party system leaves S.G.C.s in a bind, as neither party and neither ideology fully represents their beliefs. “It’s an uneasy fit between Catholicism and American party politics,” explains Mr. Layman, one of the report’s lead researchers. “There’s only two parties and each of those parties represents only a segment of Catholic church teachings.”

The report, titled “​​Coping with Cross-Pressures: The Seamless Garment in Catholic Political Behavior,” studies the prevalence and demographics of S.G.C.s, the political pressures they are subject to and how they cope with these pressures in voting.

Mr. Layman has spent a decade pondering the issue and two years researching it. He says the report asks: “How many Catholics truly face this dilemma? How many actually follow this seamless garment pattern of supporting all the positions of the church, and not just those that line up with one party or the other?”

The answer is not very many. The number of Catholics who report supporting the full range of the church’s political beliefs is small and decreasing. Fewer than 10 percent of U.S. Catholics qualified as S.G.C.s based on their self-reported beliefs in 2016, down from 18 percent in 1988. For Mr. Layman, this is one of the biggest surprises of the research: “Really, what we’re talking about are people who just follow the teachings of the church, and you would expect that to be a little larger group.”

Also surprising is that seamless garment beliefs are most prevalent among religiously committed, young, low-income and Latino Catholics. They are the most likely to be socially liberal on issues of environment, immigration and social welfare, according to the report, while still supporting church teaching on abortion.

Latino Catholics are the fastest growing segment in the church, but their increasing numbers will likely not be enough to offset the overall decline of seamless garment Catholics, Mr. Layman predicts. Some of this decline derives from the waning moral authority that the church holds for many believers. But much of it also has to do with an increasing pressure to adopt clear political affiliations.

Psychologists say it is cognitively easier to identify as either a Republican or a Democrat than it is to navigate the political no-man’s land of maintaining beliefs that defy party lines. Over time, S.G.C.s affiliate with a political party and adopt that party’s political stances, leaving seamless garment beliefs behind. This is one of several coping methods, according to the report, employed by S.G.C.s when faced with the dilemma of making voting choices among real-world political candidates.

The research describes S.G.C.s as being “cross-pressured” by their Catholic identity; that is, they are subject to unique and conflicting pressures in making electoral choices because the teachings of the church encourage both Republican and Democratic positions. To cope with these cross-pressures, many S.G.C.s may avoid voting altogether or vote for a third party candidate.

In the 2016 election, 22 percent of S.G.C.s reported not voting at all, a significantly larger percentage than the next-highest category of Catholic voters, moderates, of whom 16 percent did not vote. Seamless garment Catholics were also twice as likely as Catholic liberals or conservatives to vote for a third-party candidate.

But those seamless garment Catholics who do vote for a traditional party candidate engage in several psychological strategies to rationalize their choice. One such strategy is attitudinal persuasion, when individuals change their personal beliefs to match that of their preferred candidate or party, according to the report. Another is selective misperception, which is perceiving a candidate to be more liberal or conservative on an issue than they really are to feel better about voting for them.

A third, more conscious strategy is issue prioritization, in which an individual can decide which issue is the most important to them and vote along the lines of the party that best represents that one issue. For seamless garment Catholics, this generally means choosing to vote Republican for pro-life initiatives or to vote Democratic in support of social-welfare initiatives.

Interestingly, “issue prioritization” is also expressed at the parish level. The report cites studies that have found many priests have a set of issues that they emphasize in their homilies, which tend to focus on either pro-life or pro-social welfare issues, rather than present the full range of the church’s beliefs.

This leads to a question Mr. Layman is interested in exploring in the future: Are priests in primarily Latino parishes less prone to issue prioritization, leading to a higher concentration of seamless garment Catholics who are Latino?

In the meantime, the coming months will be an interesting time to observe the Catholic vote, Mr. Layman says. Despite the cross-pressures of voting as a seamless garment Catholic, the report found that S.G.C.s tend to identify with one party more than the other in voting: 48 percent identified with the Democratic Party, while only 13 percent identified as Republicans.

But the overall Catholic vote has been closely split for several decades. In the 2020 election, one survey showed that 50 percent of Catholic voters went for Donald Trump, while 49 percent supported Joe Biden. With upcoming elections in the House and Senate, Mr. Layman hopes that seamless garment Catholics can be a moderating influence in political discourse, with their aisle-crossing views helping encourage polite dialogue between parties.