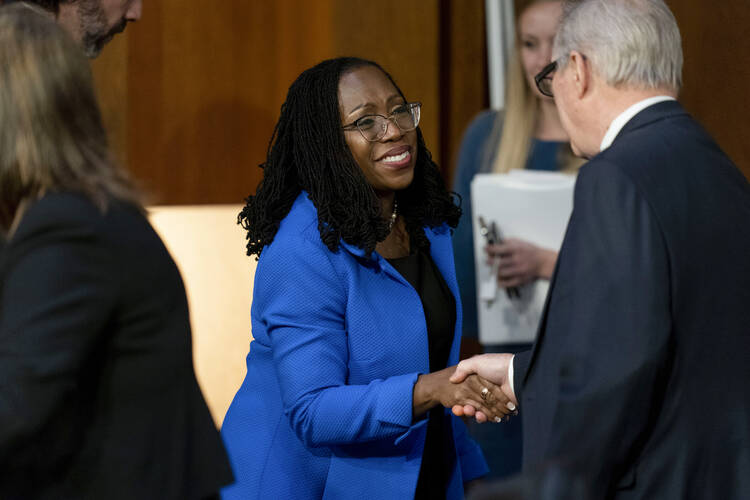 WASHINGTON (CNS) — The confirmation hearings for Supreme Court nominee Judge Ketanji Brown Jackson began with introductory remarks March 21 followed by 13 hours of questioning the next day about her role as a judge and a public defender and her views on abortion, critical race theory and her own faith.

Questions continued March 23, to be followed by remarks from witnesses the next day.

Judge Jackson, a judge on the U.S. Circuit Court of Appeals for the District of Columbia Circuit, also was asked by Republican senators about her defense of Guantanamo Bay detainees and sentences she gave in child pornography cases.

The 51-year-old nominee was joined by family members in the hearing room, including her husband, their two daughters, and her parents and other family members and friends.

In her opening statement, she said that as a federal judge she has always taken seriously her responsibility to be independent.

Judge Jackson, as other nominees before her have done, agreed that the court’s decision in the Roe v. Wade case was a binding precedent.

“I decide cases from a neutral posture,” she told members of the Senate Judiciary Committee on the second day of hearings when the senators were each allotted 30 minutes of questioning. “I evaluate the facts, and I interpret and apply the law to the facts of the case before me, without fear or favor, consistent with my judicial oath.”

Judge Jackson said it was “extremely humbling” to be considered for Justice Stephen Breyer’s seat on the court and added that she “could never fill his shoes,” but if she were confirmed, she hoped she would “carry on his spirit.”

On the first day of the nomination hearings, crowds of supporters gathered outside the Supreme Court pleased that, if confirmed, Judge Jackson would be the first Black woman to be a Supreme Court justice. A group of pro-life demonstrators also gathered to protest President Joe Biden’s nominee, stressing that she would support keeping abortion legal.

Judge Jackson was asked a few times March 22 about her abortion views. Senator Dianne Feinstein of California asked Judge Jackson, as she has asked the last three court nominees, if Roe v. Wade, the court’s 1973 decision legalizing abortion nationwide, was settled law. Judge Jackson, as other nominees before her have done, agreed that the court’s decision was a binding precedent.

Later when she was asked by Senator John Kennedy of Louisiana if she has a personal belief on when life begins, she said she did.

“I have a religious belief that I set aside when I am ruling on cases,” she told the committee.

At the end of the March 22 questioning, Senator Marsha Blackburn of Tennessee asked if Judge Jackson would respect the Supreme Court’s decision if it overturned Roe v. Wade later this year in the Mississippi abortion case. Judge Jackson said she would treat it as she “would any other precedent.”

Earlier that day, Senator Lindsey Graham of South Carolina asked Judge Jackson about her faith, and she responded that she is “Protestant, nondenominational.” When pressed further about how important her faith is to her she said that it was very important but added: “There is no religious test in the Constitution under Article 6.”

She also said it’s very important to “set aside one’s personal views about things” in the role of a judge.

When Lindsey Graham asked Judge Jackson, “On a scale of one to 10, how faithful would you say you are in terms of religion?,” the judge said she was reluctant to talk about her faith in this way.

Mr. Graham, who kept on this topic, asked: “On a scale of one to 10, how faithful would you say you are in terms of religion?”

The judge said she was reluctant to talk about her faith in this way because she wants the public to know she has the ability to separate out her views.

Mr. Graham said he had no doubt about that and then went into how poorly Justice Amy Coney Barrett had been treated in her questioning referring to Barrett’s federal judiciary nomination hearing in 2017 where Ms. Feinstein said to her: “The dogma lives loudly within you, and that’s a concern.”

When Judge Jackson was asked by Senator Ted Cruz of Texas about her potential support for critical race theory, an academic theory about how racism is spread in society, the nominee said the theory doesn’t “come up in my work as a judge, which I’m respectfully here to address.”

She later told Senator Christopher Coons of Delaware that she has never used critical race theory in judging a case.

Amid the intensity of the two days of questioning, Judge Jackson calmly answered the senators’ questions, although not always to their liking. She did not, for instance, describe her own judicial philosophy but instead spelled out methods she used in judging: reading briefs, listening to both sides, examining precedents and then making a decision.

During the final day of questioning, Senator Dick Durbin of Illinois, the chairman of the Judiciary Committee, accused some of his Republican colleagues of being “just vicious in their attacks.”

He told Judge Jackson that her “patience, dignity and grace in the face of what was, frankly, some offensive treatment is a real testament to your judicial temperament.”

“You faced insults here that were shocking to me,” said Senator Cory Booker of New Jersey, but he added that she earned the spot where she now sits. “You are worthy. You are a great American.”

Senator Cory Booker of New Jersey, used his time in the last day of the questioning to give an impassioned speech expressing the significance of Judge Jackson’s nomination to the nation’s high court.

“You faced insults here that were shocking to me,” he said, but he added that she earned the spot where she now sits. “You are worthy. You are a great American.”

In the second round of questioning March 23, members of the Senate Judiciary Committee were allotted 20 minutes each for questioning. Judge Jackson will not appear March 24 when senators will hear from the American Bar Association—which assesses judicial nominees’ qualifications—and outside witnesses.

The committee then determines if it will pass Judge Jackson’s nomination to the full Senate for a vote. It takes a simple majority of the Senate—51 votes—to confirm a nominee. Democrats now have 50 seats and Vice President Kamala Harris could cast a tie-breaking vote.

The senators have said they hope to finish the confirmation process before they break for Easter recess April 11.