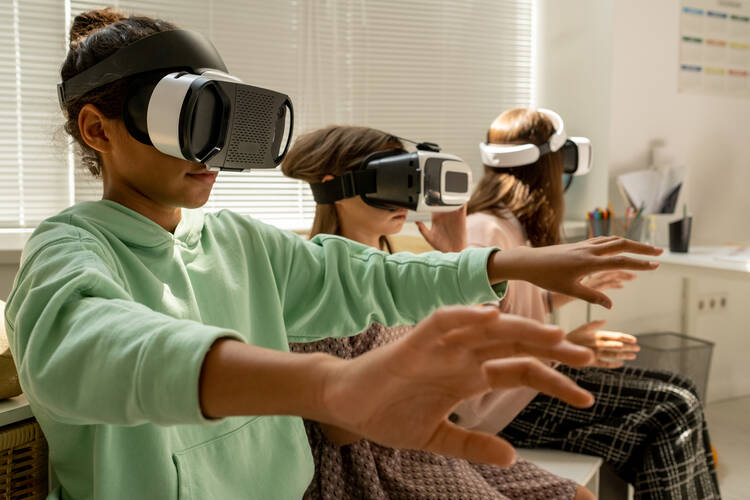 The search for a magic solution to human pain and longing is one of the oldest stories ever told. Read about the Sirens seducing Odysseus, or Jesus facing temptation in the desert.

So the tale spun by Meta, the company formerly known as Facebook, in a Super Bowl ad to 112 million viewers, felt like a familiar tale of temptation.

In the commercial for its virtual reality headset Meta Quest 2, an animatronic hound dog is the lead singer in a band, happily playing Simple Minds’ “Don’t You Forget About Me” in a diner called Questy’s with an octopus on the drums and penguins on keyboard and guitar. The night ends. Questy’s hangs out a sign announcing it is “Closing Forever!”

The metaverse turns out to be a heaven where nobody is forgotten and everybody is their best self.

The setting suggests a rusting city in a pandemic. Our hound dog hero has fallen out of the American dream into a post-industrial dystopia. He is hanging out in a pawn shop, then he’s a figurine at Disney World, before ending up on the back of a truck. He is about to get crushed in a junkyard when a woman grabs him and turns him into a greeter in a futuristic convention center where the Meta Quest 2 headset is being displayed.

A headset is strapped on. The hound dog enters the metaverse, where his avatar is reunited with his bandmates at a virtual Questy’s. Everything is great again, and he has found the solution to his painful loneliness. The metaverse turns out to be a heaven where nobody is forgotten and everybody is their best self.

On one level, the ad is simply pitching us a fun product. But keep in mind that Mark Zuckerberg’s firm, which controls Facebook, Instagram and WhatsApp, appears to be in trouble, amid allegations that it has permitted hate speech, peddled sexual images to teens and violated users’ privacy. The company has promised reform, but its core business has suffered. In the last quarter of 2021, the number of worldwide daily users on Facebook stopped its steady rise and slightly fell, to 1.929 billion from 1.930 billion.

Mr. Zuckerberg, who paid $2 billion for headset maker Oculus in 2014 and has been buying other virtual reality companies, is betting that the metaverse can flip the script.

To be sure, the gaming industry has been enthusiastic about adopting the technology, and sales of virtual reality headsets were up 70 percent last year. Virtual reality has gained a foothold in many households, even if the headsets make some people dizzy and has been a cause of injuries for others.

It is this ambition to make headsets and the metaverse a place for what we generally call real life that raises metaphysical questions.

But as the Super Bowl ad illustrates, Mr. Zuckerberg hopes virtual reality will be more than a game. “Think about how many physical things you have today that could just be holograms in the future,” he wrote in a public statement introducing the concept. “In this future, you will be able to teleport instantly as a hologram to be at the office without a commute, at a concert with friends or in your parents’ living room to catch up.”

He has some convincing to do. “The socializing things you do are kind of a joke for kids,” Andy Marous, an 18-year-old in Pittsburgh who enjoys playing virtual reality games, told me.

But in Meta’s virtual reality space Horizon Worlds, people can use their avatars to interact, shop and consume entertainment. And as the Super Bowl story of the dog illustrates, they can go back to something resembling the past. “One of the behaviors that we saw in Horizon Worlds, which is our new social sandbox, is that we saw people building the places from their past,” Dave Kaufman, a marketing director for Meta, said to the magazine Ad Age.

It is this ambition to make headsets and the metaverse a place for what we generally call real life that raises metaphysical questions.

“Trying to substitute the second place thing for the real thing has a sadness to it.”

As Mr. Kaufman observed, human behavior in virtual reality can point to deeper, more spiritual needs. Who doesn’t want to revisit a happy chapter of the past? But in the spiritual life, some longings are best left unfulfilled. In the recent TV series “Dopesick,” which chronicles the opioid epidemic, Michael Keaton plays a doctor who succumbs to opioid addiction. At the end of the series he delivers a moving speech on pain: “There’s some kind of pain in a lot of us, all of us, that we just don’t want to feel anymore.”

When I called Brian Green, the director of technology ethics at the Markkula Center for Applied Ethics at Santa Clara University, he said the Meta Quest ad also made him think of opiates. “That commercial is saying: ‘You don’t want to live in reality,” he told me. "And that’s what opiates help you avoid."

And maybe, Mr. Green suggested, virtual reality as a means of human interaction in the way that Mr. Zuckerberg advocates should be treated like a drug. “You’re supposed to use morphine when you’re in horrible pain,” he said. “I could envision a therapeutic use for VR for people who are in depression, or are in nursing homes, a therapeutic when nothing else is working.”

During the pandemic, for example, when older Americans were stuck in nursing homes, virtual reality headsets could have served a useful purpose.

But, I pointed out, the pandemic also highlighted the richness of real human interaction. Think about that reunion where you hugged your parents or siblings after a year of communicating only on Zoom or by phone.

Indeed, said Mr. Green: “Trying to substitute the second place thing for the real thing has a sadness to it.”

As Pope Francis writes in “Fratelli Tutti,” describing where the world was headed even before the pandemic, “We looked for quick and safe results, only to find ourselves overwhelmed by impatience and anxiety. Prisoners of a virtual reality, we lost the taste and flavor of the truly real” (No. 33).

In real life, the flavor is sweet when you rock, and sour when the party’s over. Anything else is just a game.