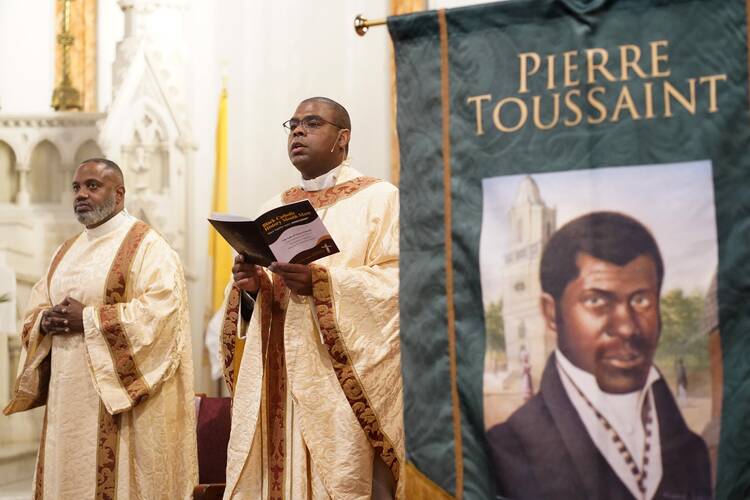 Father Alonzo Cox is assisted by Deacon Rachid Murad, left, as he celebrates a Mass marking Black Catholic History Month in Brooklyn, N.Y. Pierre Toussaint, seen on a banner at the altar, is one of six African American Catholics who are candidates for sainthood. (CNS photo/Gregory A. Shemitz)

(RNS) — Frustrated with a church that didn’t reflect his identity, Ralph Moore went into St. Pius Church in West Baltimore late one night with his friends and painted the statues of Jesus and Mary black—a “parting shot” before he left Catholicism.

He recalled a Stations of the Cross depiction—painting Jesus Black but leaving white the Roman soldiers abusing him, tugging at his clothes. To Moore, this was a statement on Black liberation.

“We were trying to make the church relevant,” said Moore, who remembers sitting in church wondering, “Why are all the images here white?”

This was 50 years ago. Moore has since returned to the church and is now part of a lay Catholic effort that’s pushing Pope Francis to canonize six African American candidates into sainthood. It’s fitting, Moore said, to commemorate this anniversary by continuing “to teach the institution who God is, because white supremacy practices don’t come from God, they come from men.”

Out of the more than 10,000 men and women recognized as saints, which includes 11 Americans and a total of 899 that have been canonized by Francis, none are African Americans.

Moore is a member of the social justice committee at St. Ann’s Church in East Baltimore that for the past two months has been collecting several hundred signatures on a letter they drafted and addressed to Francis, highlighting how embarrassing it is “that in the church where we worship, there are no United States African American saints recognized by the highest church authorities.”

Out of the more than 10,000 men and women recognized as saints, which includes 11 Americans and a total of 899 that have been canonized by Francis, none are African Americans.

“They don’t see us. We’re like hidden members and they need to learn how to see us,” Moore said.

On Tuesday (Dec. 14), they mailed their first batch of more than 1,000 letters to the Vatican. The effort, which began in November, is ongoing. The movement is organized by parishioners of St. Ann’s, St. Francis Xavier and St. Wenceslaus.

As the letter notes, the African American candidates for sainthood “were either born into enslavement or educated the enslaved at personal risks to themselves.”

“We’ve seen this as a real justice issue. We have discovered that unless you tell the people, they won’t know and they won’t change.”

They are: Pierre Toussaint, credited as the father of Catholic Charities in New York; Henriette DeLille, founder of a community of Creole nuns known as the Sisters of the Holy Family order; Augustus Tolton, the first known African American to serve as a Catholic priest in the U.S.; Julia Greeley, recognized as Denver’s “Angel of Charity” for her work with the poor; Mother Mary Lange, founder and first superior of the Oblate Sisters of Providence; and Thea Bowman, the only African American member of the Franciscan Sisters of Perpetual Adoration.

Delores Moore, another member of the committee, said there’s little awareness of the existence of six African Americans on the road to canonization.

“We’ve seen this as a real justice issue,” she said. “We have discovered that unless you tell the people, they won’t know and they won’t change.

“We realize we have to speak out. We’re going to be outcasts for a while until people catch up, and that’s O.K.,” added Moore, who is not related to Ralph Moore.

Advocates are also urging the pope to redefine the rigorous process the Catholic Church undergoes toward canonization. The process is “unfair” and reaps “uneven results,” they say.

But the advocates are doing more than calling for sainthood; they’re also urging the pope to redefine the rigorous process the Catholic Church undergoes toward canonization. The process is “unfair” and reaps “uneven results,” the advocates say.

As Dorian Llywelyn, president of the Institute for Advanced Catholic Studies, notes in The Conversation, the process, which examines the life and holiness of a candidate, can take years or even centuries.

It starts with a bishop opening an investigation into the life of a person, after their death, who’s carried a reputation for “exceptional holiness.” The person, at this stage, can be given the title “Servant of God,” Llywelyn writes, and further research is needed to reach the “Venerable” recognition, which is the next stage in canonization.

All six of the African American candidates have been deemed “Servants of God,” and Toussaint, Tolton and DeLille are Venerable.

All six of the African American candidates have been deemed “Servants of God,” and Toussaint, Tolton and DeLille are Venerable.

Next is beatification, “when someone is declared ‘Blessed,’” during which, as Llywelyn notes, the Vatican is usually required to confirm the person performed a “miracle” by interceding with God. Two miracles are required in order to be declared a saint.

But instead of focusing on miracles, Ralph Moore said the church should recognize the hardships African American Catholics have endured over the years—being expected to sit in the back of the church or receiving Communion only after white Catholics had done so.

“African Americans and brown people, particularly in this country, have endured enslavement, have endured segregation even within churches, have endured mass incarceration and mass poverty, and yet we have remained faithful,” Ralph Moore said.

Members of this effort say they have received nationwide support, including from white Americans and from people of other faiths. The movement was launched Nov. 1 with a Mass at St. Ann’s, where parishioners carried portraits of the six candidates for sainthood.

To Betty Lutz, a cradle Catholic who is white, “this deficit in church attention is so blatant that even white people get it.”

“This endeavor has taken on a life of its own when people are informed,” said Lutz, who is a member of the social justice committee.

Mary Sewell, also a member of the committee, said this movement “really opened my eyes.”

“Although I was raised a Catholic, I never thought of a white saint, black saint. I didn’t realize there were no (African American) saints, and once that presented to me, I saw the realization of it. I was proud to jump on this cause,” Sewell said.