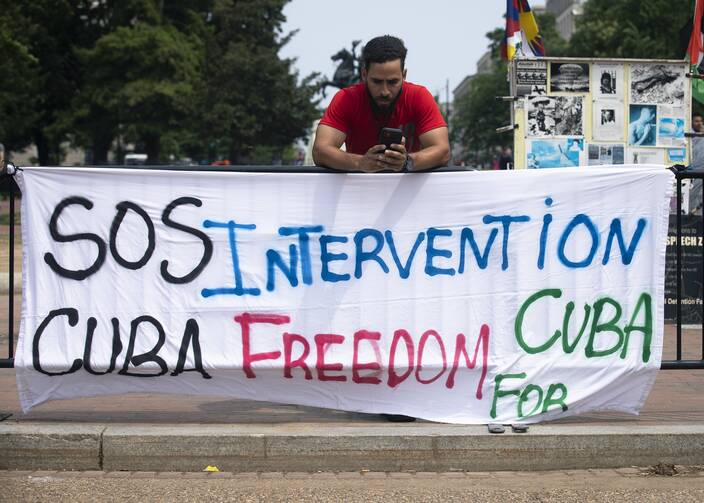 A protest near the White House in Washington in July called for freedom in Cuba and urged U.S. President Joe Biden to do more to pressure the Cuban regime. (CNS photo/Tyler Orsburn)

Cuban authorities appear to have been unmoved by a call from the island nation’s Catholic bishops for an opening to free political expression as protest organizers were prevented from leaving their homes on Nov. 15 for rallies and marches they planned. On Nov. 11 the bishops published a statement acknowledging heightened political tensions in Cuba and urging the release of prisoners detained since protests in July first startled Cuba’s Communist leaders with demands for free expression and political and economic reforms.

“Everyone deserves to have their dignity esteemed and recognized,” the bishops said. As human beings gifted with dignity and as children of God, they said, all are free citizens, “subject to rights and duties.

“Consequently, every Cuban should be able to freely and respectfully express and share his personal opinions, his thoughts or his convictions, even when he disagrees with the majority,” the bishops said, appealing to Cuba’s Communist leaders to reconsider the party’s resistance to public criticism and protest.

“We believe that there is an increasing need for the involvement of Cubans in a national effort that involves and motivates everyone; that takes into account differences, without exclusions or marginalization,” the bishops said.

“Every Cuban should be able to freely and respectfully express and share his personal opinions, his thoughts or his convictions, even when he disagrees with the majority,” bishops said.

“We think that it is necessary to implement mechanisms where, without fear of intimidation and reprisals, everyone can be heard and dissatisfaction with the harsh daily realities that burden so many, especially the most impoverished and vulnerable, is channeled.”

They added, “It is imperative to implement the necessary changes, so greatly desired, that support a dignified and happy life for all [God’s] children here on this earth.”

But activists who planned to host protests on Nov. 15, the day Cuban officials ended a 20-month Covid-19 lockdown and reopened Cuba to international visitors, say they were blockaded in their own homes by government supporters and unable to attend the “Civic March for Change” they intended to lead. Others told The Associated Press that they were warned by Cuban police that they would be arrested if they took to the streets.

The activists had applied for permits to conduct the protests in Havana and other cities. They were denied that permission, and the applications apparently allowed Cuban officials to target individual activists who were hoping to lead the protest marches. The release of activists and everyday Cubans arrested over the summer was the primary demand protestors say they hoped to express.

Government critics, who include writers, artists and the prominent Cuban playwright Yunior García, hoped to revive a spontaneous popular resistance to Cuba’s one-party rule and economic malaise, a resistance that startled Communist officials in July when Cubans witnessed the largest demonstrations against the nation’s Communist administration in recent memory.

Hunger and unemployment have been escalating in Cuba because of the restrictions imposed by the pandemic and the long-term effects of the decades-long U.S. embargo. Government officials blame meddling by the U.S. government for the unrest in Cuba, but the civic march’s organizers say they have not been in contact with nor accepted money from U.S. actors. The demonstration was called by Mr. García and the group he represents, Archipelago, an online discussion forum with 35,000 members.

Mr. García hoped to make a solo protest walk on Nov. 13, but he was prevented from leaving his apartment building by supporters of the government, who surrounded it. Protests went on as planned in Cuban communities in the United States and Spain.

“Demonstrating is a civic right. Under the circumstances in which we are and with the tools we have, everyone has that right,” one organizer, filmmaker Raul Prado, told The A.P. by telephone.

Mr. Prado said many people were “suffering the consequences” of publicly expressing a willingness to demonstrate. He said authorities cut off their internet service, police in uniform or in civilian clothes were stationed at homes, and government supporters harrassed them.

Among those accosted by security forces and government supporters on Nov. 15 was Sister Nadieska Almeida, superior of the Daughters of Charity in Cuba.

Cuban religious superiors: “We denounce the reappearance in Cuba of humiliating ‘acts of repudiation’ and systematic harassment against people who express any critical views of the government.”

Leaving her residence in Havana with other sisters on Nov. 15, Sister Almeida was approached by a group of people in civilian clothes, one of whom identified herself as a representative of the Communist Party. They told her that she was “forbidden to go out today.” Sister Almeida had previously expressed her support for the Nov. 15 march on social media.

According to a report from the Board of Directors of the Conference of Catholic Religious in Cuba, “despite their threats, she insisted that she had the right to move about freely; finally, they allowed her to walk, but continued to follow her as a form of intimidation.”

In a statement released on Nov. 16, the religious superiors added: “We wish to publicly express our indignation at this and other abuses, along with our support for Sister Nadieska and for all people who were victims of different types of aggression on Monday. We firmly believe that hurting each other is not the way to build the future we all want, in which our homeland is the common home for all Cubans.”

The religious superiors said: “We denounce as a violation of human rights the reappearance in Cuba of humiliating ‘acts of repudiation’ and systematic harassment against people who express any critical views of the government.”

Cuba’s Catholic bishops and its religious superiors issued a similar appeal for an opening to greater political expression during last July’s protests. They argued that allowing all parties to speak free from intimidation by government supporters and fear of arrest would lead to better outcomes as Cuba attempts to navigate the political and economic challenges that confront it. These include, a Jesuit priest said at that time, the difficulties created by the continuing U.S. economic embargo and efforts to isolate Cuba.

The U.S. Conference of Catholic Bishops has urged successive U.S. administrations to lift travel restrictions and the embargo of Cuba, calling for economic, cultural and religious engagement.

The U.S. Conference of Catholic Bishops has urged successive U.S. administrations to lift travel restrictions and the embargo of Cuba, calling for economic, cultural and religious engagement. According to The New York Times, the Trump administration instead ramped up pressure on Cuba, restricted travel, cut off remittances from overseas family members that are a lifeline to many in Cuba and further locked Cuba out of the international financial system, “pummeling its foreign exchange inflows.”

Expectations that the Biden administration would loosen those restored restrictions have so far been disappointed. The White House may be moving slowly on Cuba in reaction to the government’s fierce response to the July demonstrations. Some 659 protesters and activists were arrested then and remain jailed. Commenting on the Cuban government’s response to the July protests, President Joseph Biden described Cuba as a “failed state” and communism as a failed system.

In a 2019 statement objecting to the Trump administration’s decision to reimpose travel restrictions that had been lifted by the previous administration, Archbishop Timothy P. Broglio, J.C.D., of the Archdiocese for the Military Services USA and chair of the U.S. bishops’ Committee on International Justice and Peace, wrote:

The Holy See and U.S.C.C.B. have long held that the key to Cuba’s transformation depends not on isolation, but on greater cultural exchange between freedom-loving people on the island and the United States. A half century of rigid isolation has consolidated only one thing: the very political structures U.S. Government policy seeks to change.

In their most recent statement, Cuba’s bishops insisted on a peaceful resolution to political tension through dialogue: “Once again,” they wrote, “we call on everyone to spare no effort to pave the way for understanding, reconciliation and peace; so that the various proposals on the present and future destiny of our country find a place of sanity, tolerance and harmony, and establish a harmonious and civilized dialogue in which the best solutions to the problems that concern us can be found.”

Updated on Nov. 17 with a statement from Concur, the Conference of Men and Women Religious of Cuba, and the conference’s expression of outrage at the treatment of Sister Nadieska Almeida, superior of the Daughters of Charity in Cuba.