Cuban religious superiors: We hear ‘God’s voice’ in the cries of protesters 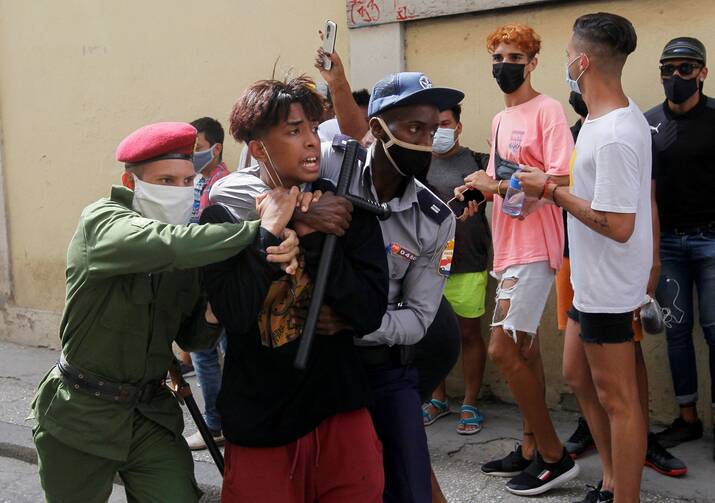 Police detain a person during protests in Havana July 11, 2021. Thousands of Cubans took to the streets to protest a lack of food and medicine as the country undergoes a grave economic crisis aggravated by the Covid-19 pandemic and U.S. sanctions. (CNS Photo/Reuters)

As local human rights groups report the detention of nearly 300 activists and protesters in Cuba, the Conference of Catholic Religious in Cuba issued a statement on July 13, urging the government to release citizens arrested since protests began on July 11. The board members of Cuba’s conference of religious superiors, recognizing “God’s voice in the people’s grievance,” also urged the government to allow Cubans to freely express their discontent and to cease using violence to repudiate and suppress “people who think differently and express their views in public.”

The conference’s statement proposed five points “essential for overcoming the difficult situation the country is going through and for building fraternity among all.” Conference members endorsed “the principle that all citizens have a legitimate and universal right to express their grievances in an orderly and peaceful way in public” and urged the immediate release of detained protesters.

The statement also “reclaimed the right” to communication and the free flow of information, objecting to the Cuban government’s efforts this week to shut down social media and block cellular traffic.

Cuba’s religious superiors: “All citizens have a legitimate and universal right to express their grievances in an orderly and peaceful way in public.”

In a televised address on July 14, Cuban President Miguel Díaz-Canel seemed to step back from his initial hard-line stance, for the first time offering self-criticism while acknowledging that government shortcomings played a role in this week’s protests, the biggest seen in Cuba in 25 years. He had on July 11 urged “revolutionaries,” “communists” and counter-protesters to the streets to “combat” demonstrators shouting for “libertad” and deploring shortages and hunger in Cuba.

“We have to gain experience from the disturbances,” he said on Wednesday night. “We also have to carry out a critical analysis of our problems in order to act and overcome, and avoid their repetition.”

Protesters have expressed anger over long lines and shortages of food and medicine, as well as repeated electricity outages. Some demanded a faster pace of vaccination against the coronavirus. But there were also calls for political change in a country governed by the Communist Party for some six decades.

Police moved in and arrested dozens of protesters, sometimes violently. The government has accused protesters of looting and vandalizing shops. Smaller protests continued on July 12, and officials reported at least one death. No incidents were reported on July 14.

In their statement Cuba’s religious superiors urged non-violence and dialogue to address the crisis. “We should all avoid the trap of using violence as a way to impose one’s own version of the truth,” they said. “We are worried that due to a lack of capacity for dialogue and listening, the government will attack, repudiate, persecute and condemn people who think differently and express their views in public.”

Speaking from Havana on July 15, Danny Roque, S.J., remained unconvinced that the president’s address succeeded in placating discontent. Father Roque said conditions today in Havana were calm, but he described a large police presence on city streets, especially near shopping areas and hotels.

“We have many problems in Cuba that we can solve here. We just need more freedom, especially economic rights for the people, so the people can be more protagonists of their lives.”

The government is trying to send the message that it is in control, he said. The president and the Cuban state have been trying to divert attention from the nation’s ongoing social and economic problems, he said, partly by blaming shortages on the U.S. embargo and other forces beyond their control. (The U.S. Conference of Catholic Bishops has urged successive U.S. administrations to lift travel restrictions and the embargo of Cuba, calling for economic, cultural and religious engagement.)

Father Roque agrees that the embargo contributes to the nation’s woes but suggested that shortages of food, medicine and services, as well as electricity blackouts, also result from structural faults. “We have many, many problems in Cuba that we can solve here,” he said. “We just need more freedom, especially economic rights for the people, so the people can be more protagonists of their lives, their economic situation. But the Cuban law doesn’t allow it.”

Cuba remains a “dependent and economically fragile nation” after the loss of former patrons like the Soviet Union and Venezuela because of its persisting commitment “to an economic system that, like the rest of the countries where it [has been implemented], has not managed to solve [elementary] problems nor guarantee a minimum of economic development.”

Father Roque described what has been happening in Cuba as a popular insurrection. “This happens when people are so tired, so frustrated and have reached such a limit that they prefer to take to the streets and pay the price that this implies rather than continue living the way they are.”

Though U.S. hostility remains a ready excuse for the current crisis, socialism in Cuba has only achieved an equality of misery, he charged. Father Roque added that even the much vaunted Cuban health system has proved inadequate to the coronavirus threat.

“Without any serious study to support it, the state proclaims the supposed success of two Cuban vaccine candidates,” he said. “However, the reality is that we see overcrowded hospitals, people treated on the floors, terrible hospital conditions and the lack of basic medicines.” All part of normalized, everyday life in Cuba, he said.

“This happens when people are so tired, so frustrated and have reached such a limit that they prefer to take to the streets and pay the price that this implies rather than continue living the way they are.”

Protests began on July 11 in San Antonio de los Baños, a small town south of the capital. Those demonstrations “generated a chain reaction,” Father Roque said, that eventually spread to some 30 other communities, including the capital of Havana. Father Roque described hearing shouts of “Freedom!” “Down with the dictatorship” and “Let him resign,” as thousands took to the streets to demand civil rights and humanitarian assistance. “Cuba has witnessed the largest citizen protests the country has experienced in the last 62 years,” he said.

President Díaz-Canel on July 11 urged government supporters to respond violently to the ongoing protests, according to a report from Human Rights Watch. “We call on all revolutionaries to go to the streets to defend the revolution,” the president said. “The order to fight has been given.”

According to H.R.W., local sources report that 275 people have been detained by government security operatives, and the whereabouts of many remain unknown.

Police and intelligence officers, H.R.W. reports, have also appeared at the homes of journalists and activists, ordering them to stay away from the streets. Other sources report the detention, death and injury of other protesters and activists since widespread demonstrations began.

In its statement, the conference of Cuban religious superiors urged dialogue and listening “to find solutions for the root causes behind these protests.”

The statement from the Catholic religious superiors of Cuba amplifies the message released on July 12 from Cuba’s bishops, who likewise called on the government to respect the right of the Cuban people “to express their needs, aspirations and hopes and, in turn, to publicly express how some [government] measures that have been taken are seriously affecting them.”

MESSAGE FROM THE CONFERENCE OF CATHOLIC RELIGIOUS IN CUBA

To the Members of Consecrated Religious Communities who live in Cuba

To all people of good will

We, who are responsible for accompanying consecrated religious life in Cuba, welcome, with deep respect and interest, the cries and hopes manifested by the people who have gone out to protest on the streets throughout the country on Sunday, July 11. As consecrated religious, we experience these events from a perspective of faith, and we recognize God’s voice in the people’s grievances. The people who came out into the streets are not delinquents; they are everyday Cuban people who found a way to express their discontent.

In communion with the important and inspiring message of our bishops that was published yesterday, July 12, we also feel that “we cannot close our eyes or look the other way, as if nothing were happening.”

As sisters and brothers who walk with the Cuban people, we wish to propose these five points which we see as essential for overcoming the difficult situation the country is going through and for building fraternity among all:

1. Let us remember and defend the principle that all citizens have a legitimate and universal right to express their grievances in an orderly and peaceful way in public; public space is not the monopoly or privilege of any particular ideological group.

2. All of the people who have been unjustly arrested for simply exercising their right to protest should be released immediately.

3. We reclaim the right to information and communication which has been extremely violated by the cutting of cellular connections and the blocking of social media. This increases the uncertainty and consternation of a people that already feels overwhelmed by dire economic, health, and social situations.

4. We should all avoid the trap of using violence as a way to impose one’s own version of the truth. We are worried that due to a lack of capacity for dialogue and listening, the government will attack, repudiate, persecute and condemn people who think differently and express their views in public.

5. It is important for all of us to listen to each other in order to find solutions for the root causes behind these protests. Only by going to the root of the problems will we be able to truly heal them.

We entrust ourselves to Our Lady of Charity; may she help us to overcome all temptations of violence and exclusion, and guide us in the ways of fraternity, reconciliation, justice and peace.