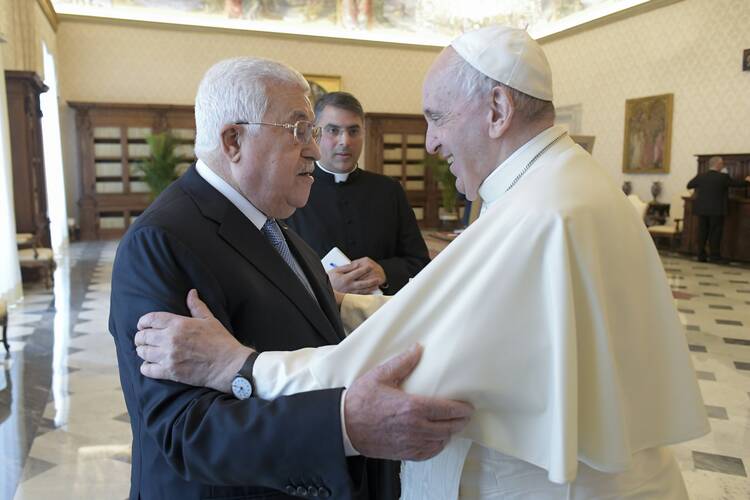 After Pope Francis and his senior advisors had separate meetings with Palestinian President Mahmoud Abbas on the morning of Nov. 4, the Vatican issued a statement insisting that it is “absolutely necessary to reactivate direct dialogue” between Israelis and Palestinians “to achieve a two-state solution.”

The Vatican called on the international community to make a “more vigorous effort” to assist this dialogue between the two peoples.

The Vatican also insisted on the need to ensure that the status of Jerusalem be recognized as “a Holy City for all three Abrahamic religions” and that this be guaranteed “through a special internationally guaranteed status.”

The Vatican issued a statement insisting that it is “absolutely necessary to reactivate direct dialogue” between Israelis and Palestinians “to achieve a two-state solution.”

It was Pope Francis’ sixth private meeting in the Vatican with the Palestinian leader. The two men know each other well, and from past meetings it is evident that they have a good relationship. They first met in 2013 and met again at the Vatican when the Palestinian president joined Israeli President Shimon Peres and Patriarch Bartholomew of Constantinople in the Vatican gardens for a prayer for peace in the Holy Land on June 5, 2014. They also had private audiences in 2015, 2017 and 2018. The pope and Mr. Abbas had another meeting in Bethlehem when Francis visited the Holy Land in May 2014.

In 2015, the Vatican officially recognized the state of Palestine.

Today, Francis and Mr. Abbas spoke with the aid of an interpreter for 50 minutes in the pope’s private library in the Vatican’s apostolic palace. The length of the audience indicates perhaps that they entered in depth into the present state of the 73-year-long Israeli-Palestinian conflict, which a former Vatican foreign minister, Cardinal Giovanni Lajolo, once described as “the mother of all conflicts” in the Middle East.

After their private conversation, Mr. Abbas presented his delegation to the pope, and then the two leaders exchanged gifts.

The Vatican also insisted on the need to ensure that the status of Jerusalem be recognized as “a Holy City for all three Abrahamic religions.”

Francis gave Mr. Abbas a bronze relief plaque depicting two hands holding each other, with the colonnades of St. Peter’s Square in the background, as well as showing a woman with a child and a boat of migrants. The plaque had the Italian inscription, “Let’s fill the hands with other hands.” The pope also gave Mr. Abbas several key documents of his pontificate: the message for the World Day of Peace 2021; the Document on Human Fraternity, which he signed with the Grand Imam of Al Azhar in Abu Dhabi in 2019; and the book Statio Orbis, which documents his prayer and talk in St. Peter’s Square on March 27, 2020, at the height of the Covid-19 pandemic in Italy.

After his meeting with the pope, the Palestinian leader went to the Secretariat of State for conversations with the two of the pope’s top advisors, Secretary of State Cardinal Pietro Parolin, and the secretary for relations with states, Archbishop Paul Gallagher.

After Mr. Abbas departed, the Vatican issued an unusually long statement that provided considerable information regarding the issues discussed.

Pope Francis and Mr. Abbas acknowledged “the good relations between the Holy See and the State of Palestine” and discussed “bilateral issues of mutual interest.”

“During the cordial talks in the Secretariat of State,” the statement read, the two sides acknowledged “the good relations between the Holy See and the State of Palestine” and discussed “bilateral issues of mutual interest.

“With regard to the peace process between Israelis and Palestinians,” the statement continued, “it was stressed that it is absolutely necessary to reactivate direct dialogue in order to achieve a two-state solution, also with the help of more vigorous effort on the part of the international community.”

In addition, the statement said that during Mr. Abbas’s conversations at the Vatican, both sides acknowledged “the need to promote human brotherhood and peaceful coexistence among the various faiths.” This is a key issue given the tensions and conflict that have erupted between Palestinians and Israelis in Jerusalem, which sparked the conflict in Gaza between Hamas and the Israelis in May 2021.

In their discussions, “it was reiterated that Jerusalem must be recognized by all as a place of encounter and not of conflict, and that its status must preserve its identity and universal value as a Holy City for all three Abrahamic religions, also through a special internationally guaranteed status,” according to the Vatican’s statement. This has been a long-standing position of the Vatican, and the tensions and conflicts of recent years around Jerusalem have underlined the need to guarantee this status.

Conscious that conflict could break out at any time, the final part of the Vatican statement said that during Mr. Abbas’s conversations in the Vatican, “attention turned to the urgency of working for peace, avoiding the use of weapons, and combating all forms of extremism and fundamentalism.”