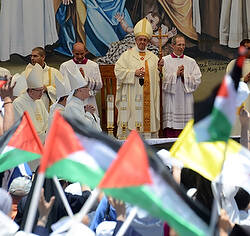 JERUSALEM -- At a time when the United States seems to have abandoned any hope of brokering a peace accord between Israelis and Palestinians under the present Administration, and the rest of the world watched on helplessly, Pope Francis, on Sunday May 25, stepped forward with a daring new approach – “the politics of prayer” -in an attempt to re-open the path to peace between those two peoples.

He took the world totally by surprise on Sunday by publicly announcing at the end of mass in Manger Square, Bethlehem, that he wished to invite Palestinian President, Mahmoud Abbas, and Israel’s President, Shimon Peres, to join him, at his guesthouse home in the Vatican, “in heartfelt prayer to God for the gift of peace”.

In his announcement, made from the birthplace of the Prince of Peace, he said, “All of us want peace.  Many people build it day by day through small gestures and acts; many of them are suffering, yet patiently persevere in their efforts to be peacemakers.”

“All of us – especially those placed at the service of their respective peoples – have the duty to become instruments and artisans of peace, especially by our prayers ,” he added.

“Building peace is difficult, but living without peace is a constant torment.  The men and women of these lands, and of the entire world, all of them, ask us to bring before God their fervent hopes for peace,” he stated.

Hours later both Presidents confirmed their acceptance of his invitation, and it now seems that the three leaders will meet in the Vatican in the first week of June.  Much of this is known from the wires, but it is necessary to understand the background to the initiative a little better, and how the Pope sees it, as well as the risk he is taking.

From the very first day of his three-day whirlwind “pilgrimage of prayer” in the Holy Land he put the peace question at center-stage. He spoke about peace many times in his first three talks. From that fact, and from private conversations with various people accompanying him, including his Rabbi and Muslim friends from Buenos Aires and the Israel journalist (my May 24 story), it became abundantly clear that Pope Francis was not simply coming for the important ecumenical celebration with the ecumenical Patriarch, Bartholomew I, in the Holy Sepulcher on May 25, he also had another top priority in mind: to take a risk for peace in the Holy Land.  He wants to create a climate in which serious peace negotiations could begin, so as to end what a former Vatican Secretary of Relations with States, Archbishop (now) Cardinal Giovanni Lajolo, once called, “the mother of all conflicts.”

Those who know Francis well are fully aware that this Pope from Argentina empathizes deeply with both Israelis and Palestinians. He greatly respects each of them, and sincerely desires to find ways to help them exit from the endless cycle of killing, hatred, brutality, resentment, mistrust, and all the other negative things to which their lives have become hostage to in the past 66 years. He wants to open the roads to peace for them.

His is a profoundly spiritual motivation, not a political one.  Pope Francis takes the Sermon on the Mount very seriously; it is the lodestar for his own life as a Christian.  Furthermore, he is truly a man of prayer, and firmly believes in the power of prayer. He believes that “prayer can move mountains.”  Thus, when faced with the likelihood that the USA would bomb Syria last year, bringing further death and destruction to an already martyred people,  Francis suddenly called a day of “prayer and fast” for peace in Syria, and a halt to all violence there. The results are known to all.

It should come as no surprise then that he should resort to prayer in an effort “to untie the knots” of the seemingly intractable Israeli-Palestinian conflict.  Cardinal Pietro Parolin, his Secretary of State, said as much when he spoke to some of us journalists at the end of the ecumenical ceremony in the Holy Sepulcher on Sunday evening.  He insisted that the Pope is not a political leader, he is a spiritual leader, and “it is only natural” that he should have resort to prayer to resolve the difficulties. “One might call it the politics of prayer,” Parolin said.

The first Jesuit Pope is a very original person in terms of initiative taking and finding solutions. He has the great ability to think outside the box, and he is a man of courage.  He is not reckless, but is willing to take risks for a good cause in which he believes.  He explores in great detail the problems he has to deal with, and has a talent for finding persons who can deliver in a given area.  All these factors played a role in his decision to invite the Palestinian and Israeli Presidents. Interestingly too he has concluded that both Abbas and Peres “are men of peace”; he stated this publicly in two speeches on May 25 and, during mass in Manger Square, he gave the kiss of peace to the Palestinian President, a Muslim, who was at that celebration

From the beginning of his pontificate, Francis has shown himself to be a man of action as much as a man of words.  Indeed wherever his action is self-explanatory, he avoids using words. This happened too on Sunday, when shortly before celebrating mass in Bethlehem, Pope Francis astounded the world and uplifted the Palestinians when, while driving from the Presidential Palace to Manger Square, he got out of his jeep right next to the infamous Wall that almost surrounds the city in which the Prince of Peace was born and is set to extend some 700 km along the West Bank, producing enormous resentment and hatred among Palestinians.

When he got out of his jeep, he walked to the infamous Wall and prayed there, close to it, for about 5 minutes, under the incredulous eyes of Israeli soldiers in the watchtower just above him.  As he finished praying, before heading back to the jeep, he put his forehead against the Wall that was covered in graffiti. His action was worth a thousand speeches.

Later that day, a young man who was born and grew up in a Palestinian refugee camp and who happened to be at that place when the Pope stopped to pray, told me, “his action has raised the spirits of all Palestinians, it made them feel that their independence will surely come.” The Pope’s prayer action (moral protest?) at the wall was worth a thousand speeches; the news was flashed on the newswires across the world.

Pope Francis is widely regarded as the leading moral authority in the world.  He is putting that moral authority on the line, however, with his ice-breaking invitation to the Palestinian and Israeli leaders, his warm kiss of peace at mass to the Palestinian Muslim President, and his intense prayer at the wall. But, as he explained in an interview, “I prefer a Church that goes out and has accidents rather than one that is closed in on itself and ill.”

He is well aware that he is taking a risk with his invitation to the Israeli and Palestinian presidents, a Jew and a Muslim to pray with him, a Christian, to pray for peace. He sought to play down the risks in a brief interview in Bethlehem with Nelson Castro, a well-known Argentinian radio and TV journalist, some hours after he made the announcement. “It’s an invitation. And it has been accepted, thanks be to God!,” he said.  He confided that he felt “very peaceful” after taking this initiative, and added: “We must fight and pray for peace, if not we will all end up destroying ourselves.”