Pope Francis calls for an end to clashes in Jerusalem 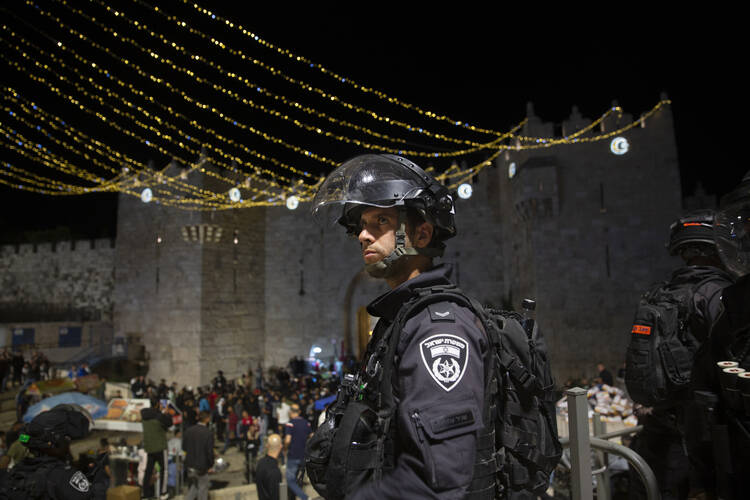 An Israeli police officer stands guard at the Damascus Gate to the Old City of Jerusalem after clashes at the Al-Aqsa Mosque compound, Friday, May 7, 2021. Palestinian worshippers clashed with Israeli police late Friday at the holy site sacred to Muslims and Jews, in an escalation of weeks of violence in Jerusalem that has reverberated across the region. (AP Photo/Maya Alleruzzo)

On Sunday, Pope Francis expressed “particular concern” at the clashes between Palestinians and Israeli police in Jerusalem and appealed for an end to the violence. He invited all parties to “seek shared solutions so that the multi-religious and multicultural identity of the Holy See is respected” and people can co-exist in Jerusalem in fraternity.

He expressed his concern publicly when, speaking from the study window of the papal apartment, he greeted pilgrims gathered in St. Peter’s Square on a warm and sunny Sunday, May 9.

Tensions have been rising over the threatened eviction of Palestinian families in East Jerusalem’s Shaikh Jarrah district, the BBC reported. It recalled that Israel has occupied East Jerusalem since the 1967 Middle East Six Day War and considers the entire city its capital, though this is not recognized by the vast majority of the international community, including the Holy See.

The BBC reports that the United Nations has said Israel should suspend any evictions and employ “maximum restraint in the use of force” against protestors. Moreover, it added that the League of Arab states has called on the international community to prevent any forced evictions.

Israel’s Supreme Court is expected to hold a hearing on the long-running legal case on May 10, according to the BBC.

On Monday, Hamas militants fired dozens of rockets into Israel, including a barrage that set off air raid sirens as far away as Jerusalem, after hundreds of Palestinians were hurt in clashes with Israeli police at a flashpoint religious site in the contested holy city.

The rocket fire drew heavy Israeli retaliation in the Gaza Strip. Health officials said at least 20 people, including nine children, were killed in fighting, making it one of the bloodiest days of battle between the bitter enemies in several years.

Pope Francis: “I pray that Jerusalem may be a place of encounter and not of violent clashes, a place of prayer and of peace.”

The fighting escalated already heightened tensions throughout the region following weeks of confrontations between Israeli police and Palestinian protesters in Jerusalem. Those confrontations, focused around a disputed hilltop compound in Jerusalem’s Old City, have threatened to spark a wider conflict.

Pope Francis, who as a young Jesuit was in Jerusalem in June 1967 during the Six Day War and returned there again when he visited the Holy Land in May 2014, told pilgrims on Sunday, “I am following with particular concern the events that are happening in Jerusalem.”

“I pray that it may be a place of encounter and not of violent clashes, a place of prayer and of peace,” he said. “I invite everyone to seek shared solutions so that the multi-religious and multi-cultural identity of the Holy City is respected and that fraternity may prevail.”

Pope Francis was referring to the fact that Jerusalem is a city that is sacred or holy to Jews, Christians and Muslims alike and the importance of allowing the followers of each faith to worship there freely and in peace, an aspect that he and the Holy See have frequently underlined. He concluded his message by saying, “Violence only generates violence. Stop [the clashes!]”

“I invite everyone to seek shared solutions so that the multi-religious and multi-cultural identity of the Holy City is respected and that fraternity may prevail.”

The BBC reported that the previous on May 8 clashes broke out at the Damascus Gate in Jerusalem after tens of thousands of Palestinian worshippers had prayed at the Al -Aqsa mosque for Laylat-al-Qadr, the most holy night in the Muslim month of Ramadan. CNN reported that more than 100 Palestinians were injured in the second night of clashes between Palestinian protestors and the Israeli police.

Protestors hurled stones at the police. According to the Red Crescent Society, protestors were hit with rubber bullets and stun grenades—some were hit in the head or hand—and 14 were taken to hospital.

CNN reported that 205 Palestinians had been injured in clashes on May 7 with the Israeli police in riot gear after evening prayer. It said another 22 were injured on May 5.

According to CNN, the U.S. State Department spokesperson, Ned Price, said, “The U.S. is extremely concerned about ongoing confrontations” and called upon Israeli and Palestinian officials “to deescalate tensions and bring a halt to the violence,” to exercise restraint and refrain from provocations to preserve “the historic status quo on the Haram-al-Sharif/Temple Mount, both in work and in practice.”

The BBC reported that the Quartet of Middle East negotiators—the United States, the European Union, Russia and the United Nations—expressed “deep concern” on May 8 over the spiraling violence in Jerusalem.

The pope also prayed for the victims of yesterday’s “inhuman” terrorist attack in Kabul, the capital of Afghanistan, which killed some 50 schoolchildren, mostly girls, as they were leaving their secondary school building. He invited everyone to pray for the young victims and their families and for peace in Afghanistan.

He also expressed his concern for “the tensions and violent clashes” in Colombia that have caused deaths and injuries. He noted that there were many Colombians, bearing the country’s flag, in St. Peter’s Square and invited everyone to join them in praying for peace in their homeland.

This report has been updated with material from the Associated Press.