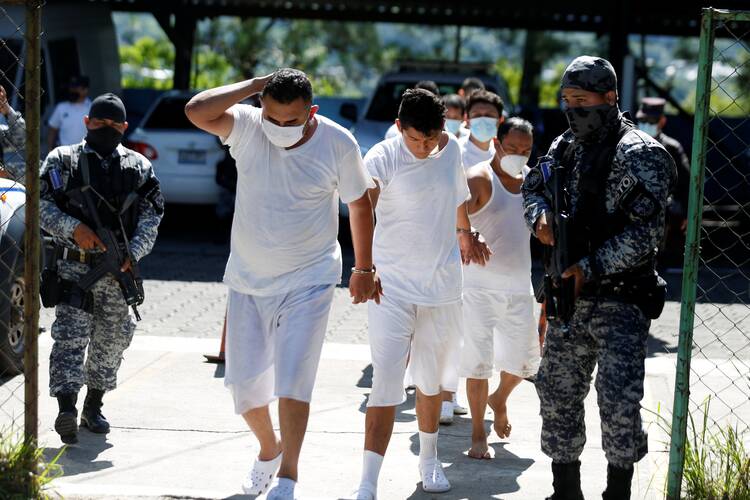 Death squads were a diabolical presence during the brutal civil war in El Salvador from 1979 to 1992. They claimed the lives of thousands of catechists, labor organizers, members of the rebel forces and their family members, men and women religious and priests, and most notoriously St. Oscar Romero and Rutilio Grande, S.J., who will be beatified in January.

Peace finally came, but extrajudicial killings—homicide at the hands of El Salvador’s military or National Civil Police and related security forces acting outside judicial sanction—have continued. Many among the more than 1,800 deaths at the hands of national police and other security forces between 2015 and 2020, according to a recent report, represent extrajudicial killings through the extermination strikes conducted by contemporary death squads or through the use of excessive force during police and security encounters with El Salvador’s notorious gang members.

Though contemporary deaths at the hands of state forces have not been directly related to political tensions, the official impunity for such acts that characterized the war years persists. Gerardo Alejandro is one of the researchers at the Observatory of Human Rights at the José Simeón Cañas University of Central America, which last month published an analysis of contemporary extrajudicial killings in El Salvador. He explained that impunity for death squad crimes has a long history in El Salvador.

Many among the more than 1,800 deaths at the hands of police and security forces in El Salvador between 2015 and 2020 represent extrajudicial killings.

“During the civil war, there were a lot of reports of extrajudicial killings, and most of them went unpunished,” Mr. Alejandro said. A broad amnesty law passed in 1993 also “managed to sweep all the cases, all the reports under the rug. And now it is 30 years later, and I believe that the violence that wasn't attended to at that time is the same violence that we are experiencing in these times.”

After the war ended, El Salvador fell victim to a new and relentless form of civil violence. Drug and human trafficking gangs have made El Salvador one of the most violent societies on earth. Though the numbers have declined significantly since 2015 when more homicides per capita occurred in El Salvador than in any other country in the world, the Central American nation still regularly figures among the world’s most dangerous states.

El Salvador’s contemporary death squads do not engage in political liquidation, according to the observatory’s analysis. Their targets have largely been criminal suspects or innocent bystanders caught up in the violence. “These squads apply a modus operandi that simulates legal actions such as searches, house raids and other police-like operations,” Mr. Alejandro said.

The observatory found that between 2015 through 2020 killings by police peaked in 2016 at 603 and have been in a sharp decline since. In 2020, the observatory recorded 88 cases of homicides by security and police that likely include the extrajudicial homicides described in its analysis.

The report focused on 13 recent cases of potential extrajudicial homicides—five were described in reports from El Salvador’s Human Rights Ombudsman office and eight from the U.C.A. Human Rights Institute. They concluded that official narratives of “armed confrontation” in these instances were not convincing. In fact, these researchers believe the confrontations described by police never occurred, suggesting that the fatalities that resulted were closer to outright executions of suspects by police and security forces.

El Salvador’s contemporary death squads do not engage in political liquidation. Their targets have largely been criminal suspects or innocent bystanders caught up in the violence.

More people were killed than wounded during arrests by police and security forces in the five-year period reviewed by the observatory, suggesting a systemic, excessive use of force. In 2017, El Salvador’s “lethality index” showed that five persons died for every one person wounded during “armed confrontations” with police and security. By 2020 that rate had diminished to 1.4 deaths per one wounded during arrests, a lower ratio but still a suspiciously disproportionate outcome, according to observatory researchers.

The report concludes: “Contrary to the principles of proportionality, legality and strict necessity, these types of abuses of lethal force become arbitrary deprivations of life by state agents.”

“What the study shows is that there is abuse of force on the part of the state institutions, that there is cover-up and that there is no desire to thoroughly analyze reality, much less to make proposals that improve the situation," José María Tojeira, S.J., the director of U.C.A.’s Human Rights Institute, said during a presentation of the report’s findings to local media in San Salvador on Sept. 9.

Fifteen clandestine “extermination groups” have been uncovered by public ministry investigators in El Salvador, according to the report. The hit teams include current and former police and security personnel as well as civilians. They work in cooperation with security forces, planning “arrests” and gathering intelligence on targets from information passed on by police and security forces on active duty, according to researchers. The observatory believes at least 188 people were liquidated by these death squads between 2016 and 2020.

Researchers tracked the cases of 1,824 victims of lethal violence at the hands of El Salvador’s national police. Almost half of the victims of extrajudicial killings were between 18 and 30 years of age. Over 90 percent of the instances where police and other security forces were prosecuted were dismissed. Most—78 percent—were definitively dismissed, “which means that the facts [of the case] will never be known,” said Mr. Alejandro. According to the report, between 2015 and 2020 1,365 police and military personnel were prosecuted for femicide and homicide—but only 25 were convicted, less than 2 percent of the total prosecutions.

The cases are being investigated, when they are investigated at all, as simple homicides, not as crimes committed by agents of the state.

The report blames the impunity with which the death squads continue to operate on “deficient public policies and government strategies where state agents repress society and promote patterns of violence.” The cases are being investigated, when they are investigated at all, as simple homicides, Mr. Alejandro explained, not as crimes committed by agents of the state. El Salvador, in fact, does not have a specific criminal code that applies to homicide by members of official security. That creates an investigatorial lacuna, he argues, where state actors behind death squads can remain hidden.

A degree of impunity for homicides committed by agents of the state became institutionalized in El Salvador after peace was achieved with the rebel forces of the Farabundo Martí National Liberation Front. The F.M.L.N. disarmed and re-established itself as a legitimate political party in 1992. Five days after a U.N. truth commission report released in March 1993 attributed 85 percent of human rights abuses during the 12-year civil war to state and military actors, including thousands of extrajudicial killings, a general amnesty was pushed through the Salvadoran Congress by the ruling Nationalist Republican Alliance, known by its Spanish acronym Arena.

In 2016 that amnesty declaration was itself nullified by El Salvador’s Supreme Court, but legislative efforts to formalize a new amnesty law continued even as some prosecutions and investigations into human rights abuses during the war, including notorious incidents like the assassination of St. Oscar Romero and a massacre of villagers at El Mozote, attempted to get back on track after being suspended for years.

Critics of Salvadoran President Nayib Bukele say his recent moves against the independence of the Salvadoran judiciary have cast doubt on the possibility that those investigations will ever result in convictions of the actors and masterminds behind the violence. America asked both the Bukele administration and the National Civil Police to comment on the allegations raised in the U.C.A. observatory report but so far has received no response. Mr. Alejandro reports that while the observatory’s presentation on its findings was well covered in local media, Salvadoran officials have so far declined to respond even informally to the concerns it raises.

Mr. Alejandro speculates that part of the reason extrajudicial homicide as an unspoken state policy survives is the support it receives from many among the general public in El Salvador. Everyday Salvadorans have become exhausted by the daily violence perpetrated by gang members. They may hope, he said, that the extrajudicial killings will diminish the nation’s soaring crime rate.

Part of the reason extrajudicial homicide as an unspoken state policy survives is the support it receives from many among the general public in El Salvador, exhausted by the daily violence perpetrated by gang members.

“The political will to use other kinds of [anti-crime] strategy is very low,” Mr. Alejandro said, “because people want quick results. They want action.

“They don't want to invest in education or something that could potentially decrease violence in five or 10 years. They want the violence to stop now.” Though crime has indeed diminished during the Bukele administration and El Salvador has experienced a corresponding decline in extrajudicial killings, advocates and researchers at the observatory say they will continue to track the problem. “We must not forget that the issue [of state sanctioned homicide] is still there,” said Mr. Alejandro. “It hasn’t been attended to yet.”

Mr. Alejandro believes that in the end impunity for such crimes only makes Salvadoran life more violent.

Beyond the obvious fact that even the worst criminals do not deserve to be terminated outside the law, he noted that many innocent bystanders or mistaken targets are often caught up in extermination squad attacks. And he worries that it may only be a matter of time before police and security death squads now focused on real or perceived criminals turn their attention to suspected enemies or antagonists of the state.

“We are concerned about Bukele’s government,” Mr. Alejandro said. “He has ramped up the militarization of public security and even has made remarks about the army fighting ‘internal enemies.’ Those kinds of words can be interpreted as a threat to the opposition.”

He added, “If violence, and gangs, have been controlled and subdued, why do we need 20,000 more soldiers? Why does the army need to have an increase in every annual national budget? In this kind of violent country, where the wounds from the war have not properly healed and the memories are still fresh, it’s not a surprise that Bukele has been labeled as an authoritarian head of state, and pretty much a de facto dictator.”

In April 2020 the president “authorized” the use of lethal force against gang members by police and security forces in a crackdown against escalating crime.

The United States has long supported Salvadoran police and military in annual foreign aid packages, but those U.S. dollars have in recent years become less reliable. In 2019 the Trump administration held up U.S. support in order to pressure Salvadoran officials to do more to halt migration, and in May, U.S.A.I.D. Director Samantha Powers halted aid to the national police and other government agencies to protest the growing authoritarian tendencies of Mr. Bukele.