Bishop Stowe: Catholics deserve to know if their priest is unvaccinated 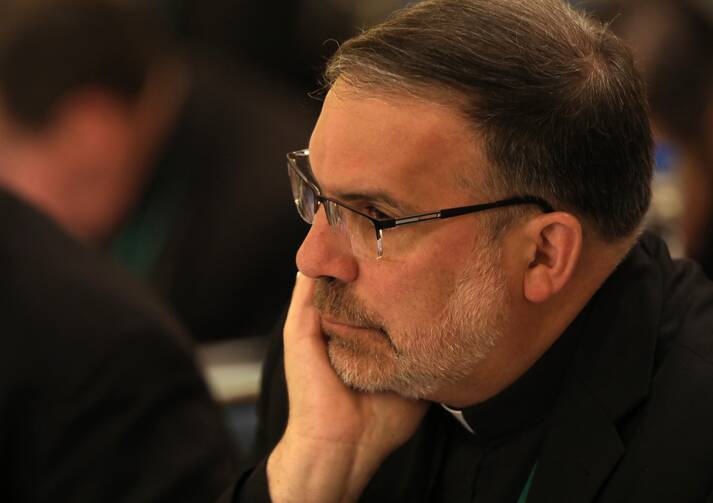 Bishop John E. Stowe of Lexington, Ky., listens to a speaker during the fall general assembly of the U.S. Conference of Catholic Bishops in Baltimore Nov. 12, 2019. (CNS photo/Bob Roller)

Bishop John Stowe, O.F.M.Conv., last month asked that diocesan employees working at the Catholic Center in the Diocese of Lexington, Ky., vaccinate themselves against Covid-19, extending a mandate that had already been announced for faculty and staff at Catholic schools. The bishop said the diocese let go of “a handful” of employees who refused. When it came to priests in the diocese, the bishop said he turned to “moral persuasion,” urging them to vaccinate themselves as a way to protect parishioners. That seemed to work. About 92 percent of the diocese’s 50 priests have been vaccinated, a rate that puts them as a group well ahead of the 61 percent of adults in Kentucky who are fully vaccinated.

But for the few priests who chose not to be vaccinated, the bishop believes they owe it to their parishioners to be upfront about their status.

“When I found out that four of them still were not vaccinated, I said they had to disclose that to their people because people were expecting they would be vaccinated,” Bishop Stowe told America. He said he also told the unvaccinated priests that “they couldn't go into the homes of the sick or the homebound or be in close proximity” to worshippers.

For the few priests who chose not to be vaccinated, Bishop Stowe believes they owe it to their parishioners to be upfront about their status.

News that at least two of the priests chose not to be vaccinated was revealed over the weekend. Videos of Masses held Sept. 11 and 12 at Christ the King Cathedral in Lexington include announcements at the end of Mass stating that the cathedral rector, the Rev. John Moriarty, and the parochial vicar, the Rev. David Wheeler, are unvaccinated.

Bishop Stowe was present at a Mass celebrated Saturday at the cathedral, during which a deacon read a statement attributed to Father Moriarty.

“The bishop has asked that Father David and I, Father John—I’m speaking for Father John—make an announcement that we are not vaccinated, so people can decide if they wanted to attend Mass where they were celebrating,” the deacon said.

Bishop Stowe said he had no regrets mandating a vaccine for diocesan employees, especially those who work with children.

Bishop Stowe said he has received feedback from local Catholics who were upset to learn that some of their priests were unvaccinated, as well as other messages angry at him for requiring priests to make their vaccination status public. But he said he had no regrets mandating a vaccine for diocesan employees, especially those who work with children.

“Kids, especially those under 12, have no choice about whether they get vaccinated,” he said. “And so it seemed to me that if teachers are going to be in a classroom with kids for several hours a day, in an enclosed space, they need to be vaccinated.”

Pope Francis, as well as many U.S. bishops, have encouraged Catholics to be vaccinated against Covid-19. Some bishops have gone so far as to say that religious exemptions should not be given to individual Catholics who do not wish to be vaccinated.

Like many states, Kentucky is experiencing a surge in Covid-19 infections.

Last week, the state marked more than 8,000 deaths from Covid-19, and the positivity rate hovers around 14 percent—an alarmingly high rate that indicates that the virus is widespread. Gov. Andy Beshear pleaded with the state’s residents to get vaccinated, insisting that it was one of the best ways, in addition to masking, to prevent more hospitalizations and deaths from the virus.

Some bishops have gone so far as to say that religious exemptions should not be given to individual Catholics who do not wish to be vaccinated.

“Please wear a mask when you’re outside of the home but otherwise indoors. This is killing a lot of people, and we can prevent it,” he added. Mr. Beshear also ordered the National Guard to assist overwhelmed hospitals. Children are being infected at higher rates than any other age group in the state.

“The problem now is we have been trying to educate based on science, but I think most of the education that is happening now is based on tragedy, personal tragedy,” said Dr. Ryan Stanton, an emergency room physician in Lexington.

Seventy percent of Kentucky’s hospitals are reporting critical staff shortages—the highest level yet during the pandemic, the governor said.

“People who continuously appeal to their right to privacy and the right to their individual conscience are losing sight of the common good,” Bishop Stowe said.

“Our hospitals are at the brink of collapse in many communities,” said Dr. Steven Stack, Kentucky’s public health commissioner.

“It’s almost pointless at this moment because people have made up their minds one way or the other,” he said. “There’s no rational persuasion that seems to work. They want to believe every conspiracy theory and everything they read on their preferred websites rather than the facts.”

Most upsetting to him, however, is that he feels Catholics who refuse to be vaccinated are ignoring a basic tenet of Catholic social teaching: the impetus to serve the common good.

“People who continuously appeal to their right to privacy and the right to their individual conscience are losing sight of the common good,” he said. “And I haven’t heard anybody argue that [refusing a vaccine] is for the common good. It’s all about their own personal preferences and beliefs.”