Amid Ortega’s crackdown on opponents, is the Catholic Church in Nicaragua next? 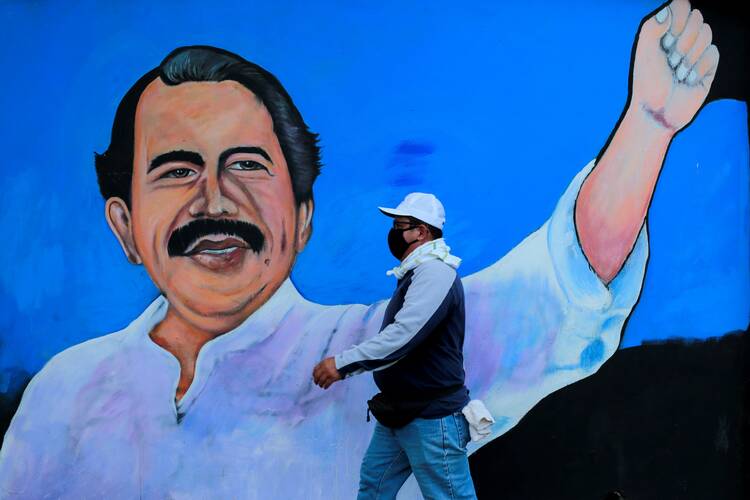 Even before the interview began, the priest warned that America could not use his real name. “They don’t like what I’m doing here,” he said. “I’m on a list of people that have been critical of the government. They’re constantly looking at what I’m doing. It’s not safe to speak publicly about what’s happening in Nicaragua.”

“Father Francisco” works in the north of Nicaragua, where he supports impoverished rural communities near the border with Honduras. He spoke with America in mid-August while he was in San Jerónimo. Members of the local community there, Afro-Nicaraguan miskitos, told him about illegal land grabs by settlers flocking into the region from other parts of the country.

“They’re chasing the Indigenous population away, using violence against them,” he said. “But there’s nothing we can do, there’s no one we can turn to. The government won’t listen because these people, these invaders, they are the government.”

As Nicaragua prepares for a general election in November, Mr. Ortega has ramped up a broad repression of dissenting voices.

According to Father Francisco, the people forcing the miskitos from their lands are allied with a member of Nicaragua’s National Assembly from the ruling Sandinista Front for National Liberation. That party is headed by President Daniel Ortega and his wife, Vice President Rosario Murillo. Criticizing that assembly member, he said, means criticizing the regime, something that has become an extremely hazardous activity in Nicaragua.

As Nicaragua, one of the poorest nations in the Americas, is preparing for a general election in November, Mr. Ortega has ramped up a broad repression of dissenting voices. Using an anti-treason law passed last December by a National Assembly filled with political allies, Mr. Ortega’s regime has arrested no less than seven candidates running for president or vice-president over the past few months. A guilty verdict could lead to 15 years in prison.

Another prominent presidential hopeful, Christina Chamorro, the daughter of former president Violeta Chamorro, was arrested on money laundering charges. Some political opposition parties, like the Citizens Alliance for Liberty, have been banned outright.

Press freedom and human rights groups warn that the persecution of activists and journalists is also on the rise. Álvaro Leiva, the executive secretary of the Nicaraguan Pro-Human Rights Association, told America that his organization believes more than 140 people are currently in jail as political prisoners in Nicaragua. He believes many routinely suffer physical abuse and endure abysmal living conditions. Many others have fled to neighboring Costa Rica and the United States.

“We still get reports of threats, harassment, physical abuse every day,” Mr. Leiva said, speaking from Costa Rica’s capital of San José, where he currently resides. He fled Nicaragua himself in August 2018.

Now many, including Father Francisco, fear Mr. Ortega may go after his last formidable opponent in NIcaraguan society: the Catholic Church.

On July 30, during a ceremony commemorating the founding of Nicaragua’s air force, Mr. Ortega attacked the church in a convoluted speech rife with Biblical references. “They were the ones who went into exile, and every day they are exiling themselves more. They were Pharisees,” Mr. Ortega said, according to the Nicaraguan newspaper La Prensa. “Christ called them Pharisees when he found them in the temple and whipped them out and the Pharisees have not disappeared, there they are walking in elegant dress and talking as if these were saints, the Nicaraguan clergy. They have no respect at all for Christ, no respect for God.”

Many fear Mr. Ortega may go after his last formidable opponent in NIcaraguan society: the Catholic Church.

The Archdiocese of Managua, in turn, sharply criticized the government in a statement released on Aug. 10. The archdiocese’s Justice and Peace Commission accused the regime of curtailing freedom of speech, jailing opponents, restricting the visas of foreign priests in the country, and making free and fair elections in November all but impossible. It also accused the Ortegas of mismanaging the Covid-19 pandemic and relief efforts in the wake of a series of devastating hurricanes that hit Central America last year. As a result, the letter said, desperate Nicaraguans are leaving the country by the thousands.

“The electoral process that should be a civic celebration has been experienced with fear and uncertainty because there are no conditions for democratic elections,” the archdiocese said in the statement, adding: “It hurts us to see a new wave of migration of Nicaraguans, the majority of them youths, who feel forced to leave their fatherland because of insecurity, unemployment, uncertainty about the future of the country.”

The church and Mr. Ortega had been alliedfor years. The former socialist guerrilla leader, head of the Sandinista movement that ousted the U.S.-backed dictator Anastasio Somoza in 1979, first led a socialist government until being voted out of office in 1990. He became president for the second time in 2007.

In exchange for support from the church, Mr. Ortega, a longtime atheist, moderated his leftist views, adopted strongly religious rhetoric and banned abortion. In 2018, however, Mr. Ortega’s relationship with the church soured after security forces and pro-government paramilitaries violently cracked down on mass protests against Mr. Ortega and Ms. Murillo. More than 300 people were killed during the violence, according to Human Rights Watch, while many more were arrested and tortured.

As America reported, Nicaragua’s Catholic Church criticized the crackdown while it attempted to mediate between the regime and the political opposition. Some priests provided shelter and medical assistance to protesters and became threatened themselves.

“We’re the only sector in the country that the regime has not cracked down on yet. Signs have increased over the past few years that they’re planning to persecute the church as well.”

In the aftermath of the crisis, as Mr. Ortega strengthened his stranglehold on the country, the church occasionally became the target of violence. In 2019, a pro-government crowd attacked churchgoers in Masaya, and unidentified attackers firebombed a chapel in the cathedral of the capital of Managua. Managua’s auxiliary bishop Silvio Baez, who became the face of church opposition during the crisis of 2018 and a celebrity on Twitter, was called to the Vatican indefinitely by Pope Francis one year later.

“Yes, we are afraid, there’s no denying that,” said the Rev. Carlos Avilés, the vicar of the Archdiocese of Managua. “We’re the only sector in the country that the regime has not cracked down on yet. Signs have increased over the past few years that they’re planning to persecute the church as well.”

So far the regime has not yet physically attacked or jailed any priests or senior church officials, but many priests, such as Father Avilés, believe it may just be a matter of time. Since last year, Mr. Ortega’s regime, with complete control over the National Assembly, the Supreme Courtand the vast majority of the country’s media, passed a number of almost comically draconian laws aimed at curtailing any dissent.

Besides the anti-treason law, the National Assembly made it illegal in October 2020 to publish “fake news” and prohibited foreign funding of nonprofit agencies, politicians and journalists. The former had a chilling effect on independent journalism, while the latter forced a host of nonprofits to cease operations in the country. Most recently, a presidential decree even made it officially illegal for foreign governments and organizations to give an award or honorific to Nicaraguan citizens anywhere in the world without consent from the Nicaraguan government.

Catholics: Haiti deserves your attention—earthquake or not
J.D. Long-García

America made several attempts to reach Nicaraguan Vice President Murillo, who is in charge of public relations in the Ortega government, for comment via email and telephone but received no answer.

The authoritarian laws, arrests of political candidates and constant intimidations of opponents of the regime lead critics to believe that free elections in November are impossible and that the tensions and repression in the country will continue to rise.

“I don’t think it’s possible at all to have elections. There is almost no opposition left, and what little there is, is divided over a whole host of issues,” Father Avilés told America. “Some support abortion, others don’t; they can’t agree on how to deal with Ortega.”

He added that, despite the fear of attacks on the church, Nicaragua’s bishops and priests are largely united in their opposition to the regime. “There are some priests who have decided to no longer speak out against the government,” he said, explaining that some priests went silent after receiving money from the government for restoration work on church buildings. “But the majority stands united,” Father Avilés said. “We won’t leave the country either. We are represented everywhere in the country. We know what the people want precisely because of that.”

Father Francisco agrees. “We need to continue our work, even if it means that we have to assume a lower profile.”