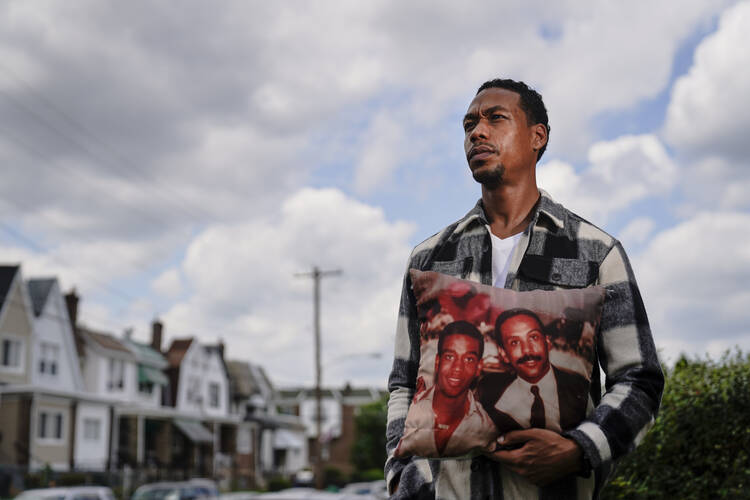 In this July 9, 2021, photo Brett Roman Williams poses for a photograph while holding a pillow with a photo of his father, Donald Williams, lower right, and brother Derrick Williams who both were killed by gunfire 20 years apart, in Philadelphia. (AP Photo/Matt Rourke)

With violent crime rising in a number of U.S. cities, Chicago’s Cardinal Blase Cupich is urging Catholics to consider how they might contribute to a more just and peaceful society, in part by listening deeply to people with experiences different from their own.

“The comfort of normalcy we had hoped for is being spoiled by a menacing violence that threatens all of us,” Cardinal Cupich wrote in his July 9 letter. “Understandably, we want this horrifying situation resolved without delay.”

Cardinal Cupich, who has repeatedly called on Catholics to support tighter gun laws, noted the many calls from civic and government leaders for more effective policing, criminal justice reform, slowing the flood of illegal guns, reducing gang violence, investing in neighborhoods, providing resources for education and support for families. As a spiritual leader, the cardinal wrote, he sees a deeper crisis in which human beings express an unwillingness “to comprehend that we are inextricably connected with each other.”

With violent crime rising in a number of U.S. cities, Chicago’s Cardinal Blase Cupich is urging Catholics to consider how they might contribute to a more just and peaceful society,

Chicago has long struggled with gun violence, and this summer has been no different. Over the 4th of July weekend, at least 104 people were shot in the city. Nineteen people died. More than 2,000 people have been shot in Chicago this year, according to the Chicago Tribune. Homicides and shootings are also up from the same period last year in Los Angeles, Minneapolis, Portland, Baltimore, Baton Rouge and Houston.

On Monday, President Biden discussed the rise in crime with police and civic leaders in a meeting at the White House. The president was expected to talk through the work federal law enforcement is doing to stop the flow of illegal guns, including new strike forces in Chicago, New York, Los Angeles, San Francisco and Washington, D.C., to help take down illegal gun traffickers and a new “zero tolerance” policy for dealers who sell guns illegally. A federal effort is underway to expand and enhance community violence interruption programs in 15 cities.

Invoking Pope Francis’ 2020 encyclical “Fratelli Tutti,” Cardinal Cupich wrote in his letter, “If we lose that sense of interconnectedness, we also lose our sense of compassion, empathy and responsibility for each other. And that counts as an incalculable spiritual loss, with profound consequences for how we live together as neighbors, as members of the same human family.”

“If we, the people of God, are to remain faithful to our identity and our calling, we must respond to the challenge to human solidarity that violence has provoked,” he wrote.

“If we, the people of God, are to remain faithful to our identity and our calling, we must respond to the challenge to human solidarity that violence has provoked,” he wrote.

The cardinal also wrote that while faith “does not give us ready-made solutions to complex problems,” it does offer the consolation that, in trusting God, “we can move forward,” and he offered several suggestions for how to help. Those tips included asking questions and listening to answers “even when what we are hearing proves painful.”

He urged people to stay connected following more than 15 months of isolation during the height of the pandemic.

“The great temptation during a time of crisis is to retreat to what we consider a safe space. In fact, what we most need is to go out of our comfort zones and accompany one another, even when that calls for effort and even some risk,” he wrote. “For people of faith, no matter the severity of the crisis, the last word is trust in God.”