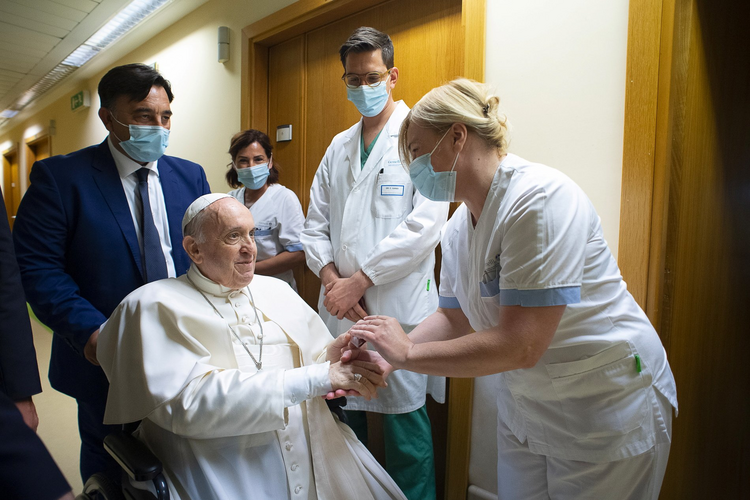 Pope Francis gives a rosary to a member of the medical staff at Gemelli hospital in Rome July 11, 2021, as he recovers following scheduled colon surgery. Earlier the pope led the Angelus from a balcony at the hospital. (CNS photo/Vatican Media via Reuters)

Pope Francis “is continuing his planned treatment and rehabilitation, which will allow him to return to the Vatican as soon as possible.”

The director of the Holy See Press Office, Matteo Bruni, reported this July 13 in the eighth bulletin on the pope’s condition since his operation. The report, which provided no further specific information, is based on information received from the pope’s doctors at the Gemelli Hospital in Rome.

Yesterday’s report said the pope would remain in hospital “some more days” to “optimize” the medical and rehabilitative therapy that he is receiving. An earlier report estimated that the pope would remain in hospital for “around seven days” after his intestinal operation “unless there are complications.” Today’s report provides no indication as to when the pope may return to Santa Marta.

An earlier report estimated that the pope would remain in hospital for “around seven days” after his intestinal operation “unless there are complications.

In today’s report, Mr. Bruni said that among the many patients that Pope Francis has met during his time in the Gemelli Hospital, “he addressed a special thought to those who are bedridden and cannot return home” and prayed that they “may live this time as an opportunity, even if experienced in pain, to open themselves with tenderness to their sick brother or sister in the next bed, with whom they share the same human frailty.”

Last Sunday, Francis visited a number of patients on the same floor of the hospital and met children in the oncology ward. He also greeted the medical staff and nurses who care for them and gave each one a rosary. Photos and videos of his Sunday visit have been released by Vatican media.

From his hospital bed, Francis sent a telegram to Cardinal Fridolin Ambongo Besung, O.F.M., archbishop of Kinshasa, the capital of the Democratic Republic of the Congo, regarding the death last Sunday of his predecessor. Cardinal Laurent Monsengwo Pasinya died last Sunday in Paris where he was undergoing medical treatment. Francis knew him well and greatly admired his pastoral leadership of the church and his courageous, tireless work for justice and peace in his homeland. Francis had appointed him to his council of cardinal advisors.

The Vatican released the text of the pope’s telegram and said the pope was “saddened” at the news of the cardinal’s death at the age of 81. He extended his condolences to the faithful of the dioceses where the cardinal had served, as well as to the cardinal’s family.

Pope Francis visiting a child in oncology ward of Gemelli Hospital, this afternoon July 13. He is recovering there too (Photo Vatican media) pic.twitter.com/vh254tHlsD