Skip to main content
Signs Of the TimesFebruary 1, 2016 issue 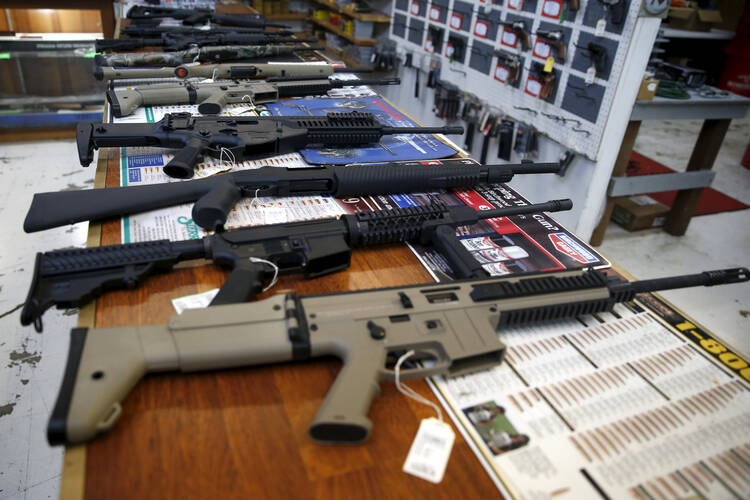 The late Cardinal Joseph Bernardin of Chicago once used the image of a seamless garment to describe a Catholic ethic of life that includes respect for the unborn; the dignity of the weak, disabled and elderly; and opposition to the death penalty. Blase Cupich, the current archbishop of Chicago, is seeking to extend that fabric to include curbing gun violence.

“This is a pro-life issue and should be front and center with all of the others,” the archbishop told me recently in a far-ranging interview that addressed a mounting homicide rate in Chicago, the strained relationship between that city’s minority communities and its police, and the growing fear nationwide over the potential for domestic terrorist attacks.

Archbishop Cupich is calling for a ban on assault weapons, stricter background checks and prohibiting the sale of guns to people on the government’s no-fly list. On assault weapons, he says, high-powered weapons that “really can only be used to create havoc and mass destruction need to be banned...and the Catholic Church can be a voice for that.”

Archbishop Cupich’s call reflects positions already taken by the U.S. Conference of Catholic Bishops. What gives his words heft is the perch from which he is making these pronouncements. Chicago experienced 468 homicides last year—more than any other city in the United States. “We all know deep down we can do better and we should do better,” the archbishop said.

Expect to hear the bishops’ conference and individual bishops speak out more forcefully on gun control in the run-up to the 2016 presidential election, Archbishop Cupich says. “The bishops do feel strongly about the taking of innocent human life whether it’s in the womb or in the streets, so I think they will speak out.”

He expressed disappointment, however, that the responsible committee of bishops did not have adequate time to revise the quadrennial voter guide “Forming Consciences for Faithful Citizenship,” which reflects Catholic positions on a number of prominent issues. Archbishop Cupich worries that this year’s revision leans too heavily on the original version, published in 2007. In its current form, curbing gun violence is dealt with largely in one paragraph. There are multiple references to other pro-life issues, like abortion and euthanasia.

“We are seeing an evolution of that document,” Archbishop Cupich says. “There was very heartfelt debate on the floor when [it] was presented.” He thinks it may have been a “mistake” not to rewrite the document “because it limited us in talking about these other issues in a more ample way. The next time we write this document we’re going to start all over.”

The archbishop notes, however, that the point of “Faithful Citizenship” is not to tell Catholics what party or candidates to vote for but to offer them “a chance to reflect on the teaching of the church. For every person who goes into the voting booth, it’s like going into the confessional. They have to own the decisions they make in going into those two boxes.”

The archbishop says he understands the fear many Catholics may feel in the wake of recent terrorist attacks in Paris and San Bernardino. But, he says, Americans should avoid that trap. “ISIS is not ideological in the sense of wanting to promote a particular faith or religion,” he says. “Their motive is to wreak havoc, to create violence in society. ISIS wants us to be divided, to be afraid. America should not let ISIS win.”

In many ways, the issues of violence facing the nation, Archbishop Cupich says, serve to underscore the importance of the Jubilee Year of Mercy that Pope Francis has proclaimed for 2016. “A jubilee means there is a sense of freedom, of release, of starting over. It’s an opportunity to integrate mercy into our conversations and actions,” he says.

“We have a coarseness in our dialogue; we have a harshness in the way we deal with conflict,” the archbishop says. “We see this in families with regard to domestic violence, across the board to violence in our streets and to international politics. The Holy Father is looking for a way in which we to make sure mercy is a part of the whole living process of relationships.” By speaking out in a clear, prophetic voice about the scourge of violence, Archbishop Cupich seems to be seeking much the same.