Father Stan Swamy has died of Covid-19, still in the custody of the Indian government 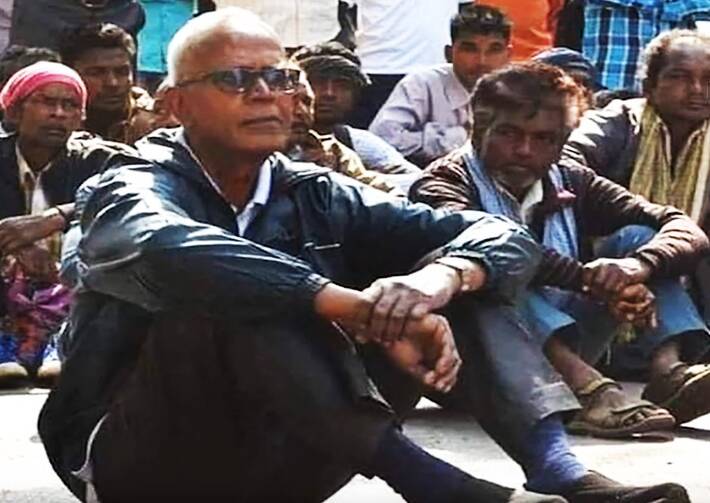 Stan Swamy, S.J., pictured in a screenshot from a video, had been incarcerated in an Indian jail since his Oct. 9, 2020, arrest. He died on July 5 from complications related to Covid-19. (CNS screenshot/YouTube)

Stan Swamy, S.J., defender of the rights of the most oppressed and impoverished tribal peoples in India, has died from complications related to Covid-19 while in his ninth month of incarceration in the custody of the Indian government. The 84-year-old Indian Jesuit priest and activist, who is the oldest person to have been charged with terrorism in India, had until May 28 been held in a Mumbai prison. He died overnight on July 5 at a Catholic hospital in Mumbai, the Maharashtra state capital. He had been transferred there at the end of May after it was suspected, and confirmed days later, that he had been infected with Covid-19 while imprisoned.

“With a deep sense of pain, anguish and hope, we have surrendered Fr. Stanislaus Lourduswami, S.J., aged 84, to his eternal abode on 5 July 2020,” read a statement issued by Jerry Cutinha, S.J., the provincial of the Jamshedpur Jesuit Province to which Father Swamy belonged. “He was a Jesuit for 64 years and a priest for 51 years,” the provincial wrote. “The Society of Jesus recommits itself to take forward the legacy of Fr. Stan in its mission of Justice and Reconciliation.”

“The Society of Jesus recommits itself to take forward the legacy of Fr. Stan in its mission of Justice and Reconciliation.”

“Stan was truly a prophet who lived his life fully for others particularly the adivasis, dalits and other marginalized communities,” Xavier Jeyaraj, S.J., the secretary of the Social Justice and Ecology Secretariat of the worldwide Society of Jesus, wrote in a statement issued hours after Father Swamy’s death. “Stan became a conscience keeper and awakened the hope in everyone. We remember and thank all those who prayed, campaigned and advocated for him and for all others in similar cases who are denied of their human dignity and rights.”

After he was repeatedly denied bail on humanitarian and medical grounds, Father Swamy was transferred on May 28 to Holy Family Hospital in Bandra, Mumbai by court order from Taloja jail, a prison on the outskirts of Mumbai where domestic terrorists awaiting trial are held under the custody of India’s National Investigation Agency.

Jharkhand Janadhikar Mahasabha, a coalition of progressive organizations that defends democracy and the rights of the oppressed in Jharkhand, the state where Father Swamy worked at Bagaicha, the Jesuit social center in Ranchi also issued a statement: “Stan has been a crusader of people’s rights for decades. He was a voice of the oppressed in Jharkhand,” the organization wrote. “His principles have been a source of inspiration for us and will continue to remain so. Stan lives in our memories. His death is a result of murder by the state.” The organization added that “We hold the NIA and the central government wholly responsible and strongly condemn their role in Stan’s death.”

At the time of his arrest, Father Swamy was already suffering from an acute case of Parkinson’s disease and lumbar spondylosis, had already undergone several hernia operations and was being treated for other geriatric illnesses. Then it was confirmed that Father Swamy had lost most of his hearing while in prison and that his general health was in steady decline there—but only after reports by his lawyers, the Jesuits, and human rights activists around the world that he was being denied adequate medical care.

Father Swamy had initially been admitted to hospital for 15 days by the High Court, but last month that stay was extended until July 5. On that day, his lawyer appeared in court to announce that the priest had died.

Father Swamy’s death came after he suffered a cardiac arrest on Sunday, July 4. He was placed on a ventilator, Ian D’Souza, the medical director of Holy Family Hospital, told the Bombay High Court on Monday afternoon, but never regained consciousness. His death was declared at 1:24 p.m. Mumbai time on Monday, July 5, the early hours of the morning in the United States.

“We have no objection to a post-mortem being conducted,’’ Mihir Desai, the senior advocate representing Father Swamy, told the High Court judges. Dr. D’Souza confirmed the causes of his death were pulmonary infection, Parkinson's disease and post Covid-19 complications.

Father Swamy had initially been admitted to hospital for 15 days by the High Court, but last month that stay was extended until July 5. On that day, his lawyer appeared in court to announce that the priest had died.

“Our deepest condolences and may his soul rest in peace,” Justice S.S. Shinde of the High Court said Mr. Desai, recognizing that had it not been for the insistence of Mr. Desai, Father Swamy may not have received adequate medical attention. “We all share this. We appreciate your efforts, you prevailed over him. He could go to the hospital, he got the best medical treatment. Unfortunately, he could not survive.”

Holy Family Hospital is a state-of-the-art facility for medical research and is administered by the Congregation of the Ursuline Sisters of Mary Immaculate, who took over the running of the hospital in 1942 from the Medical Mission Sisters.

Mr. Desai acknowledged the courts’ efforts to move his client to the hospital for care and thanked the hospital staff for all they had done to ensure Father Swamy’s subsequent treatment. But it was a case of too little too late.

Mr. Desai added that the same thanks could not, however, be extended to the Taloja jail authorities or to the National Investigation Agency, which repeatedly denied pleas for Father Swamy’s care and failed to test him for Covid-19—even after he was admitted to a state hospital three times when he had first been suspected of being infected with the deadly virus. In light of these failings, Mr. Desai called for a judicial inquiry into his client’s arrest, subsequent custody and death.

Under Section 176 of India’s Code of Criminal Procedure, the Bombay High Court noted that a magistrate was allowed to request an inquiry into a custodial death of a prisoner and gave Mr. Desai permission to proceed with the inquiry.

The court was also informed that the prison authorities would carry out a post-mortem and an inquest panchnama—a record of testimony by witnesses that is usually prepared by the police after an in-custody death—before releasing Father Swamy’s body to his friend and fellow Jesuit, Frazer Mascarenhas, who had been the octogenarian priest’s appointed visitor through his stay at Holy Family Hospital (as he did not have any family or relatives). The court ended the hearing, setting a follow-up date of July 13 for the matter.

“We sincerely thank God for the life of Fr. Stan Swamy, who broke himself and suffered so that others may have life, life in abundance,” Father Jeyaraj added in the statement from the Society of Jesus’ Social Justice and Ecology Secretariat. “We are confident that he will ‘not be a silent spectator even from heaven.’ He will continue to stand with each one of us to help us ‘to speak truth to power’ and to dedicate our lives for the poor and marginalized.”

This story has been updated since its original publication.

[Read more about why Father Stan was arrested on allegedly trumped-up accusations of sedition, charged and incarcerated for nine months in the first place.]

WATCH: Why an 84-year-old Indian Jesuit—Fr. Stan Swamy—is in prison