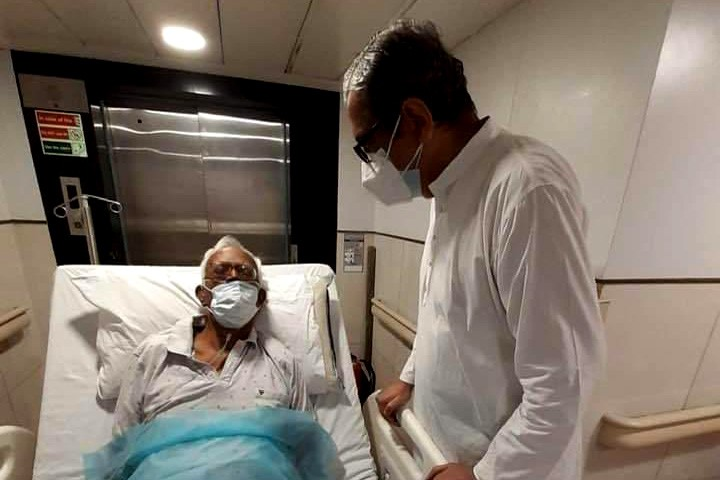 Stan Swamy, S.J., has tested positive for Covid-19, two weeks after the Jesuits in India suspected that he had been infected with the coronavirus and appealed to the court to grant the octogenarian priest temporary release on bail so that he could receive urgent medical treatment. The priest, who for four decades defended the rights of India’s most impoverished and outcast people, has been languishing in a Mumbai prison on allegedly trumped-up charges of sedition since October.

On May 21, Father Swamy refused the apparent willingness of the judges to move him to a hospital of his choosing for medical care, saying that he would rather die in prison than be moved to a hospital. He insisted that he instead be released on bail and allowed to return to his home at Bagaicha, the Jesuit social action center in Ranchi, Jharkhand, about 1,000 miles from Mumbai. Mihir Desai, his senior advocate, requested an adjournment so that he could discuss the medical transfer with his client, which the court granted, scheduling a new bail hearing for June 7.

Since returning to Taloja central prison, Father Swamy’s health has seen a precipitous decline. His legal team filed an urgent request with the court for his medical transfer, which was heard this past Friday, May 28.

Stan Swamy, S.J., has tested positive for Covid-19, two weeks after the Jesuits in India suspected that he had been infected with the coronavirus.

The Maharashtra High Court ordered Father Swamy’s transfer to a private Catholic Church-run hospital for 15 days. “Keeping in view the age of the appellant and his ailments,” the court judged, “we request the administration of the said hospital to provide one attendant continuously to look after the appellant.”

The court allowed Frazer Mascarenhas, S.J., who is a retired principal of St. Xavier’s College and the priest at a Jesuit parish in the same neighborhood as the hospital, to meet Father Swamy upon arrival at the hospital and ordered the hospital administration “to allow one police constable in the hospital to protect/guard the appellant, since he is under trial prisoner.”

Cedric Prakash, S.J., a priest and friend of Father Swamy’s and a longtime advocate for social justice, said that Father Swamy arrived at the hospital at 8:30 p.m. on Friday.

Arriving at the hospital, Father Swamy was greeted by Father Mascarenhas, but only “for a few minutes,” said Father Prakash. “Since Father Stan was not too well and showed some symptoms of Covid, he was tested for it and already put in the Covid I.C.U. unit.”

Two days later, it was confirmed that Father Swamy was infected with the SARS-CoV-2 virus.

Father Swamy is now being treated at the Jesuits’ expense in Holy Family Hospital, which is administered by the Congregation of the Ursuline Sisters of Mary Immaculate who took over the running of the hospital from the Medical Mission Sisters, who in 1942 started what is now a top facility for medical research in India.

“As of the update we have today—he is better,” Father Prakash told America this afternoon.

“He is being very well looked after!” But “kindly note that he is not on bail—just there for a 15-day treatment,” he added. “He is still an under-trial prisoner.”

Editor’s note: If you have never heard about Father Swamy’s case and want to know the details of why he has been imprisoned without a conviction and is still being held without recourse to bail, watch an interview between Ricardo da Silva, S.J., associate editor at America, and two Jesuit priests: Xavier Jeyaraj, S.J., who is the secretary of the Jesuits’ Social Justice and Ecology Secretariat in Rome and Cedric Prakash, S.J., a human rights activist, writer and longtime friend of Father Swamy.

You can also read an in-depth report about the charges against Indian human rights activists like Father Swamy and his 15 co-accused, many of whom are activists, educators and intellectuals who have long fought for the rights of people disregarded in India’s caste system, especially the Adivasi and the Dalits, members of India’s lowest caste.