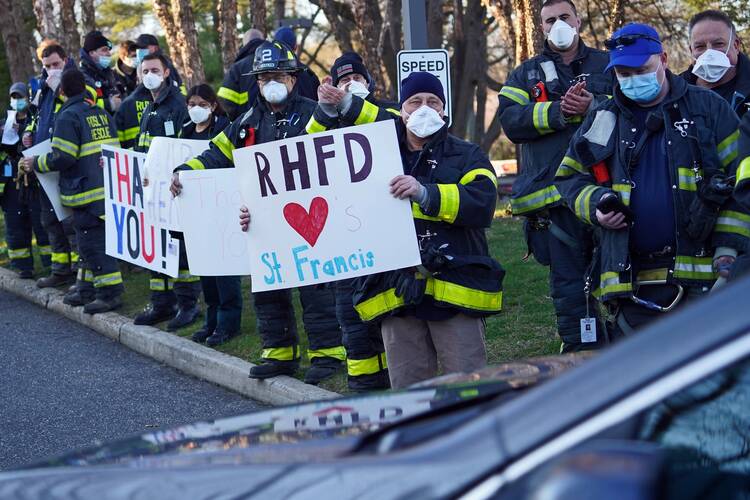 Firefighters participate in an appreciation rally for medical workers at St. Francis Hospital & Heart Center in Roslyn, N.Y., April 9, 2020, during the early stages of the coronavirus pandemic. (CNS photo/Gregory A. Shemitz)

The temperature on June 26 in Willamette Valley had reached a suffocating 104 degrees, breaking records across Oregon. As his working day drew to a close in mid-afternoon, Sebastian Francisco Perez, an immigrant from Guatemala, was moving irrigation lines on a farm near St. Paul when he collapsed. Responding firefighters were unable to revive him.

The cause of his death has not officially been determined, but according to local media, Oregon’s Occupational Safety and Health Administration has simply noted “heat” on its preliminary incident report.

Like most other states, Oregon does not have specific standards for shutting down farm worksites because of heat. In a statement released on June 30, Pineros y Campesinos Unidos del Noroeste, Oregon’s largest Latino farmworker union, pointed out that the state’s agricultural workers have endured wildfire smoke, a winter storm and now a devastating heat wave. “Workers should not have to decide between their health and a paycheck,” P.C.U.N. said.

What was the reward for accepting the risk and the losses suffered by many working families, particularly the families of Black and Latino workers disproportionately at risk of exposure to Covid-19?

The Statesman Journal reports that Mr. Perez's death, the day after his 38th birthday, could represent the first heat-related fatality of a farmworker in Oregon in two decades.

Just weeks ago, workers like this man had been celebrated for their role in helping the nation ride out the Covid-19 pandemic. Classified as “essential workers,” lauded for acts of self-sacrifice, they carried on growing, processing or delivering food; working in hospitals and nursing homes; and keeping supermarkets open and transit systems running while the rest of the country hunkered down behind closed doors, working through the crisis at their keyboards.

What was the reward for accepting that risk and the losses suffered by many working families, particularly the families of Black and Latino workers disproportionately at risk of exposure to Covid-19?

Amazon temporarily raised wages for its overworked warehouse workers while it and other retailers earned record profits. Additional safety precautions were built into processing lines after a multitude of Covid-19 outbreaks were documented in meatpacking plants.

“There was a feel-good sentiment originally during the pandemic and appropriate recognition for people who were sacrificing their own safety and well-being for the good of others,” Bishop Stowe told America on June 30, “but it never translated into actual benefits.” In a true how-quickly-they-forget moment in mid-May, Connecticut Governor Ned Lamont even authorized the deployment of the state National Guard after 4,000 nursing home workers threatened to strike for a $20 hourly wage.

He has taken a lead role in a new lobby, the Interreligious Network for Worker Solidarity, launching to support pro-labor legislation in Washington, the Protecting the Right to Organize Act. The PRO Act passed the House in March with bipartisan support, but it faces an uphill fight in the Senate.

Supporters call it the most comprehensive worker empowerment legislation since the National Labor Relations Act of 1935. The act would significantly strengthen the ability of private sector workers to form unions and engage in collective bargaining for better working conditions and wages. The legislation is meant to counter union losses in “right to work” states—which allow so-called free riders, workers who receive the benefits of union contracts but who decline to pay union dues. The measure could help reverse decades of diminishing union representation in America’s workforce.

Bishop Stowe believes the nation is overdue for a change—especially after Covid. America’s politicians “benefited as much as anybody else” from the sacrifice of workers who remained on the job in public during the crisis. Now, he wonders, how can they remain unwilling “to lift a hand to help the conditions of the workers”?

They may wish to check in with their constituents. Most Americans support workers’ right to organize, Bishop Stowe pointed out. A recent Vox/Data for Progress poll reports that 59 percent of likely voters support the PRO Act, including 74 percent of Democrats and 40 percent of Republicans.

Bishop Stowe is the most prominent Catholic representative participating with the Interreligious Network for Worker Solidarity and was a lead signatory of a statement by faith leaders released on June 30. Urging the Senate to pass the act, the Network members cited “the sacred worth of both work and workers” and their right “to form unions, bargain collectively and engage in collective action without fear of retaliation by their employers.”

“Given the centrality of labor to Catholic social teaching, we should have a stronger voice,” Bishop Stowe said. Supporting the right of workers to unionize at the church’s own institutions would help.

The letter’s signatories say that for decades, “workers’ rights in the United States have been under assault. Too many unscrupulous employers fire workers who exercise their legal right to organize; stall on negotiating a first union contract; wrongly label their workers as ‘independent contractors’ which bars them from unionizing; and regularly undermine the efforts of workers to come together.”

Current labor law means “there are no real consequences for these unethical employers” while “ethical employers are being undercut, resulting in a ‘race to the bottom.’” The signatories believe a more level playing field for union organizing will, in the end, mean improved working conditions, better wages and a higher standard of living for all working Americans.

According to the Network, the declining protection of U.S. labor laws over the past five decades “has been devastating for America’s working families.”

“In the 1950s, 1 in 3 private sector workers enjoyed union membership; today only 1 in 16 do, despite the fact that 60 million workers would vote to join a union today if given the chance,” the June 30 letter continues. “The corporate and political attacks on worker voices has resulted in the rise of poverty wages, income inequality, and the destabilization of families, communities and our democracy.”

Bishop Stowe points out that even while workers were lionized during the pandemic, one fear remained constant, that “of allowing workers to organize so that they have a collective voice and might make wages what they really should be.”

“Of course the pushback is always that [union wages] will raise [consumer] costs,” he said. This is an odd concern, he suggested, given “the discrepancy between what C.E.O.s make and what the average worker makes.”

“I don’t remember anyone ever saying that we should cut the C.E.O.s’ benefits to keep prices from rising,” he said.

“Too many unscrupulous employers fire workers who exercise their legal right to organize, stall on negotiating a first union contract and regularly undermine the efforts of workers to come together.”

Speaking during a press briefing to support the release of the Network statement on June 30, Bishop Dwayne D. Royster of Washington’s Faith United Church of Christ was especially adamant in his condemnation of a “deep level of hypocrisy” he perceives at work in the aftermath of the Covid crisis. Commenting on “institutions and corporations, especially those who have gotten bailouts over the last two years,” he said, “for them now to deny the workers that have sustained their business models, that have continued to care for America, that have continued to provide for our needs right now, is an absolute irony.”

“How about we celebrate them and make sure they have all the things they need because we do not know when we will find ourselves in this situation again?” He added, “And every political leader that has gotten an Amazon package and did not support the workers at Amazon does not deserve to get another delivery.”

The list of about 400 faith leaders who signed the letter includes 240 Catholic priests, laypeople and religious, but so far Bishop Stowe is the only signatory from the U.S. bishops’ conference. He hopes other bishops will soon join him.

“Given the centrality of labor to Catholic social teaching, we should have a stronger voice,” he said. Supporting the right of workers to unionize and pursue collective bargaining at the church’s own institutions would help. That is not always a given, Bishop Stowe acknowledges.

The possible “hesitation” of bishops to support pro-labor efforts, he said, could be “because we don’t have our own house in order too often.”

“There has been a whole more inwardly-looking church,” he said, “more concerned about catechesis and doctrine, which doesn’t always include social doctrine, [but] part of our ‘Gaudium et Spes’ version of the world still needs some revision and updating.” That is why, he said, “I stand with workers every opportunity I get because that’s where we’re supposed to be.”

During the press briefing to announce the initiative, Bishop Stowe said it was his hope that Catholic institutions could lead the way on protecting workers’ rights. “It would be hard to overestimate the centrality and the importance of dignified labor to Catholic social teaching, and hand-in-hand with dignified labor comes the right to organize,” he said.

“It really undermines our teaching authority,” he said, “if we don’t put our teaching into action.” Among Catholic health care institutions particularly, he said, “the bishops do have a voice and should be using that voice to advocate for workers.”

This story was updated on July 3 to include information about the deceased farmworker, Sebastian Francisco Perez.