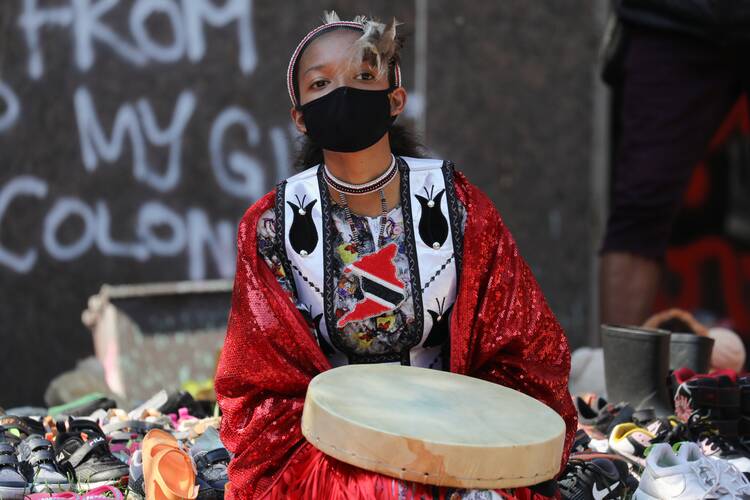 A young woman takes part in a rally in Toronto June 6, 2021, after the remains of 215 children were on the grounds of the Kamloops Indian Residential School in May. For years Indigenous people in Canada have wanted an apology from the pope for the church's role in abuse at Catholic-run residential schools. (CNS photo/Chris Helgren, Reuters)

Canada’s Truth and Reconciliation Commission has helped all Canadians and First Nations communities grapple with the sorrowful realities of their nation’s colonial past, particularly the gruesome legacy of its residential schools for Indigenous children. Those schools, many administered by Catholic religious orders and intended to be engines of assimilation, became centers of despair and brutality.

The recent discovery of hundreds of unmarked graves at two schools, and the likelihood that thousands more will be found at other residential school sites, have added to the anguish. But at least in Canada, a foundation for healing is being laid by the government-sponsored truth and reconciliation commission.

No similar process has started in the United States, though many of the same outrages likely occurred on this side of the border, in the system of more than 350 Native American boarding schools in the 19th century that were the model for the Canadian network. And just as in Canada, the Catholic Church had a significant role in the administration of this “schooling,” which stripped Native American children of their languages and cultures.

Forgiveness and healing can begin only after the most difficult part is addressed: confronting the past, speaking the truth, revealing the worst.

Beginning in 1819 and continuing through 1969, the U.S. government provided the resources and logistical support for the schools, and religious groups, including the Catholic Church, were among the willing recipients. According to the National Native American Boarding School Healing Coalition, by 1926 there were 357 schools in 30 states with more than 60,000 children. Catholic religious orders here in the United States administered 84 of the schools. The Society of Jesus managed four of them.

The Department of Interior is for the first time in U.S. history being led by a Native American. Secretary of the Interior Deb Haaland has ordered an investigation into the history of these schools and a search for graves of children who may have perished at them.

Announcing the initiative, Ms. Haaland said she hoped it would “shed light on the unspoken traumas of the past.”

It will be difficult after so long to determine the cause of death for many of the children that will be found in such graves. Many of the deceased will surely be found to have perished because of diseases like tuberculosis, which likewise claimed many lives among the school children at residential schools in Canada. But identifying TB and other forms of “natural” mortality among these schoolchildren will not tell the full story.

A thorough review of surviving records will be important to help tease out individual stories and help build a broader narrative of mortality at the boarding schools. The church in the United States should make every effort now to prepare for this Department of Interior investigation and for the larger, comprehensive undertaking to unravel the complete history of the boarding schools and the church’s role in the mistreatment of these Indigenous children.

For decades the people of God were anguished by the obfuscation on the part of those church leaders who allowed only a trickle of incomplete document releases from diocesan and provincial archives while investigators struggled to get to the truth about the abuse of children by U.S. priests and the coverup of those crimes. The church in the United States must demonstrate that it has learned from the suffering such failures imposed on survivors, their families and Catholics everywhere.

Now is the time and here is the opportunity. As this preliminary investigation begins, the church must bring everything out into the light—completely and quickly. U.S. church officials should vigorously seek out and share the archives and material locked away in chanceries, academic archives and the attics of religious communities. Forgiveness and healing can begin only after the most difficult part is addressed: confronting the past, speaking the truth, revealing the worst.

1
The six best (and six worst) Catholic Halloween costumes
Sarah Vincent
2
The Vatican is worried about artificial intelligence
Gerard O’Connell
3
Dave Chappelle’s ‘The Closer’: Empathy, Humility and the Lack Thereof
Jim McDermott
4
Most U.S. Catholics believe the Eucharist is just a symbol. The bishops want to change that.
Chaz Muth - Catholic News Service
5
‘Trust the experts’ is the new ‘obey the priest.’ But it is not getting us closer to the truth.
Luke Burgis 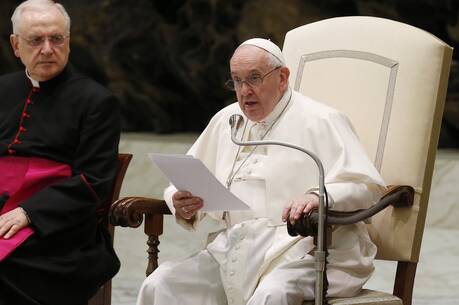 Pope Francis: The Gospel is for everyone — not just a privileged few
Today, there are many who still seek religious security rather than the living and true God, focusing on rituals and precepts instead of embracing God’s love with their whole being.
Pope FrancisOctober 27, 2021 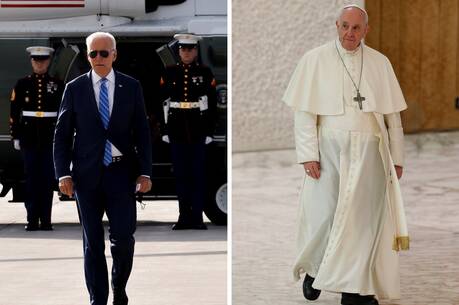 Joe Biden is taking a page from Ronald Reagan’s playbook in his meeting with Pope Francis
At one point Ronald Reagan needed a powerful ally who could help him hold on to Catholic voters — and he found that ally in John Paul II. Today, Joe Biden faces a similar situation.
Steven P. MilliesOctober 27, 2021 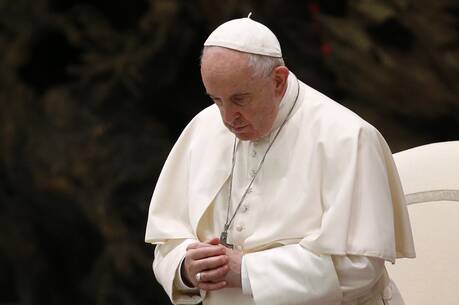 Pope Francis agrees to Canada trip to help reconciliation efforts with Indigenous peoples
Pope Francis has agreed to visit Canada in the wake of shocking revelations of the Catholic Church’s role in the abuse and deaths of thousands of native children.
Frances D'Emilio - Associated PressOctober 27, 2021