The Editors: Refugee resettlement has a political cost. It is still worth paying. 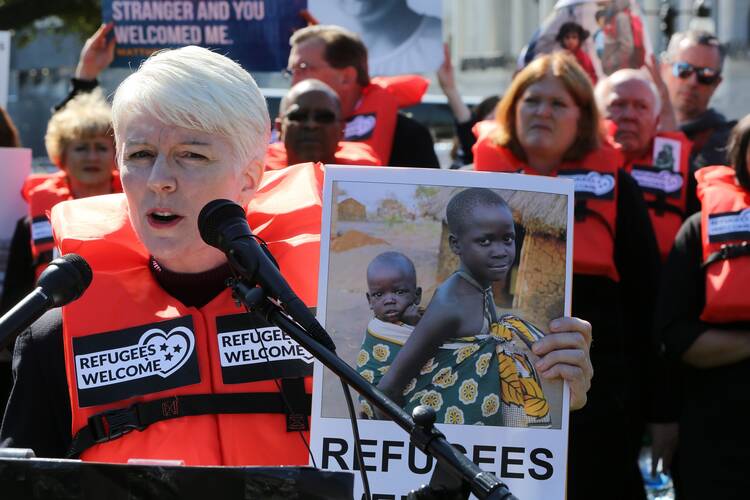 Susan Gunn, director of the Maryknoll Office for Global Concerns, speaks during a protest on Oct. 15, 2019, outside the U.S. Capitol in Washington against cuts in the number of refugees to be admitted under the U.S. resettlement program. (CNS photo/Bob Roller)

The Biden administration announced in early May that it will raise the historically low cap on refugee settlement set by former President Donald J. Trump to 62,500 refugees from 15,000. Under Mr. Trump’s draconian policy, the refugee resettlement process ground almost to a halt; the applications of over 100,000 people were put on hold indefinitely. Refugees from a number of Muslim-majority countries, including Somalia, Syria and Yemen, were blocked almost entirely, despite the devastation caused by war in all three countries. Besides allowing more applicants from these mostly Muslim nations, Mr. Biden’s ruling also provides more slots for refugees from other nations in Africa, the Middle East and Central America.

This is welcome news and a needed recognition that the United States has an obligation to ease the suffering of these people. We are not only the wealthiest nation in the world; we are a major instigator of the violence and political turmoil that has spurred refugees to abandon their desperate living situations worldwide. And despite heated rhetoric to the contrary, refugee resettlement does not have a significant negative impact on the U.S. economy. In fact, like most immigrants to the United States, refugees have historically proven to be significant contributors to the American economy within a generation of resettlement. It should also go without saying that the American people have a moral obligation to welcome the stranger, the orphan and the widow—a mandate present in the Bible and shared by almost every religious tradition.

Despite heated rhetoric to the contrary, refugee resettlement does not have a significant negative impact on the U.S. economy.

The Biden administration at first made the surprise announcement in April that it would not raise the refugee cap despite the president’s promises to do so. Mr. Biden had vowed during his 2020 presidential campaign to admit 125,000 refugees in the current fiscal year, and in February he signed an executive order to that effect, making his April decision to keep Mr. Trump’s policy in place a baffling one. But after an outcry from refugee advocacy groups and many political allies of the current administration, that decision was reversed the same day it was announced.

It was a clumsy about-face for the administration and an unsettling moment for those who expected the Biden presidency would bring about a new day for many refugees and asylum seekers. By the end of the day, refugee advocates had won a small victory but found their confidence in Mr. Biden shaken.

Why the initial decision to keep Mr. Trump’s policy in place? Two reasons seem most likely. First, Mr. Biden and his staff may have assumed that they would get a free pass on immigration issues because nothing could possibly match the cruelty of Mr. Trump’s policies and racist comments about refugees and immigrants. Even a minimal change in direction would be better than what happened over the past four years.

Second, there seems to be a political calculus at work, one acknowledged by Mr. Biden’s opponents. A significant portion of the electorate is opposed to any increase in refugee resettlement and indeed to immigration in general from poorer nations, and Mr. Trump benefited handsomely from his rhetorical stance against both. Mr. Biden’s presidency is only five months old, but members of Congress never really stop campaigning; on both the local and national levels, immigration and its echo effects remain prominent issues. Stephen Miller, the Svengali of Mr. Trump’s immigration policies, commented on Twitter that the initial decision to keep the policy intact “reflects Team Biden’s awareness that the border flood will cause record midterm losses.”

How much political capital is worth expending to fulfill one’s promises made on behalf of people no one else will fight for?

A significant loss of seats in the House or the Senate would, of course, be a serious setback for Mr. Biden’s more humane immigration policies and an impediment to his efforts toward passing immigration reform legislation, something he obviously cannot ignore. At the same time, a potential backlash is a risk of ethically sound action in every political realm, a cost that must be weighed against other costs. Choosing the politically expedient path presents no profile in courage, nor does it reflect well on the priorities of the politicians choosing it. There are times when political capital must be risked for the common good; there are times when political capital must be expended to do the moral and ethical thing.

An ancillary issue that bears on this conversation is the way we perceive political motives. After four long years of Mr. Trump’s presidency, many of us automatically seek out the nefarious motive behind any policy announcement: What is the president really after?

This is perhaps why Mr. Biden’s first attempt to continue Mr. Trump’s refugee restrictions backfired almost immediately; it seemed that “the right thing to do” was important in the run-up to the 2020 elections but was replaced almost immediately with the politically cautious thing to do. Mr. Biden has also reminded us that Democratic presidents are capable of neglecting vulnerable populations once in office. Remember that two of the more shortsighted policies in recent decades were President Bill Clinton’s 1996 welfare reform and his 1994 crime bill. Mr. Biden drafted the Senate version of the latter legislation.

On the topic of political expediency, it is also necessary at times to take the long view. The release of 2020 Census results makes it clear that the United States is in no way being overwhelmed by an influx of foreigners; further, even meeting Mr. Biden’s original goal of 125,000 resettled refugees this year would not reverse the recent slowdown in immigration to the United States.

The birthrate among American citizens continues to decrease, and the Census reports the weakest population growth since the 1930s. Economists and social scientists see declining rates as ill omens for the future. Both the U.S. social safety net and its economic effectiveness rely on population growth, especially as the entire baby boom generation begins to draw on entitlement programs and health care systems.

In the long run, refugee resettlement may turn out to be a “minor” issue for the Biden administration, both economically and politically. But it is not one easily dismissed—and not just because of the fate of the refugees in question. A peek into the process by which the sausage gets made points again to the question of political and ethical calculus: How much political capital is worth expending to fulfill one’s promises made on behalf of people no one else will fight for? When is doing the right thing not the smart thing but the courageous stand?