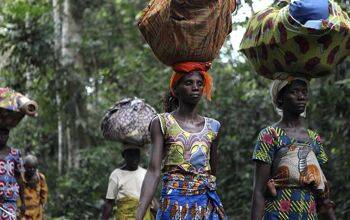 In remarks made in commemoration of the United Nation’s World Refugee Day June 20, Ambassador Johnny Young, executive director of Migration and Refugee Services of the U.S. Conference of Catholic Bishops, urged the United States to maintain its role as a global leader in refugee protection. “Without U.S. leadership, the situation for the world’s 15 million refugees would be much worse,” Ambassador Young said. “We must remain committed to refugee protection and to the U.S. refugee program, which saves thousands of lives each year.” Ambassador Young expressed the support of the USCCB for the Refugee Protection Act, introduced in Congress in June. The proposed legislation would strengthen protections for refugees and asylum-seekers who find safe haven in the United States. The legislation would, among other things, eliminate the one-year filing deadline for aliens in the United States to apply for asylum, authorize the Secretary of State to designate certain vulnerable groups as eligible for expedited adjudication of refugees and facilitate the reunification of families who have been unnecessarily kept apart. “A large number of refugees rescued by our nation are themselves victims of terror and are in need of protection from such threats,” Ambassador Young concluded. “We can ensure the integrity of the U.S. refugee program without sacrificing its vitality and capacity.”