Why did the Biden administration have to be reminded of its commitment to refugees? 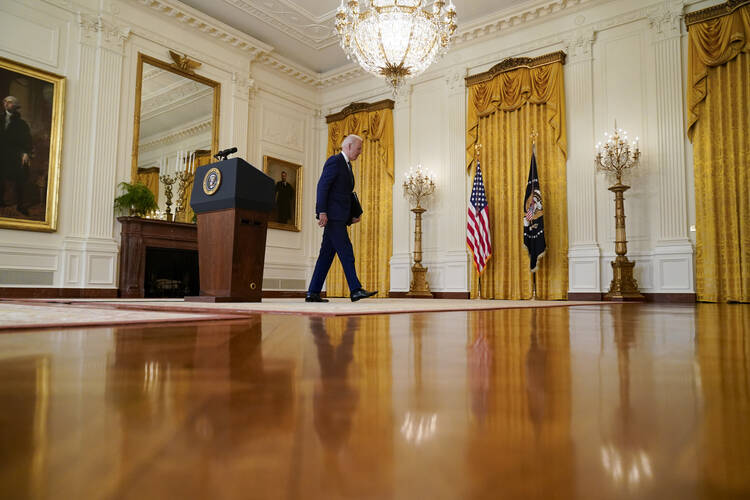 President Joe Biden leaves after speaking about Russia in the East Room of the White House, Thursday, April 15, 2021, in Washington. (AP Photo/Andrew Harnik)

Why did the Biden administration have to be reminded of its commitment to refugees?

When the Biden administration announced last week that it would maintain the cruelly low annual cap on the numbers of refugees admitted to the United States, set by former President Donald Trump, it not only undercut President Joseph Biden’s consistent message of welcome toward refugees but also seemed to reflect little awareness of the reaction it would inevitably provoke.

Indeed, the picture emerging is that the Biden administration was caught off-guard by the reaction. They were surprised enough, in fact, to do a quick if clumsy about-face.

Refugees and displaced persons are not just the concern of "progressives," but a broad concern of Americans, including Catholics.

There are two answers to this question that should worry people who care about refugees.

One is that at least some in the Biden administration think that Mr. Biden not being Mr. Trump was enough to earn the administration a pass on this issue. Mr. Biden criticized Mr. Trump for his refugee policy in the general election, even touting the importance of his Catholic faith on the matter. But if anyone in the administration thought this was enough, they were wrong. Refugees and displaced persons are not just the concern of "progressives," as more than one story has suggested, but a broad concern of Americans, including Catholics.

This refugee snafu, along with Mr. Biden’s great surprise at the questioning on immigration at his March press conference, suggests that the Biden administration should change its expectations of the scrutiny it will receive.

If there is one area where the second Catholic president of the United States could plausibly channel Pope Francis, it is refugee policy.

Another possibility is that Mr. Biden’s personal commitment to refugees has not been matched by the efforts of the administration to develop policies and capacities. There is almost certainly some truth to this. Mr. Biden signed to great fanfare an executive order on Feb. 4 to begin the process of raising the Trump refugee limits. But the recent announcements from the Biden administration seem to admit defeat in carrying through on that.

Whatever the particulars, Mr. Biden’s concern for refugees has not translated into concrete policy actions. And a president does not govern by himself. He needs his whole administration.

Let’s state the obvious: Mr. Biden has sought to be identified with Pope Francis. And if there is one signature issue for Pope Francis, it is the plight of refugees, immigrants and displaced persons. It is fundamental to “Laudato Si’” and “Fratelli Tutti.” It was the theme of his trip to Lampedusa, his first trip as pope. It is the reason he created Michael Czerny, S.J., undersecretary at the Vatican’s Dicastery for Promoting Integral Human Development, a cardinal.

The Holy Father has spoken of parrhesia, and that seems to be what President Biden, and his whole administration, needs.

If there is one area where the second Catholic president of the United States could plausibly channel Pope Francis, it is refugee policy. That he is not doing so is distressing.

The Holy Father has spoken of parrhesia, and that seems to be what President Biden, and his whole administration, needs.

Parrhesia means boldness, particularly a boldness inspired by the Holy Spirit. As Pope Francis wrote in “Gaudete et Exsultate,” “Holiness is also parrhesia: it is boldness, an impulse to evangelize and to leave a mark in this world” (No. 129).

Proclaiming the good news of welcoming the stranger is something we all need to hear, but it requires parrhesia precisely because of how challenging it is. The term implies more than speaking “prophetically,” as if bold words were all that is needed, but also means inspiring and guiding, offering clear direction and robust support to the slow, difficult work of living in the world. That includes policy-making.

When Italy struggled to settle refugees, privately-funded faith groups stepped up with a solution. The United States should do the same.
Laurie Johnston, David Sulewski

This is not to deny the obstacles. According to CNN, President Biden was influenced by the “optics” of the border crisis when he chose initially not to raise the refugee intake cap; never mind that there are separate processes for refugees and immigrants. But Mr. Biden should be working to reshape those optics, not caving to the public perception. And that again will require parrhesia.

Embracing the boldness called for by Pope Francis will make President Biden a better leader, Christian and human being. It will also ensure that he does not forget the poor.