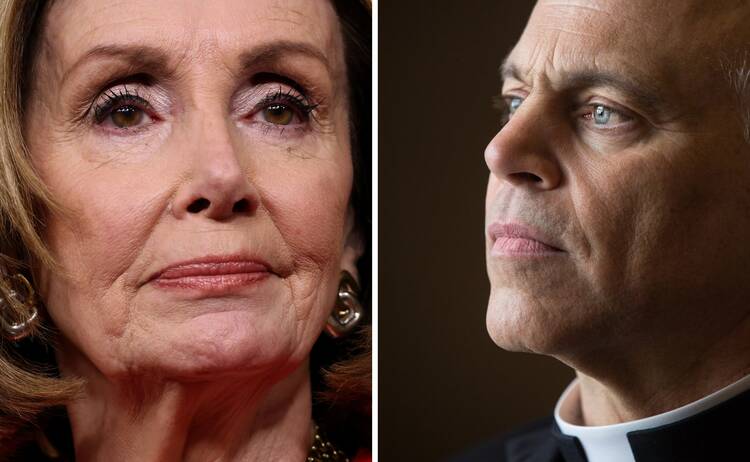 SAN FRANCISCO (CNS) -- San Francisco’s archbishop said May 17 that the “positive reaction” House Speaker Nancy Pelosi has expressed about a Vatican official’s letter to the U.S. bishops about Catholic politicians who support abortion receiving Communion “raises hope that progress can be made in this most serious matter.”

In answer to a question from an EWTN News Nightly correspondent, Pelosi, a Catholic who supports legal abortion and taxpayer funding of it, said she was “pleased with what the Vatican put out on that subject” and characterized a May 7 letter from Cardinal Luis Ladaria, prefect of the Congregation for the Doctrine of the Faith, as “basically” saying, “‘Don’t be divisive on the subject.’”

“We must never lose sight of this fact: In the last 50 years, in the United States alone, 66,000,000 babies have been murdered in their mothers’ wombs,” Archbishop Salvatore J. Cordileone said in a statement. “This is not a matter about which one can use judgment. It is a fact. 66,000,000 babies murdered in their mothers’ wombs.

“If we look around us and see what is happening in our society today, we will see that this fact once again demonstrates that violence begets violence. 66,000,000 babies murdered in their mothers’ wombs. The response to a woman in a crisis pregnancy is not violence, but love,” he added.

“We must never lose sight of this fact: In the last 50 years, in the United States alone, 66,000,000 babies have been murdered in their mothers’ wombs,” Archbishop Salvatore J. Cordileone said in a statement.

He said that “it is for this reason that I’m happy to know that Speaker Pelosi said she is pleased with the letter of Cardinal Ladaria ... regarding the issue of Catholics prominent in public life who advocate for practices that are gravely evil.”

Cardinal Ladaria said the U.S. bishops need an “extensive and serene dialogue” among themselves and between individual bishops and Catholic politicians in their dioceses who do not support the fullness of the church’s teaching to understand “the nature of their positions and their comprehension of Catholic teaching.”

He urged the U.S. bishops to proceed with caution in their discussions about formulating a national policy “to address the situation of Catholics in public office who support legislation allowing abortion, euthanasia or other moral evils.”

The letter was sent to Archbishop José H. Gomez of Los Angeles, president of the U.S. Conference of Catholic Bishops, in response to a letter from Archbishop Gomez informing the doctrinal congregation that the bishops were preparing to address the situation of Catholic politicians and “the worthiness to receive holy Communion.”

Archbishop Cordileone also referenced a letter from then-Cardinal Joseph Ratzinger sent in 2004 to then-Cardinal Theodore E. McCarrick of Washington about Catholic politicians and Communion. Archbishop Gomez had noted the Ratzinger letter in his letter to the congregation.

“(Cardinal) Ratzinger confirmed that consistently advocating for abortion and euthanasia constitutes formal cooperation in grave sin, and that bishops must dialogue with Catholics prominent in public life who do so in order to help them understand the grave evil they are helping to perpetuate and accompany them to a change of heart,” San Francisco’s archbishop said.

“He goes one to say in that letter that, if these dialogues prove to be fruitless, then, out of respect for the Catholic belief of what it means to receive Holy Communion, the bishop must declare that the individual is not be admitted to Communion,” Archbishop Cordileone added.

Writing to Archbishop Gomez, Cardinal Ladaria said Cardinal Ratzinger’s letter, which was never published by the Vatican, was in “the form of a private communication” to the bishops and advised that it should be read only in the context of the congregation’s formal “Doctrinal note on some questions regarding the participation of Catholics in political life.”

The document, dated Nov. 24, 2002, and issued Jan. 16, 2003, said Catholics in public life have a grave obligation to oppose legislation that contradicts fundamental moral principles such as the evil of abortion and euthanasia.

Other reaction to Cardinal Ladaria’s letter to Archbishop Gomez plan includes a May 18 op-ed in the National Catholic Reporter by U.S. Sen. Tim Kaine, D-Va.

“As a Catholic senator,” he wrote, “I was not surprised by the inaugural attack” on President Joe Biden, the second Catholic to be elected to the nation’s highest office. “I’ve seen this tension in my own public career, working closely with my own bishops and the conference on many items but also disagreeing over laws regarding abortion, contraception and LGBTQ equality.

“Recently, I cast a vote in favor of the Hyde Amendment, restricting any federal funding for abortions except in the limited instances of rape and incest, or to protect the mother’s life. But I did not follow the bishops’ recommendation that I vote against the entire American Rescue Plan because it lacked Hyde language.”

For the U.S. bishops, the “continued injustice of abortion” remains the “preeminent priority,” he said, but “‘preeminent’ does not mean ‘only.’

Kaine said that at Biden’s inauguration, “the die was cast for such a potential confrontation” between the bishops and Catholic politicians who support abortion and the communion issue, because of Archbishop’s Gomez statement on Inauguration Day -- which the senator characterized as an attack.

The archbishop had expressed hope the incoming administration “will work with the church and others of goodwill” to “address the complicated cultural and economic factors that are driving abortion and discouraging families.”

“If the president, with full respect for the church’s religious freedom, were to engage in this conversation, it would go a long way toward restoring the civil balance and healing our country’s needs,” Archbishop Gomez said.

For the U.S. bishops, the “continued injustice of abortion” remains the “preeminent priority,” he said, but “‘preeminent’ does not mean ‘only.’ We have deep concerns about many threats to human life and dignity in our society,” he wrote.

Kaine wrote in NCR: “Every day brings these challenges whereby Catholics in public life wrestle with our own consciences, the demands of representing diverse constituencies, and legislation often filled with real benefits for needful Americans mixed with other provisions that are not ideal. These struggles are not unique to Catholics -- everyone in public life grapples with the same questions.”

“Just as I don’t believe Catholic clergy should dictate how I do my job representing a pluralistic society, I don’t presume to suggest what church doctrine should be,” he said. “But I offer a simple suggestion: The American hierarchy should heed the words of Pope Francis and recognize Communion as an opportunity for healing rather than an occasion for judgment.”