Pope Francis: Countries with declining birthrates are ‘rich in resources but poor in hope’ 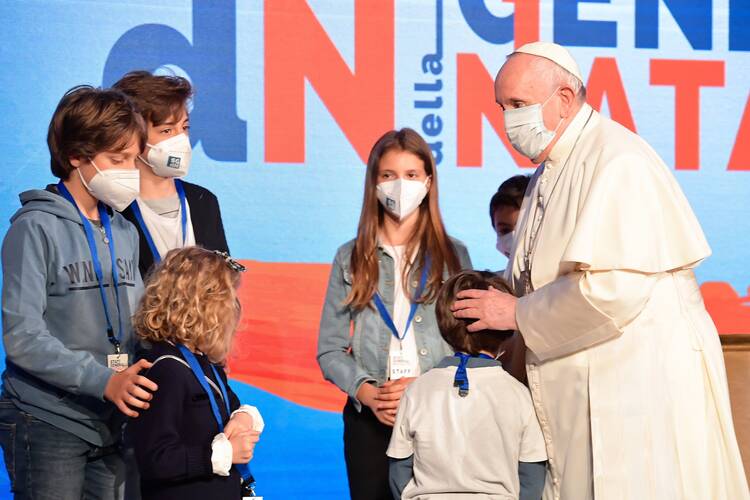 Pope Francis greets children in a Rome auditorium May 14, 2021, as he opens a meeting dedicated to Italy's declining birthrate and population. (CNS photo/Vatican Media)

ROME (CNS) — If families are not the priority of the present, there will be no future, Pope Francis said as he opened a meeting in Rome on Italy’s chronic decline in population growth.

“For the future to be good, we must, therefore, take care of families, especially young families, who are beset by worries that risk paralyzing their life plans,” the pope said at the meeting May 14.

“It is a challenge, not just for Italy, but for many countries—often rich in resources, but poor in hope,” he said.

Organizers said they hoped the meeting Pope Francis opened would be just the first to focus on the general state of Italy’s birthrate and demographics.

If families are not the priority of the present, there will be no future, Pope Francis said as he opened a meeting in Rome on Italy’s chronic decline in population growth.

The one-day meeting, sponsored by the Italian Forum of Family Associations, was held both online and at a Rome auditorium not far from St. Peter’s Square, and it was attended by several government officials, including Italian Prime Minister Mario Draghi, who also delivered opening remarks.

Gianluigi De Palo, president of the family forum, told the pope he wanted to organize a meeting that brought together as many sectors of society as possible to call for proactive and concrete action on an issue that also affects all of Europe.

Having children was once seen as “a richness,” but now it has become a luxury for some and a source of poverty for others, De Palo said.

Because sustainable development requires a healthy balance of generations, he said, “a change in mentality is urgent,” specifically in seeing policies and programs that support children and families not as a cost, but as an investment.

“It is a challenge, not just for Italy, but for many countries—often rich in resources, but poor in hope,” the pope said.

In his talk, Pope Francis praised the meeting for bringing together people from the world of business, banks, media, sports and culture as well as young people who were watching online.

Statistics say most young people want to have children, but their dreams—which should be the seeds of the nation’s revival—are being hit by a “still cold and dark demographic winter” as only half believe they will be able to have two children, he said.

Young people are faced with several worries that lead them to put their dreams on hold, such as a precarious job market and rising costs that make supporting a family increasingly more difficult, he said.

It is also sad, he said, how many working women are “discouraged from having children or have to hide their pregnancy. How is it possible that a woman should feel ashamed of the most beautiful gift that life can offer?”

It should not be the woman, but society that feels ashamed “because a society that does not welcome life stops living,” he said.

It is sad how many working women are “discouraged from having children or have to hide their pregnancy. How is it possible that a woman should feel ashamed of the most beautiful gift that life can offer?”

Good role models and values need to be promoted, he said, because often it seems the message out there is that achievement comes with money and success while children are seen as “a distraction that must not get in the way of one’s personal aspirations. This mentality is gangrene for society and makes the future unsustainable.”

The pope encouraged all government efforts for helping families’ real needs, saying, “if families are not the focus of the present, there will be no future,” adding that the country will only take off again if families can thrive first.

A sustainable balance of generations requires a social structure built on a permanent system of solidarity—not the one-off and spontaneous generosity that is important, particularly during the current crisis made worse by the pandemic, he said.

These economic struggles cannot be fixed with emergency and temporary responses but require real stability through social structures, policies, an economy and a culture that all support and promote families and new births, he said.

Young people need guarantees of stable employment and housing security so they will not be tempted to immigrate elsewhere, the pope said.

He said, “It would be wonderful to see the growth of business owners and companies that, beyond making profits, promote life, that are careful to never exploit people with unsustainable conditions and work schedules, that get to distribute a portion of profits to workers in order to contribute to that priceless development of families.”

A culture aimed at building the future “cannot be based on the individual and the mere satisfaction of one’s rights and needs. It requires a culture that cultivates a chemistry of (working) together, the beauty of gift, the value of sacrifice,” Pope Francis said.

[Read this next: Pope Francis is worried about population decline. The U.S. will need more pro-family and pro-immigrant policies to continue to grow.]