Science, faith and Dr. Fauci meet this week at the Vatican 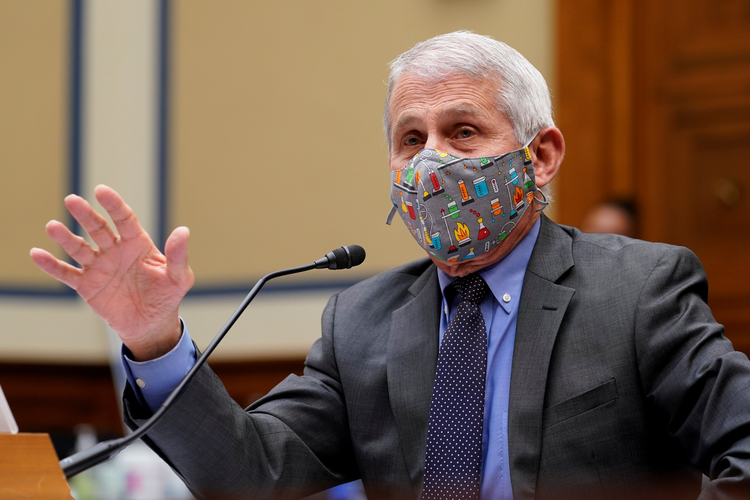 Dr. Anthony Fauci, director of the National Institute of Allergy and Infectious Diseases, speaks during a hearing on the Capitol Hill in Washington April 15, 2021. (CNS photo/Susan Walsh, pool via Reuters)

VATICAN CITY (CNS) — Much is still unknown about the 2019 novel coronavirus and why it can kill so many people and yet also can infect many more without causing any symptoms, Dr. Anthony Fauci, the United States’ top infectious disease expert, told a Vatican conference.

“It is a wily opponent,” he said May 6, the first day of a three-day virtual conference featuring more than 100 speakers presenting the latest advancements in medicine and innovative ways to deliver health care as well as discussing their theological, ethical and cultural impacts. Pope Francis was scheduled to close the conference with an online address May 8.

Titled, “Exploring the Mind, Body and Soul—Unite to Prevent and Unite to Cure,” it was the fifth health care conference organized jointly by the Pontifical Council for Culture, its Science and Faith (STOQ) Foundation and the New York-based Cura Foundation and Stem for Life Foundation, which seeks to promote stem-cell therapy and research.

Dr. Fauci, director of the U.S. National Institute of Allergy and Infectious Diseases, was one of the first speakers, answering questions posed by Dr. Sanjay Gupta, a neurosurgeon and medical correspondent for CNN.

Asked how much was left to learn about the novel coronavirus associated with COVID-19, Dr. Fauci said scientists still must discover more about what the virus can do and how it causes disease.

Asked how much was left to learn about the novel coronavirus associated with COVID-19, Dr. Fauci said scientists still must discover more about what the virus can do and how it causes disease.

“I want to find out how could it possibly be that the same virus that’s killed 570,000 people in this country is a virus in which more than half the people don’t ever get any symptoms,” he said.

That many who are asymptomatic are young and healthy is “not an adequate explanation,” he said. “There is something there, something that we don’t know about.”

“The other thing that we don’t know about,” he said, is “how extensive is the ability of this virus, if you don’t really suppress it completely, to develop new variants.”

“Every single week, Sanjay, that goes by, we get hit with another challenge,” he said, calling the virus, “a wily opponent.”

“I want to find out how could it possibly be that the same virus that’s killed 570,000 people in this country is a virus in which more than half the people don’t ever get any symptoms.”

The coronavirus is a living microorganism that quickly adapts itself in order to survive, he said. “That’s the reason why we are seeing the evolution of these variants.”

To make progress in understanding the coronavirus, scientists must be “flexible, open-minded and humble to know that even though you have 40 years of experience that when you are dealing with something that is really in the realm of the unknown, you’ve got to expect the unexpected,” he said.

What made the SARS-CoV-2 so unique, Dr. Fauci said, was that all previously known respiratory viruses tended to be transmitted by people who are symptomatic.

The reason that is important is it impacts health officials’ ability to identify and contact trace those who are infected, and “it impacts the profound need to wear masks,” he added.

The coronavirus is a living microorganism that quickly adapts itself in order to survive, he said. “That’s the reason why we are seeing the evolution of these variants.”

“When you say, ‘Well, I don’t worry. If I don’t feel sick, why should I wear a mask?’ Now we know that you could be spreading the virus,” he said.

Highlighting the huge explosion of cases and deaths in India, Dr. Gupta asked how worried countries should be about what is happening in other parts of the world.

“I’ve seen this with HIV in a less dramatic way where individual countries say, ‘It will never come here. We don’t have the conditions for that to happen,’” he said.

He said, “My heart sank” when he saw televised images of thousands of people gathering in mid-April for a religious festival at the Ganges River. “I said, ‘Oh my goodness, that is going to turn out to be something not good’ and that’s exactly what happened.”

Asked about overcoming vaccine hesitancy and giving people the evidence and facts that vaccination is “a good thing to do” for protecting themselves and those they come in contact with, Dr. Fauci said, “You’ve got to connect them with people they trust.”

“I’ve seen this with HIV in a less dramatic way where individual countries say, ‘It will never come here. We don’t have the conditions for that to happen,’” he said.

“You’ve got to match the messenger with the audience, and I think if you do that, you’re going to overcome a lot of the hesitancy,” he said, adding that if “you have someone who is a deeply religious person who will listen to their clergy, that’s different than me with a suit going into an area telling people to do something.”

Cardinal Gianfranco Ravasi, president of the Pontifical Council for Culture, told the Vatican newspaper May 6 that it was important the conference had invited such a large and diverse group of people from every sector of society.

“It is interesting that they wanted to bring into dialogue—to discuss—(people with) totally different experiences, not only doctors and scientists, but also scholars in ethics, religious leaders, advocates of patients’ rights, politicians, philanthropists, various opinion leaders,” he said.

The free market alone will not vaccinate the world.
Mary Beth Powers

Dialogue and discussion are the key, he said, even with people who have different opinions and who are not experts in the health care field. For example, other speakers included former NFL wide receiver Brandon Marshall, Joe Perry of the band Aerosmith, and former model Cindy Crawford.

“At first glance they can seem like outsiders,” but, he said, it is important to include all voices to show how “it is necessary to go back against pigeonholing, division and the separation that happens between different disciplines, and toward dialogue and encounter because a person’s wellbeing is not just about health.”

In his opening remarks at the conference, the cardinal said the invitations, which had caused controversy because some of the speakers do not uphold church teaching, was not meant to “deny nor affirm one aspect or the other,” but to “bring them together and put them into dialogue with each other.”

The event will contribute greatly to the importance of dialogue which is at the foundation of what the Vatican council does as part of its mission, he said.