The free market alone will not vaccinate the world. 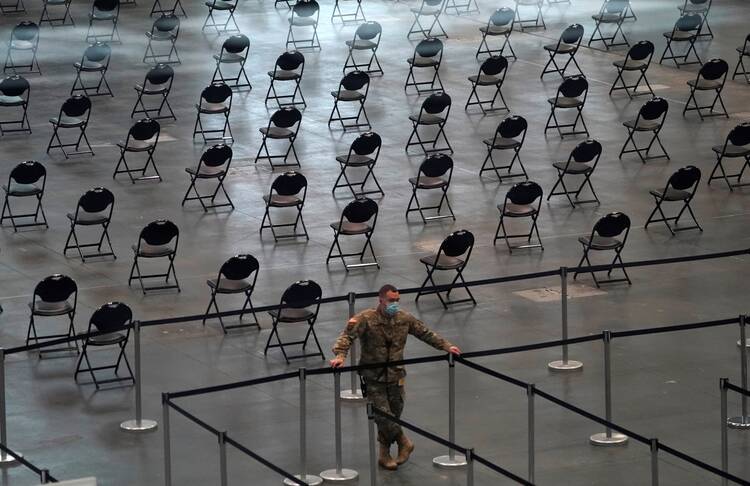 A National Guard soldier in New York City is seen April 6, 2021, at the Jacob K. Javits Convention Center, now open as a vaccination center, as people stand in line to get vaccinated against COVID-19. (CNS photo/Timothy A. Clary, Pool via Reuters)

The Catholic Medical Mission Board recently joined a coalition of over 40 Catholic organizations to promote vaccine equity as an “Act of Charity and Solidarity.” The Catholic Cares Coalition is calling for the equitable distribution of Covid-19 vaccines among nations and among those Americans who have been hard to reach, including rural populations, immigrants, and inner-city and BIPOC communities. It is echoing the message of Pope Francis in his remarks at the World Bank and International Monetary Fund spring meeting on April 7, when he called for “justly financed vaccine solidarity,” adding that “we cannot allow the law of the marketplace to take precedence over the law of love and the health of all.”

The reality of vaccine delivery to date is anything but equitable, with higher-income countries pursuing advance-purchasing arrangements for candidate vaccines with a speed that rivaled the hoarding of paper goods by households early in the pandemic—but with more dire consequences. According to the Duke Global Health Innovation Center, Canada led the pack by ordering enough doses to vaccinate 434 percent of its population. The United Kingdom was not far behind, with enough doses for 364 percent of its people, and the European Union and the United States captured enough doses to vaccinate 233 percent and 200 percent of their populations, respectively. (It is worth noting, however, that all these vaccines might not all be effective or approved for use, so countries were hedging their bets early in the purchasing frenzy.)

Canada ordered enough doses to vaccinate 434 percent of its population.

While having the resources to capture a significant share of the market was key, that was not the only way to move to the front of the line. Governments like that of the United States that invested in vaccine research were able to reserve dose purchases from those manufacturers in which they were investing. Other countries negotiated manufacturing deals, which helped India and Brazil to pre-order doses. And Peru, which has borne a heavy burden of cases and deaths, offered to serve as a clinical trials site to get closer to the front of the line.

These strategies help explain why, as of late April, 6.2 billion of the current 8.9 billion vaccine doses purchased globally have been earmarked for high- and upper-middle-income countries. Just 1.1 billion doses have been purchased by Covax, an international initiative to help secure doses for 92 low- and middle-income countries. Add the direct purchases of 1.5 billion doses by the same nations, and it is still clear that only a small fraction of the population in these countries could be reached—far below what it would take to slow the spread and thwart the development of new variants.

6.2 billion of the current 8.9 billion vaccine doses purchased globally have been earmarked for high- and upper-middle-income countries.

Still, it is heartening that public calls for vaccine sharing, including the work of Catholic Cares, helped persuade the Biden administration to promise 60 million doses of the AstraZeneca vaccine to India and other countries in desperate need (though the AstraZeneca vaccine has not yet been approved by the Food and Drug Administration and only 10 million doses are available now due to concerns about manufacturing practices at one key plant). And there is public support for vaccine sharing: One survey of residents of the United States and six other high-income countries found that between 48 percent and 56 percent supported some vaccine donations, with 70 percent of those supporters agreeing that at least 10 percent of their country’s doses could be donated.

Even if the first goal of the United States is to achieve herd immunity, we have passed the point where inventory is a concern. Given that the United States committed to purchase vaccines that would cover twice our own population, and recognizing that some Americans are hesitant to get the vaccine or determined not to get it, we could shift more resources sooner to slow the spread of Covid in parts of Asia, Africa and Latin America. Current estimates suggest that, at best, 20 percent of the population in these areas might be reached by the end of 2021—nowhere near levels needed to approach herd immunity and prevent the emergence of new variants that threaten the entire world.

It is time to persuade the wealthier countries to release some of their existing vaccine supplies and future orders through country-level agreements (or to Covax) to slow the spread and the development of Covid variants in countries that are just beginning to vaccinate. If the United States, Canada, the United Kingdom and the European Union—all of which have a portion of their population who are vaccine-hesitant—could release just 20 percent of their surplus purchases, that would put hundreds of millions more doses of existing and new vaccines into the pipeline for low- and middle-income countries.

The faster we can get the world vaccinated, the greater chance we have to reduce the risks of the Covid virus mutating into new variants.

The faster we can get the world vaccinated, the greater chance we have to reduce the risks of the Covid virus mutating into new variants that may eventually evade the current vaccines. In addition, we need to create technology transfer, licensing and manufacturing agreements that will allow for increased capacity for manufacturing vaccine supplies globally, both to complete Covid vaccination and to be more prepared for the next pandemic.

We cannot tame the pandemic by waiting for market forces to dictate where vaccination coverage levels can climb. Whether as an act of solidarity and charity or as an act of self-protection, initiating and accelerating coverage in those countries that have not yet vaccinated even 1 percent of their populations should be a priority for the United States.

Editor's note: Matt Malone, S.J., the editor in chief of America Media, serves on the board of directors of the Catholic Medical Mission Board. 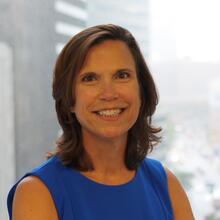 Mary Beth Powers is the chief executive officer of the Catholic Medical Mission Board.

@MaryBeth_CMMB
Show Comments ()
Join the conversation: Login or create an account
Before you can comment, you need to update your profile to include your first and last name, as required in our comments policy. Then reload this page and you'll be set up for commenting. Update your profile