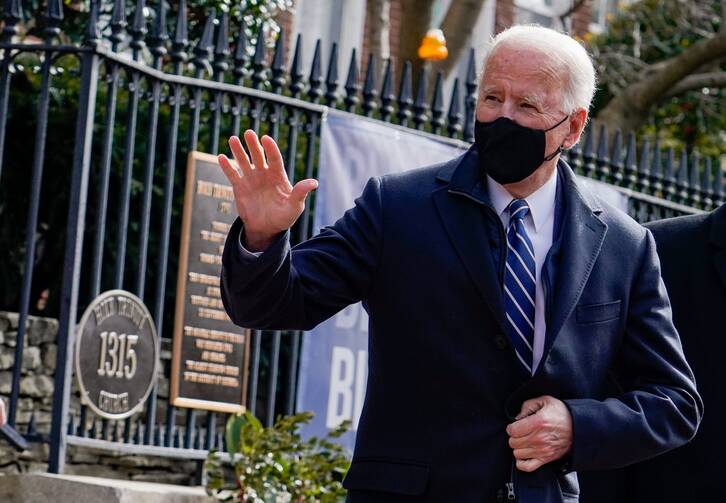 President Joseph R. Biden Jr. is a cradle Catholic whose positions on immigration, the death penalty, economic justice and environmental stewardship are aligned with policy recommendations of the U.S. bishops and other faith leaders. Mr. Biden has demonstrated his commitment to religious freedom by revoking his predecessor’s so-called “Muslim ban” on immigration and widening the path for refugees, including religious refugees, to find sanctuary in the United States.

Nevertheless, Mr. Biden’s policies on “abortion, contraception, marriage and gender,” noted in that order by Archbishop José H. Gomez of Los Angeles, president of the U. S. Conference of Catholic Bishops, are disturbing to many Catholic leaders. In his statement on Mr. Biden’s inauguration, the archbishop denounced the president’s decision to rescind the “Mexico City policy,” an executive branch requirement that foreign nongovernmental organizations receiving U.S. aid certify that they do not “perform or actively promote abortion as a method of family planning.”

Archbishop Gomez used the occasion of Mr. Biden’s inauguration to express “deep concern” for “the liberty of the Church and the freedom of believers to live according to their consciences.” As a candidate, Mr. Biden promoted a plan to “safeguard our nation’s religious communities” and “restore a national culture of inclusiveness that encourages individuals of all faiths to celebrate their beliefs openly and without fear of harm or reprisal.”

Mr. Biden’s policies on “abortion, contraception, marriage and gender” are disturbing to many Catholic leaders.

As president, Mr. Biden has announced his respect for “our cherished guarantees of church-state separation and freedom for people of all faiths and none.” So why is Archbishop Gomez concerned about religious freedom under President Biden?

What is religious freedom?
Mr. Biden has pledged to protect the traditional concept of religious freedom as expressed in the Free Exercise Clause of the U.S. Constitution, described in Supreme Court rulings from 1990 and 1993 as “[T]he right to believe and profess whatever religious doctrine one desires” and to be “free from discriminatory treatment.” But Archbishop Gomez espouses a much broader interpretation that permits believers not only to worship as they choose but to “live [all aspects of their lives] according to their consciences.” This assertion of religious rights goes far beyond what is promised by the First Amendment.

As Justice Felix Frankfurter wrote in 1940:

Conscientious scruples have not, in the course of the long struggle for religious toleration, relieved the individual from obedience to a general law not aimed at the promotion or restriction of religious beliefs. The mere possession of religious convictions which contradict the relevant concerns of a political society does not relieve the citizen from the discharge of political responsibilities.

Under controlling Free Exercise precedent, religious practitioners are subject to all “generally applicable” “valid and neutral” government regulations as long as the government is not motivated by anti-religious animus. The Supreme Court also has read a “ministerial exception” into the application of federal employment laws. This exception protects religious employers from employment law claims brought by employees who perform “religious functions” like leading students in prayer.

In 1993, Congress determined that religious practitioners needed greater protection from government interference, so it passed the Religious Freedom Restoration Act. The R.F.R.A. subjects federal laws that “substantially burden religious exercise” to a strict scrutiny standard, which means they must be “narrowly tailored” to meet a “compelling government interest.”

Strict scrutiny is a litigator’s dream and a regulator’s nightmare. As Justice Antonin Scalia opined in 1990, strict scrutiny creates “an extraordinary right to ignore generally applicable laws” and cannot be “limited to situations in which the conduct prohibited is ‘central’ to the individual’s religion since that would enmesh judges in an impermissible inquiry into the centrality of particular beliefs or practices to a faith.”

Archbishop Gomez espouses a broader interpretation of religious freedom that permits believers not only to worship as they choose but to “live [all aspects of their lives] according to their consciences.”

Health Care and L.G.B.T. Rights
The 2010 passage of the Affordable Care Act spawned numerous lawsuits that greatly expanded religious rights. In Burwell v. Hobby Lobby (2014), the Supreme Court applied the R.F.R.A.’s religious protection to religiously motivated, closely held corporations; and, in Zubik v. Burwell (2016), it gave credence to the argument that the mere filing of a form may constitute a “substantial burden” on religious rights. In Little Sisters of the Poor Saints Peter and Paul Home v. Pennsylvania (2020), the court upheld, but did not require, President Donald J. Trump’s expansion of religious exemptions beyond faith to “conscience based” objections.

The entire A.C.A. may be struck down by a pending Supreme Court decision, but should the law stand, Mr. Biden will have the challenge of drafting a new rule that grants female employees the health insurance, including access to contraception, required by the A.C.A. while meeting the formidable demands of the Little Sisters of the Poor.

The ballooning of religious liberty occasioned by successful challenges to the contraceptive mandate of the A.C.A. thrilled religious rights advocates, but they may regret having pushed so far. The religious liberty pendulum, having swung far from the original confines of the Free Exercise Clause, may be swinging back to the center.

The R.F.R.A. was enacted with the approval of 97 senators, including Joseph R. Biden Jr. of Delaware. Since then, the R.F.R.A.’s intended narrow exemption for religious observance has become a wide passage through which all conscientious objectors, including those engaged in secular activities like running arts-and-crafts businesses, may pass. Consequently, President Biden now supports passage of the Equality Act, which would supersede the R.F.R.A. and leave religious objections to L.G.B.T. anti-discrimination laws to be judged by Free Exercise Clause standards.

The Fairness for All Act is opposed by both the U.S.C.C.B and L.G.B.T. activists, which means it is either dead in the water or the perfect compromise. The Supreme Court’s decision in Bostock v. Clayton County (2020), which acknowledged that federal sex discrimination laws apply to gay and transgender employees, may affect legislative negotiations.

Whatever the outcome of these legislative initiatives, Mr. Biden’s conflict with religious groups may be eased when the court decides Fulton v. City of Philadelphia, a case that challenges the denial of foster care contracts to agencies that decline to place children with same-sex couples because of religious objections. Should the court rule that the Free Exercise Clause includes the right to deny services to same-sex couples, Mr. Biden would be obligated to honor that right.

Mr. Biden has announced his respect for “our cherished guarantees of church-state separation and freedom for people of all faiths and none.” So why is Archbishop Gomez concerned about religious freedom?

Covid-19 controversies
One of the many executive orders signed by Mr. Biden on his first day in office required the implementation of mask wearing on federal property, at transportation hubs and on public conveyances (planes, trains and buses). While mask wearing has been promoted as a sign of Christian love, there are religious practitioners who object to mask mandates. Religious objections to Mr. Biden’s mask order are unlikely to succeed even under the R.F.R.A.’s strict scrutiny standard, as the burden of wearing masks in public places is low and the compelling nature of this lifesaving public health initiative is high.

A federal vaccination mandate is unlikely until Covid-19 vaccines are readily available and receive full Food and Drug Administration approval. To date, the F.D.A. has only granted emergency use authorization for three Covid-19 vaccines. Mandating use of a drug that is not F.D.A.-approved may be prohibited by the very law that created the emergency use authorization.

Consequently, even the U.S. military is not currently requiring soldiers to be vaccinated. Vaccination is physically intrusive and, for some, a religious burden, but a properly crafted federal vaccination requirement could overcome strict scrutiny if, for example, it did not force believers to be injected with serum produced by or tested on genetic material derived from fetal cell lines.

No president seeks controversy with religious leaders, particularly with leaders of one’s own faith. Mr. Biden began and will end his presidency in substantial agreement with Catholic leaders on, returning to Archbishop Gomez’s statement, “the death penalty, immigration, racism, poverty, care for the environment, criminal justice reform, economic development and international peace” and disagreement on abortion and L.G.B.T. rights.

But presidential powers are limited. If Mr. Biden wants his presidency to have a lasting impact on religious freedom, he and his fellow Democrats must craft legislation acceptable to Republican senators. The White House has not yet commented on possible revisions to the Equality Act, but the response should forecast Mr. Biden’s legacy on religious freedom.