Walter Mondale was a decent man who knew how to laugh at himself. We need more politicians like him. 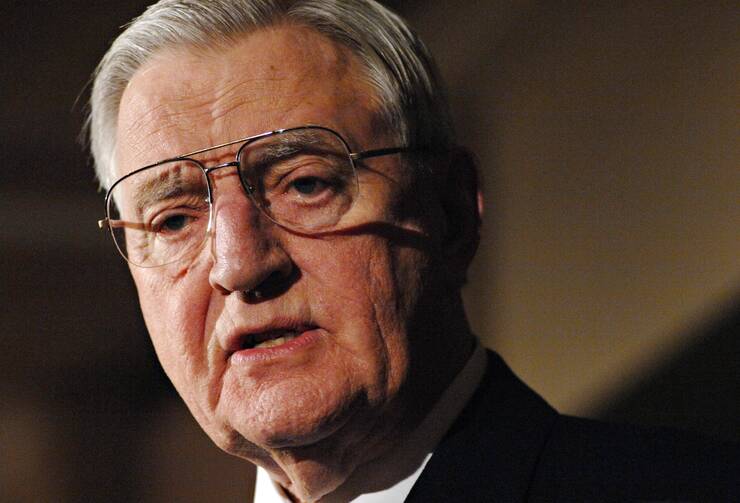 When former Vice President of the United States Walter F. Mondale of Minnesota died on Monday, April 19 at the age of 93, we lost more than just a former statesman and politician. We also marked the passing of a political ethos that seemingly dies with him. Like his mentor, Hubert H. Humphrey—likewise a U.S. senator and vice president—he was the embodiment of a kind of decency and civility that has all but disappeared from the American political scene. While Mr. Mondale was a passionate believer in his politics, he never became a cut-throat partisan like so many—in both parties—who came after him.

Walter Mondale was from a generation that believed that politics was a public service, not a platform for self-aggrandizement. Once upon a time, such a belief was a bipartisan one: Like other politicians of his time, such as Hubert Humphrey, George McGovern, Paul Douglas, Birch Bayh, Henry Cabot Lodge Jr., Everett Dirksen, Margaret Chase Smith, Jacob Javits and Nelson Rockefeller, Mr. Mondale viewed government as a vehicle to improve the lot of the disadvantaged and those who suffered discrimination. For such politicians, power was “an engine for good,” and they conducted their public lives accordingly.

Mr. Mondale is often remembered by his fellow Americans—as well as by history—for his monumental 49-state loss to President Ronald Reagan in the 1984 presidential campaign, despite his historic selection of a relatively unknown congresswoman from Queens, N.Y., named Geraldine Ferraro to be his running mate. Mr. Mondale never let that loss define him; he knew who he was. He was gracious in his concession speech, but he was also self-aware, a trait not always common in politicians.

Walter Mondale was from a generation that believed that politics was a public service, not a platform for self-aggrandizement.

During a press conference after his historic loss, he freely admitted that one of the reasons he did not win was the fact he was an “old school” politician: He never could get the hang of campaigning by TV, for he was a handshake, slap-on-the back, cigar-smoking type of politician. A personable man most of the time, he stiffened in front of the cameras. To make his point, he jostled the bank of microphones in front of him to illustrate his unease with the electronic age of politicking.

Though charisma was not his strong suit, his sense of humor showed in two 1984 presidential debates. The first time was in the Democratic primaries, when he faced off against Gary Hart, John Glenn, George McGovern, Jesse Jackson and others. Responding to a statement by Mr. Hart that he considered less than substantive, Mr. Mondale said he was reminded of the old lady in the famous Wendy’s hamburger commercial: “Where’s the beef?” That unexpected quip from Mondale elicited laughter, even from Mr. Hart, the target of the well-placed barb.

While Mr. Mondale could dish it out, he could also accept it when he himself was the target. Leading up to the second debate with Ronald Reagan in 1984, pundits expected Mondale to have the advantage over President Reagan because of his strong command of issues. After Mr. Mondale had expounded on his knowledge and experience, the moderator raised the “age issue” (Reagan was 73 and Mondale was 56). It was the cue for this line from President Reagan, with that typical aw-shucks grin: “I want you to know that also I will not make age an issue of this campaign. I am not going to exploit, for political purposes, my opponent’s youth and inexperience.” Even Mr. Mondale threw his head back and laughed, knowing full well that he had just about lost whatever lead he might have had.

From 1977 to 1981, he served as vice president in the Carter administration and reshaped the office to what we know it as today. Mr. Mondale knew the lessons of previous vice presidents, especially of his mentor, Hubert Humphrey, and how they were disparaged and ignored. When Mr. Carter selected him to be on the 1976 Democratic ticket, Mr. Mondale accepted on the condition that he not just be “window dressing.” He went on to make his vice presidency a vehicle for influence, concretely symbolized by an actual office just steps away from the Oval Office in the White House itself.

His legacy still stands: competence, leavened by decency, with a healthy dose of laughter.