Why Democrats need to avoid a condescending convention 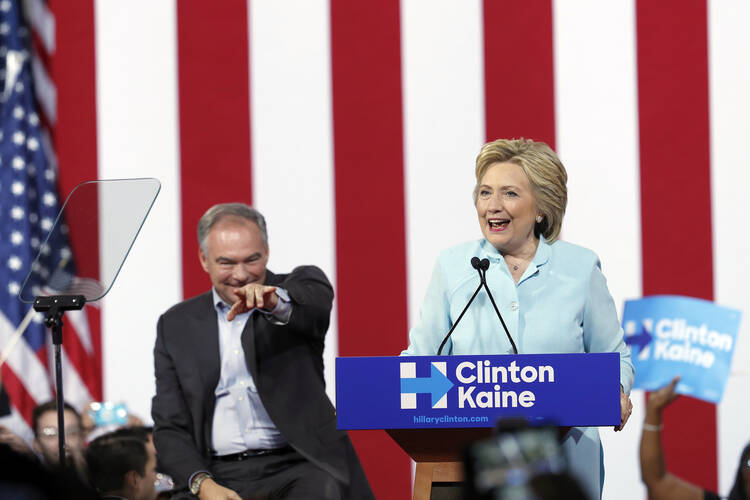 It is safe to say this week’s Democratic National Convention will not feature as much anger (“lock her up!”) as the Republicans did, but it probably will not duplicate the happy vibe of the 1992 convention that nominated Bill Clinton and revived such pop songs as Fleetwood Mac’s “Don’t Stop” and Paul Simon’s “You Can Call Me Al.” When polls consistently show that a large majority of the voters think the country is on the “wrong track,” the incumbent party can’t get away with saying things are too rosy.

On Friday, President Barack Obama had a good 30-second response to Donald J. Trump’s unusually long, humorless and apocalyptic acceptance speech at the Republican convention. “This idea that America is somehow on the verge of collapse, this vision of violence and chaos everywhere, doesn't really jibe with the experience of most people," Mr. Obama told journalists. That message is not enough to fill four nights of a convention, especially for a party that traditionally argues that the government has an obligation to improve lives even in the absence of utter collapse and chaos. “Things aren’t that bad” has never been a good message for increasing Democratic turnout.

Last week, FiveThirtyEight’s Nate Silver wrote that Democratic nominee Hillary Clinton faces a choice in how to respond to Trump. She could simply look back to the last true Democratic landslide, 1964 and “seek to portray Trump as unfit for office, as Lyndon Baines Johnson did to Barry Goldwater.” This is an obvious but limited strategy in that the United States is much more polarized than it was a half-century ago, with a much smaller slice of the electorate going back and forth between parties based on the personal attributes of the nominees. Another model, Mr. Silver writes, is the 2012 election (the first time since World War II that the Democrats won a majority of the vote for a second consecutive election), which calls for “a more vigorous defense of Obama’s accomplishments and of the condition of the country overall, instead of buying into Trump’s premise that things were going badly.”

Ms. Clinton’s selection of Senator Tim Kaine of Virginia as her running mate suggests that she is not buying into the Trumpian view of America under siege. (For a primer on the vice-presidential pick, see “Sen. Tim Kaine Seeks to Balance Catholic Faith with Democratic Politics.”)

Mr. Kaine is a solid progressive, and conservative media outlets are correct to push back against the idea that he’s a “centrist” comparable to past Democratic ticket-balancers like Lloyd Bentsen or Joe Lieberman, but he’s not associated with crisis rhetoric like Bernie Sanders or Elizabeth Warren. Like Clinton herself, he seems more inclined toward incrementalism than revolution, even if his ultimate goals are informed by his background in Catholic social teaching. (See “Tim Kaine Has a Refreshing (and Bipartisan) Approach to Financial Reform.”)

Ms. Clinton, who makes her acceptance speech on Thursday, continues to be the favorite to win in November, based on demographics (i.e., an electorate that gets more racially diverse with every election and is a lot less white than the country that responded to Richard Nixon’s “law and order” strategy in 1968) and an Electoral College that’s been mostly frozen since 1992.

The RealClearPolitics average of polls gave her only a 1.9-point lead on Sunday, down from almost 12 points in late March, but that’s still better than Barack Obama’s lead of about a single point over Mitt Romney throughout July 2012. Also on Sunday, Mr. Silver’s FiveThirtyEight website gave Clinton a 58.3 percent chance of winning the presidency, down from 80.3 percent at the end of June. (Update: by Monday morning, FiveThirtyEight had Ms. Clinton's chance of winning down to 53.7 percent.)

As horrified as the Democrats are by Mr. Trump, he may the one to thank if Ms. Clinton finally makes it to the White House. She may well have lost to Marco Rubio, John Kasich, Jeb Bush or Mitt Romney, who don’t have Trump’s liabilities among college-educated and Hispanic voters. (Ted Cruz is an iffier proposition.) Ms. Clinton is 2016’s answer to Walter Mondale—a diligent and dogged public official with decades of service to the Democratic Party. After briefly running for the 1976 presidential nomination, Mondale ended up as vice-president under a less-experienced Jimmy Carter; similarly, Ms. Clinton served as secretary of state to a less-experienced President Obama. Both were due presidential nominations, at least in the eyes of Democratic loyalists, and both faced unexpectedly strong primary challenges from candidates who did especially well with independent voters (Gary Hart in 1984, Bernie Sanders in 2016).

Mr. Mondale was obviously not the most electable among possible Democratic choices (hence Mr. Hart’s “new generation of leadership” slogan), and the most memorable moment of the 1984 convention was when he played to the house and promised to raise taxes. Ms. Clinton seems far shrewder than to lean so heavily into the stereotype of a liberal Democrat. Still, it’s not clear what she can to do reverse her unpopularity among the general electorate. She may benefit from a perception that the Republicans went overboard in portraying her as the biggest threat to the nation since the influenza epidemic of 1918. But it may not be easy to counter the subtler jabs from last week, including Mike Pence calling her “secretary of the status quo.”

If the challenge for Mr. Trump was to convince voters he’s knowledgeable enough to be president (or that knowledge doesn’t matter), the Democrats need to avoid an air of condescension—the attitude that Ms. Clinton is so obviously the better candidate that Democrats should not have to prove it to voters, and that the idea of Mr. Trump as president is so absurd it should not be dignified with a response. It will be understandable if many convention speakers follow the example of Supreme Court Justice Ruth Bader Ginsburg, who played to the choir a few weeks ago by scoffing, “I can’t imagine what the country would be with Donald Trump as our president,” but the Democrats may want to devote some prime time addressing voters who are disenchanted with both parties.

With his open appeals to the kind of authoritarianism the United States has avoided in darker times, Mr. Trump has given the Democrats the opportunity to present itself as the reasonable and safe choice. (“I alone” can fix things, he said in his speech at a convention that barely acknowledged the existence of Congress, even one controlled by Republicans.) It will become apparent soon enough whether that is enough to win in what has become an unnervingly dramatic year.

Robert David Sullivan
RobertDSullivan
Show Comments (
3
)
Comments are automatically closed two weeks after an article's initial publication. See our comments policy for more.
ed gleason
6 years 2 months ago
Sander's ego driven slow slow endorsement is sour grapes and caused a Trump bump.. Go home and fade , Bernie.
William Rydberg
6 years 2 months ago
Much like the Major Media Outlets, America Magazine seems to treat certain persons that hold more than a few practical positions that vary significantly with Ordinary Magisterial Catholic teaching with kid gloves. Refer Mr Senator Kaine (VP Nominee) and Ms Ruth Bader Ginzberg (Supreme Court Judge)... Could America be "crafting" opinion, that is endemic to Ordinary Magisterial teaching? Only the Editor in Chief can say for sure. Just wondering...
L J
6 years 2 months ago
"It is safe to say this week’s Democratic National Convention will not feature as much anger (“lock her up!”) as the Republicans did..." What a difference a day makes. When this article was published Monday morning, chaos errupted at the DNC and it has gotten worse since then. I loathe Trump and fear his supporters. However the DNC vitriole and nuclear warfare make the RNC convention look like a parish council meeting. The animus we have seen from ALL news media sources is devastating to the Catholic success story of America. No Bishop or Catholic news media can afford to be smug nor complacent with their ministry. America Editors: might you sin less against charity by abstaining from being partisan? Just a tad?