Biden wants to go big on infrastructure. Catholic leaders are hopeful it will help the poor 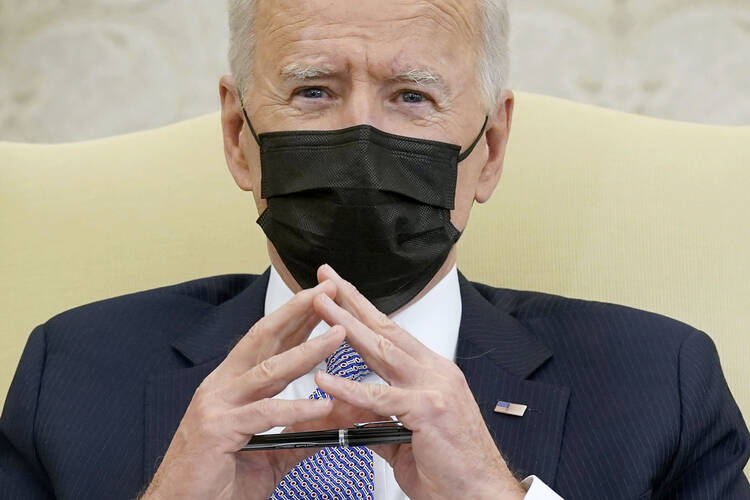 President Joe Biden participates virtually in the CEO Summit on Semiconductor and Supply Chain Resilience in the Roosevelt Room of the White House, Monday, April 12, 2021, in Washington. (AP Photo/Patrick Semansky)

At first glance, a White House proposal aimed at improving infrastructure and creating jobs might not seem like a natural topic of discussion for Catholic leaders. But the American Jobs Plan, a set of proposals that includes spending about $2.3 trillion to improve traditional infrastructure, plus expand access to broadband internet, install lead-free water pipes and bolster homecare nursing, has some Catholic theologians and activists hoping pressing societal issues might soon be addressed.

In a speech unveiling the plan last month, President Joe Biden called the proposal “a once-in-a-generation investment in America, unlike anything we’ve seen or done since we built the interstate highway system and the space race decades ago.”

Mr. Biden has said he is willing to negotiate with lawmakers from both parties about what will be included in any eventual legislation.

At first glance, a White House proposal aimed at improving infrastructure and creating jobs might not seem like a natural topic of discussion for Catholic leaders.

Josh Dickson, a White House senior adviser on faith engagement, told America that the Biden administration is also engaging faith leaders for input on the plan, which he called “an intersectional piece of legislation that cuts across a number of different priorities that are important to faith communities.” He added that the proposal’s aim is “caring for the most vulnerable, and ensuring that we’re taking the common good into consideration in all that we do.”

Part of the plan calls for upgrades to the nation’s water system. According to the White House, six million to 10 million U.S. homes receive water through lead pipes and service lines. Another roughly 1.5 million Americans lack any connections to drinking water or sewers, Bloomberg CityLab reported in 2019, with Native American, Black and Hispanic communities bearing a disproportionate burden of inaccessibility.

The administration’s plan includes $111 billion to replace all lead pipes and service lines and to enhance water treatment facilities that would expand access to clean drinking water.

“Water is a life issue and as Pope Francis says in ‘Laudato Si,’’ access to fresh water is a fundamental human right,” said Christiana Zenner, a theologian at Fordham University and author of Just Water: Theology, Ethics, and Fresh WaterCrises. “In fact, it’s essentially the basis for the achievement of all other rights.”

“Water is a life issue and as Pope Francis says in ‘Laudato Si,’’ access to fresh water is a fundamental human right,” said Christiana Zenner.

Pope Francis has spoken out about the need to ensure access to clean water many times during his pontificate, including last month, when he called water “the source of life and health” in a speech marking World Water Day.

Catholic groups in the United States, including many communities of Catholic sisters, have for years highlighted access to clean water as a social justice issue. In 2008, the Sisters of the Holy Names of Jesus and Mary called for universal access to clean water, and in 2017, the Minnesota Catholic Conference urged Catholics to pressure lawmakers to ensure the protection of vulnerable water sources.

Dr. Zenner said Americans have largely taken for granted that they can turn on the tap and fill a glass of drinking water, a reality that has become endangered in recent years, perhaps most notably in the water crisis affecting residents in Flint, Mich. Reliable access to clean drinking water will require substantial investment.

“Water is a public good, and it should be regarded as a public trust. It has been too frequently categorized as a commodity or an individual responsibility,” she said. “Yes, infrastructure packages, including this bill, are expensive propositions, but they are essential for life.”

“Yes, infrastructure packages, including this bill, are expensive propositions, but they are essential for life.”

Jose Aguto, the associate director of the Catholic Climate Covenant, said he would like to see a proposal focused on climate change that gains bipartisan support. But he called the initiatives being discussed as part of the infrastructure plan “a step in the right direction.” More will have to be done, he added, including taxing carbon emissions, in order to combat threats to the environment.

“Given the scale of the climate change crisis, we know that there has to be unprecedented action across all sectors, and especially among national governments, to dramatically bring down our greenhouse gas emissions in order to fend off climate catastrophe,” he said.

Advocates for better homecare services reacted positively to plans to invest $400 billion to expand access, as well as raising wages to attract more workers. According to Kaiser Health News, more than one million additional workers will be needed to assist people confront aging and disability by 2030, and finding those workers could prove to be a challenge given the strenuous work and low pay common to the field.

“The whole field of long-term care, which includes nursing homes, assisted living, care that’s given at home, is in many ways in dire need of infrastructure investment,” Julie Trochio, a senior director at the Catholic Health Association, told America. She said Catholic teaching supports expanding access to more compassionate care for the most vulnerable, pointing to a document published in February by the Pontifical Academy for Life that calls for thinking about new ways to care for the elderly, following the high number of deaths from Covid in nursing homes.

She said the pandemic also showed the need to offer better services to older people, especially those facing financial challenges, though she hopes that any major investment will include support for middle-class families trying to care for loved ones at home. Support for workers will be key, she said, in improving this infrastructure.

“We need a workforce infrastructure,” Ms. Trochio said. “Nursing homes and homecare agencies are very dependent on really hard-working people, mostly women, and many of them non-American-born. We need to be able to increase their wages, and we have to make this a better job if we’re going to have better care.”

The Biden proposal includes hundreds of billions of dollars to invest in roads, bridges, broadband and affordable housing.

According to the White House, the plan will “bring affordable, reliable, high-speed broadband to every American, including the more than 35 percent of rural Americans who lack access to broadband at minimally acceptable speeds.”

Though he recognizes concerns about passing on debt to future generations, Mr. Ennis said the proposal would address pressing needs in many rural communities, including on tribal lands.

“There’s a long history [in the] Catholic tradition of caring for the marginalized and for those who have fewer resources, and this would be an investment in those resources,” he said. “We have a lot of men and women who are living in poverty in rural communities, which isn’t really known.”

As for housing, last month, Catholic Charities USA and the Catholic Health Association signed a letter urging the Biden administration to include affordable housing as infrastructure priorities.

“In any future infrastructure or recovery package, we will have the rare opportunity to advance bold, transformative housing solutions that are urgently needed today and will pay dividends for years to come,” the letter reads. The signers urge the administration to invest in both housing vouchers and improvements in existing public housing, as well as the construction of more affordable units.

As for investments in public transit, at least one Catholic theologian says the church offers limited guidance on the subject but believes Catholic social teaching about the common good provides some support.

“There is nothing that arrives at the level of an encyclical,” Ramón Luzárraga, a theology professor at Benedictine University, told America. “But if you deduce Catholic understandings of the common good, it stands to reason that a strong infrastructure is important for the common good because infrastructure is part of the temporalities which enable us to do our work.”

He said that from a purely utilitarian point of view, investing in infrastructure makes economic sense. But from a Catholic perspective, he said, expanding access to reliable public transit means improving the quality of life.

“It’s the human exchanges that make life worth living, and transit makes those possible,” he said.

[Read this next: Nursing homes were broken long before Covid-19 ]