Who will Joe Biden send to Rome? 8 top contenders for U.S. ambassador to the Vatican 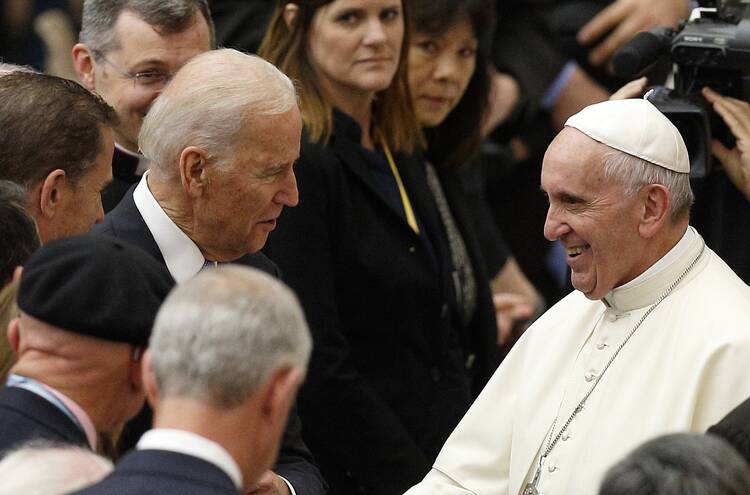 As Joseph R. Biden Jr., the second Catholic president in U.S. history, continues to fill out his administration, a number of important executive and ambassadorial nominees will go before the Senate. One position of particular interest for American Catholics is the U.S. ambassadorship to the Holy See.

Since 1984, the United States and the Holy See have maintained formal diplomatic relations, building on a fraught history of relations going back to the Washington administration. Mr. Biden, who keeps a photo of himself and Pope Francis on a table behind his desk in the Oval Office, is likely to consider several factors in his decision, including what priorities Mr. Biden would seek to emphasize with the Holy See, the expertise and familiarity with the church of the candidates and what message Mr. Biden wants to send to U.S. Catholics.

[Explainer: The (complicated) history of U.S. ambassadors to the Vatican]

If precedent is any indicator, whoever Mr. Biden names as the 12th U.S. ambassador to the Holy See is likely to be a practicing Catholic who has either been directly employed by the church or volunteered with its organizations. Additionally, the ambassador is likely to be an open supporter of the president.

So, who is it going to be? A quick survey of the U.S. Catholic scene brings a number of potential frontrunners to mind.

1. Elizabeth Frawley Bagley is an American attorney who has held diplomatic positions in the Clinton and Obama administrations. A graduate of Regis College and Georgetown University School of Law, Ms. Bagley served as the U.S. ambassador to Portugal (1994-97), as Special Representative for Global Partnerships (2009-10) and as Special Advisor for Secretary’s Initiatives (2014-17).

If precedent is any indicator, whoever Biden names is likely to be a practicing Catholic who has either worked or volunteered with the Catholic Church — and who is an open supporter of the president.

Ms. Bagley, a prominent supporter of the Democratic Party, serves on the board of directors of the International Centre for Missing & Exploited Children, the American Ireland Fund, the National Democratic Institute for International Affairs and the National Park Foundation. Ms. Bagley served on the Catholics for Biden outreach initiative during the 2020 campaign.

2. Felice Gorordo is chief executive officer of eMerge Americas. A native of Miami, Mr. Gorordo is a graduate of Belen Jesuit Preparatory School and Georgetown University. During the George W. Bush administration, Mr. Gorordo served as an aide to U.S. Secretary of Commerce Carlos Gutierrez and later as special assistant to the director of the U.S. Citizenship & Immigration Services, Col. Emilio T. Gonzalez.

Mr. Gorordo has also served in the U.S. State Department and was appointed a White House Fellow by President Obama. Mr. Gorordo has also been heavily involved in U.S.-Cuba relations, accompanying Secretary of State John Kerry to the reopening of the U.S. embassy in Havana, as well as joining Pope Francis on his apostolic visitation to Cuba in 2015. Mr. Gorordo also served on then-Vice President Biden’s National Cancer Moonshot Initiative and was a member of Catholics for Biden.

3. Alexia Kelley is the president and C.E.O. of Fadica (Foundations and Donors Interested in Catholic Activities). A graduate of Haverford College and Harvard Divinity School, Ms. Kelley served for 10 years at the U.S. Conference of Catholic Bishops’ Catholic Campaign for Human Development. She also served as the deputy director of the White House Office of Faith-Based and Neighborhood Partnerships during the Obama administration. She worked previously for Environmental Resources Trust, a nonprofit that focused on market-based solutions to renewable energy promotion and climate change mitigation.

[Related: Can Joe Biden work with the bishops? The White House director for faith partnerships thinks so.]

4. Dan Lipinski served as U.S. Representative for Illinois’ Third Congressional District from 2005 to 2021. Mr. Lipinski was considered one of the most socially conservative Democrats while in Congress and was a vocal opponent of abortion and embryonic stem cell research. He holds a doctorate from Duke University in political science and has previously taught at the University of Notre Dame and the University of Tennessee. A devout Catholic, Mr. Lipinski represented a district that was considered a home for “Reagan Democrats.”

5. Martin O’Malley served as the 61st governor of Maryland and the 47th mayor of Baltimore. Mr. O’Malley attended Gonzaga College High School, the Catholic University of America and the University of Maryland School of Law. Mr. O’Malley, a former presidential candidate, also served as chairman of the Democratic Governors Association. Now in private practice, Mr. O’Malley has served as the inaugural Jerome Lyle Rappaport Visiting Professor at Boston College’s School of Law and was a supporter of Catholics for Biden.

6. Kerry Robinson is the global ambassador for the Leadership Roundtable, which promotes best practices for the church and its institutions in the areas of management, finances, communications and human resources. (Editor’s note: Ms. Robinson has written for America.) A graduate of Georgetown University and Yale Divinity School, Ms. Robinson has served as the director of development for Saint Thomas More Catholic Chapel & Center at Yale University and is the founding executive director of the Leadership Roundtable. Ms. Robinson is a trustee of the Raskob Foundation for Catholic Activities and a member of Fadica. Ms. Robinson is a noted author in the areas of church management, the empowerment of female voices within the Catholic Church and philanthropy.

Can Joe Biden work with the bishops? The White House director for faith partnerships thinks so.
Nicholas D. Sawicki

7. Stephen Schneck is the executive director of the Franciscan Action Network. Mr. Schneck holds degrees from Rockhurst University and the University of Notre Dame. Previously an associate professor and director of the Institute for Policy Research and Catholic Studies at Catholic University, Mr. Schneck currently serves on the board of directors for Sojourners, the Catholic Mobilizing Network and the Catholic Climate Covenant. In addition to his academic work and activism, Mr. Schneck served as national co-chair of Catholics for Obama in 2012 and was appointed by President Obama to the Advisory Council on Faith-Based and Neighborhood Partnerships in 2015. Mr. Schneck supported President Biden as co-chair of Catholics for Biden.

8. Carolyn Woo served as president and C.E.O. of Catholic Relief Services from 2012 to 2016. Born and raised in Hong Kong, Ms. Woo immigrated to the United States in 1972 to attend Purdue University, where she received her B.A, M.S. and Ph.D. Ms. Woo served as Associate Executive Vice President for Academic Affairs at Purdue University and then became Dean of the Mendoza School of Business at the University of Notre Dame from 1997 to 2011.

[Watch: Carolyn Woo on what Joe Biden has to offer Catholic voters]

Ms. Woo helped launch the Principles for Responsible Management Education for the United Nations Global Compact and has served on the board of Aileron Foundation; Catholic University of America; Archdiocese of Baltimore Independent Child Abuse Review Board; Migration & Refugee Services, U.S. Conference of Catholic Bishops; and the U.S.C.C.B. International Policy Committee. Ms. Woo also served as a member of Catholics for Biden.

Have thoughts on who should be the next ambassador to the Holy See? Tell us in the comments section below.