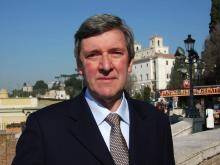 As Pope Francis’ visit to Cuba drew to a close, I asked Emeritus Bishop Luis del Castillo, a close observer of Cuban society and the church-state relationship there, for his analysis.

“The core of Pope Francis’ message to the Cuban people was reconciliation, pardon and building together the future of the country,” he told me. “Francis is looking to Cuba’s tomorrow” and believes “the result of that pardoning and reconciliation would be the ability to work together in spite of differences.”

He believes Francis’ message is “pardon and reconciliation as a basis and resource for peace” and “a challenge to both young people and the Catholic laity to engage actively in the construction of a new Cuban society.” It is also a reminder to the Cuban church that “we serve people, not ideas” and that Catholics should “be careful not be trapped in conventillos” (small cells).

During my stay I gained the impression that Cuba’s church leaders are afraid the process of change will go too fast. They are concerned that once the U.S. embargo is lifted, major changes will follow rapidly in the economic, political and social fields and will push many of the island’s 11 million inhabitants to the margins, as happened in Eastern Europe after the collapse of Communism.

When I asked Bishop Luis if there is a real danger that the poorer people will suffer enormously once the embargo is removed, he replied: “It’s very difficult to imagine a worse situation. And obviously we don’t want an abrupt change that would produce a different type of gold rush: from Communism to consumerism overnight.”

In this context, he recalled that President Raúl Castro, in a speech in 2013, “challenged all citizens, but in particular religious organizations, to work on recovering the best ethical values in order to save whatever political, economic or social changes could be introduced. He mentioned specifically the changes in the economy that started with the Sixth Congress of the Cuban Communist Party in 2010 and insisted that “no matter what changes we introduce in our economic system, if we don’t change the corruption that pervades Cuban society, our efforts are useless.”

Bishop Luis is convinced that Cuba’s church “needs to help in this preliminary process of recovering solid moral values to avoid harmful impact on the poorest that could result from the restoration of diplomatic relations and the embargo’s elimination.”

He said Francis “was very clear in focusing our attention on caring for the more fragile members of society and insisting that we cannot forget people, starting with the weakest, los mas pequeños. If not, there could be some type of future heartless gold rush.”

Bishop Luis hopes two things can happen in the church here over the next three years.

First, “I’d hope that the Catholic Church is more confident in being an iglesia en salida—a church that goes out to strengthen what is already a special feature of the church here, which is casas de misión—the work of the church in small suburban and rural communities. This could be developed with greater confidence.”

Pope Francis, he said, “is challenging the lay people in the church to engage in building Cuban society, and he’s encouraging young people to do this together, daring to dream of a new country and overcoming the differences of any type: religious, political, social or racial.”

When I recalled that this was his inspiring message to thousands of young people at Havana’s Centro Felix Varela, Bishop Luis remarked: “Working together is the only way ahead. As Kipling said, ‘Dream but do not make dreams your master and thoughts your aim!’ So dream for a better Cuba and work for it together, starting from what we have in common, our common ground.”