Interview: Joe Biden says ‘America is back.’ What does that mean for U.S.-Vatican relations? 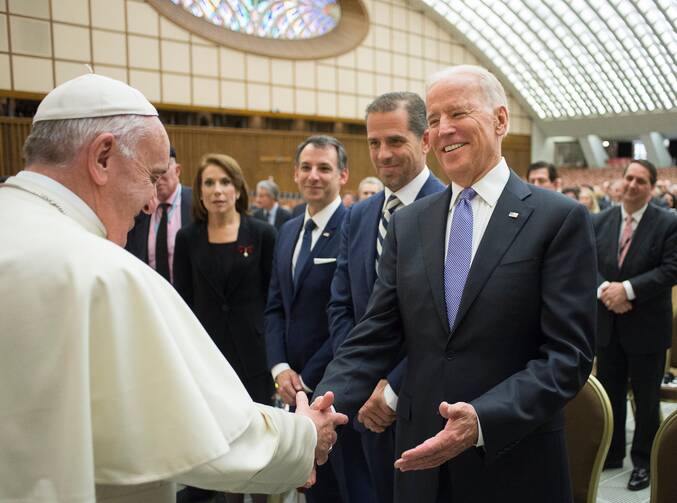 This is the third installment of a three-part series of interviews with Archbishop Paul R. Gallagher, the Vatican’s Secretary for Relations with States. You can read Part 1 here and Part 2 here.

Archbishop Paul R. Gallagher is not unfamiliar with the new president of the United States. The archbishop and Joseph R. Biden Jr. spoke for an hour when the then-vice president visited the Vatican on Nov. 28, 2015. According to a White House communiqué at the time, the two discussed efforts to conclude an ambitious agreement on climate change in Paris later that year, the fight against ISIS, the migration crisis in Europe and other global issues.

Many of these global challenges remain, and in an interview with America on March 11, Archbishop Gallagher discussed what the Holy See hopes for from the new Biden administration at the national and international levels.

“Engagement is one of the things we want,” he said. He recalled that President Biden “has already announced that America is coming back, and so we expect the strengthening of the multilateral institutions,” including the United Nations, the World Health Organization and UNESCO, which the United States “tended to turn its back on in the last four to five years.”

The archbishop was also confident that the United States, with John Kerry spearheading the effort as the special presidential envoy for climate, can become a leader in the fight against climate change and “make bold, even audacious commitments” at the United Nations Climate Change Conference, known as COP26, in Glasgow this November.

The archbishop was confident that the United States, with John Kerry spearheading the effort as the special presidential envoy for climate, can become a leader in the fight against climate change.

On the domestic front, the Holy See “wishes the United States to move forward on the pandemic,” he said. “America cannot be strong internationally unless it is strong domestically, and obviously the pandemic will be a determining issue there.”

“America has a role nearly everywhere in the world,” Archbishop Gallagher said, “and we are in a moment of time in which there are innumerable conflicts and problems around the world.”

Those problems include the existential threat of nuclear weapons. Archbishop Gallagher said he hoped the United States would work with Russia “on renegotiating the sort of nuclear architecture to make the world safer, that it would move forward on arms reduction, disarmament and non-proliferation.”

“America has a role nearly everywhere in the world,” Archbishop Gallagher said, “and we are in a moment of time in which there are innumerable conflicts and problems around the world.”

He said the Holy See also hopes to see an improvement in relations between the United States and Europe, calling it “a very important relationship.” He said the same about the United States’ role in Latin America and Africa. Though he did not say so explicitly, the Vatican clearly sees a strong U.S.-European alliance as an essential balance to a rising China.

Under the Trump administration, Secretary of State Mike Pompeo urged the Holy See to side with the United States against China and was critical of the Vatican’s agreement with Beijing. I asked the archbishop what he hoped for in regard to U.S.-China relations.

“We do hope that America will improve its relations with China because that obviously has an enormous impact on the world’s economy and security, particularly in Far East Asia,” he said. Furthermore, he said, “although we understand the concerns of the United States and others about China, we certainly believe more attention has to be given to China, trying to understand its ambitions and policies.”

“I think it’s really a question of moving forward in dialogue between these two great powers now and in the immediate future,” he concluded.

Under President Donald J. Trump, the United States withdrew from the treaty with Iran on nuclear power (The “Joint Comprehensive Plan of Action”), and Archbishop Gallagher hopes the Biden administration will find a way to re-engage on this issue, too.

“We do hope that America will improve its relations with China because that obviously has an enormous impact on the world’s economy and security.”

“I’m given to understand that both Iran and the United States are willing to negotiate around that treaty,” he said. “I can understand the Americans’ desire for improvement in the treaty. Everyone recognizes that it was not perfect, and we do encourage the Iranians to move forward in that sense as well. We believe that [the treaty] was a very positive step, and we regret anybody stepping back from that.”

“I think that the American withdrawal and the repercussions of that in Iran have only contributed to a more tense situation and greater insecurity in the region,” Archbishop Gallagher said, “and these are two dangerous things. I think also that moving forward at this time to review the agreement and to recommit to the agreement would be of great benefit to the Iranian people, who are obviously suffering very much under the sanctions imposed on them by the international community and by the United States, in particular.”

“It’s a possibility,” he stated, “but any proposal that’s on the table for too long goes a bit stale, and certainly there are a lot of young people both in Israel and in Palestine who appear to have lost faith in the two-state solution. And it’s not helped by certain policies.”

We believe the two-state solution is not dead, and there are some people who still put their weight behind that solution. Maybe it will end up being a two-state solution with nuances. I don’t know, but it still remains our position, and we are encouraging others to support it. But in the end, what really counts is what is in the best interests of both communities, and that needs to be constantly evaluated. In the end, it will be their decision. That’s why we encourage very strongly direct negotiations between Israel and Palestine.

“We wait to see what the active engagement of the new American administration will be with the Holy Land,” the archbishop said. “They’ve already said they’re not going back on things that have been decided by President Trump.” What the Holy See will be looking for “is a balanced approach to the region,” which means that “when you deal with Israel then you have to take always into consideration the interests of the Palestinians.”

“If we see that, then we do well,” Archbishop Gallagher said. “It is all part of our hope of a re-engagement by the United States with all the actors in the region.”

In 2020, four Arab countries—the United Arab Emirates, Bahrain, Sudan and Morocco—normalized relations with Israel. The archbishop said these diplomatic breakthroughs present “opportunities for Israeli politics to take into consideration more actively the interests of the Arab world. We also hope that these agreements will not make Palestine more isolated from the international community and the regional community, in particular.”

Pope Francis’ trip to Iraq was a historic breakthrough. But will it lead to greater peace in the Middle East?
Gerard O’Connell

Pope Francis spoke out against oppression in Myanmar. Why is he silent on China and Hong Kong?
Gerard O’Connell

I noted that in recent decades we have seen governments working to create coalitions for war, as was the case in Iraq and Yemen, and asked if he thought that the pope is working to create a coalition for peace through his dialogue with other religions, starting with Islam.

Archbishop Gallagher agreed. He noted that in recent years “there has been a great deal of interest in religion and faith-based organizations” from the United Nations and individual governments. What the Holy See tries to communicate, he said, is that “ultimately religion should be directed by religious leaders, not by politicians.”

“In some ways, yes, the pope is trying to bring on board, to unite, religious leaders to make positive contributions because many people feel that religion is divisive, that religion is more part of the problem than of the solution to conflicts in some parts of the world,” the archbishop said. “And I think the Holy Father is saying we must, in a spirit of humility, try to work together to make positive contributions, to make prophetic contributions to the conflicted parts of the world.”

He added, however, that “it’s not a very strategic plan. I think he’s launching something, entrusting it ultimately to the Almighty to see what comes of this and what good may come out of it. But it has, rather surprisingly, so far had an impact, and I am surprised and grateful that these initiatives which the pope has taken on are proving to be effective and bearing fruit.”