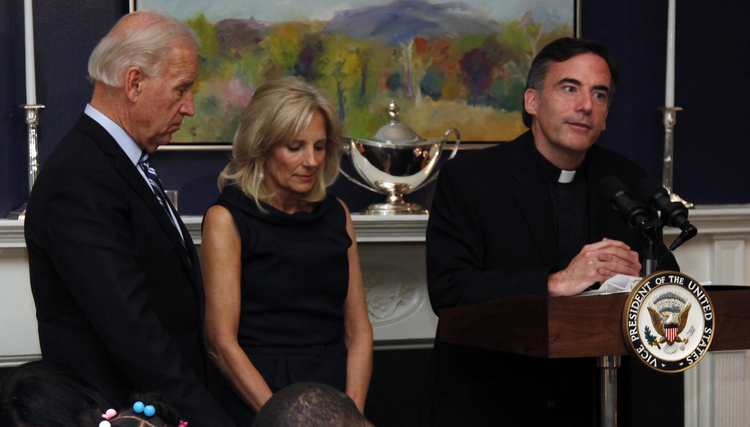 In this Nov. 22, 2010 file photo, Vice President Joe Biden, left, and his wife, Jill Biden, center, stand with heads bowed as the Rev. Kevin O'Brien says the blessing during a Thanksgiving meal for Wounded Warriors in Washington. (AP Photo/Carolyn Kaster)

SANTA CLARA, Calif. (AP) — The Jesuit priest who presided over an inaugural Mass for President Joe Biden is under investigation for unspecified allegations and is on leave from his position as president of Santa Clara University in Northern California, according to a statement from the college's board of trustees.

Rev. Kevin O'Brien allegedly “exhibited behaviors in adult settings, consisting primarily of conversations, which may be inconsistent with established Jesuit protocols and boundaries,” according to the statement by John M. Sobrato, the board chairman.

O'Brien gave the service at Cathedral of St. Matthew the Apostle, one of the most prominent Catholic churches in Washington, in January for Biden, who is the nation's second Catholic president, as well as Vice President Kamala Harris, their families and elected officials before the inauguration ceremony at the U.S. Capitol.

While Father O'Brien is on leave, he will be cooperating with the independent investigation.

The priest has known Biden's family for about 15 years, according to the university. O’Brien was then serving at Georgetown University, another Jesuit college. O'Brien has been president of Santa Clara University since July 2019.

Sobrato's statement, posted Monday to the university's website, did not specify the allegations against O'Brien but said the trustees “support those who came forward to share their accounts.”

Sobrato said that while O'Brien is on leave, the priest will be cooperating with the independent investigation, with conclusions to be shared with the Santa Clara University Board of Trustees. O'Brien didn’t immediately respond to a request for comment.

“Jesuits are held to a professional code of conduct, and the Province investigates allegations that may violate or compromise established boundaries,” Primrose told the newspaper.

Primrose did not immediately respond to The Associated Press' request for comment Thursday night.

O’Brien joined the Society of Jesus in 1996, according to the university, and was ordained to the priesthood in 2006.

Located in Silicon Valley, the Jesuit institution has an annual undergraduate enrollment of roughly 5,500 students. Ranked as one of the top 25 schools for undergraduate teaching nationwide, the private university has a billion-dollar endowment and counts California Govs. Gavin Newsom and Jerry Brown among its alumni.

Correction: An earlier version of this article stated incorrectly that Santa Clara University has a million-dollar endowment.

Associated Press - AP
Provide feedback on this article
Join the conversation: Login or create an account
Before you can comment, you need to update your profile to include your first and last name, as required in our comments policy. Then reload this page and you'll be set up for commenting. Update your profile