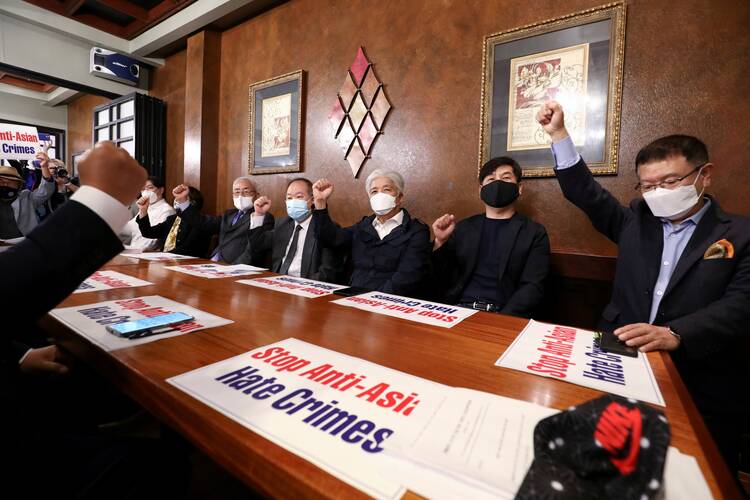 Members of the Atlanta Korean American Committee against Asian Hate Crime raise their fists as they meet at a Korean restaurant in Duluth, Ga., on March 18, 2021, after the fatal shootings at at three Atlanta-area spas. (USA/Dustin Chambers, Reuters)

Koreans and Korean Americans have been migrating to the Atlanta area for decades, drawn to Georgia by the same factors that attract other U.S. citizens and residents: the warm climate, the region’s expanding job opportunities and its affordable lifestyle.

More than 51,000 Koreans live in the Atlanta area. The Korean Martyrs Catholic Church, one of the primary parishes for Korean Catholics in the Atlanta metro area, has grown with that community. Jeong Seong, who leads the church’s parish council, describes it as a community in a state of shock today following the mass shooting on March 16 that took the lives of eight people.

Six of the victims were Asian women and four have been described by police as Korean, but Mr. Seong does not know if the victims were South Korean nationals or Korean Americans. He does not believe any of the victims belonged to Korean Martyrs Catholic Church, but, like everyone else, he is waiting for more information about them.

His parish gathered Thursday to offer prayers for the victims and prayers for peace. In the immediate aftermath of the violence, he believes that the Atlanta metro area is coming together well, and he expects that his parish will be stepping up to join other civic and religious bodies as a community response is mapped out.

The Korean Martyrs Catholic Church gathered to offer prayers for the victims and prayers for peace. The parish will be stepping up to join other civic and religious bodies as a community response is mapped out.

The shootings in and around three metro area massage parlors were the kind of random violence that is difficult to prepare for, he said, but he expects that his church will reappraise its own security protocols, pointing out that church shootings appear to be a problem in his adopted homeland. “We need to look at the security of our church more seriously.”

Though he believes the shooter was probably not explicitly targeting Koreans, he is worried these days that such mortal animus may be focused on any person perceived to be Asian. “It is really concerning to see such an incident,” he said. “It makes me feel targeted too.”

Most of the area’s Korean residents came to Georgia, according to Mr. Seong, following investments in manufacturing sites by Korean car and auto-battery makers, related parts manufacturers, and service businesses that opened to cater to the growing Korean presence. That industrial footprint attracts some Koreans who plan to stay only as long as the work holds out, he said, but others are eager to settle down in the area. And like parents everywhere, many find themselves bound to stay by their American children.

His parish has roots in home meetings organized by a handful of Korean Catholic families in the mid-1970s. Korean Martyrs Catholic Church opened in 1992, joining other area parishes and mission sites that serve Atlanta-area Korean Catholics. On a decent Sunday, he said, the church will draw as many as 700 Korean and Korean American families together to celebrate Mass.

Life in America has, of course, demanded some adjustments for this rising immigrant community. Mr. Seong, happy to escape the high cost of living and cold temperatures of the North, seems confounded by Georgia’s gun culture. His 2021 did not begin auspiciously. He explained that at midnight on New Year’s Day a window of his home was shattered by a stray bullet—he does not believe his family was deliberately targeted—as neighbors threw fireworks and gunfire into the air. “Maybe we should try to raise awareness about how dangerous that is,” he suggested, explaining that such gunfire “accidents” do not happen in South Korea.

Most Koreans came to America with great expectations and enthusiasm, perceiving it as a land of justice and peace and good community relationships. Now many have begun to question that perception.

But, he said, it was only recently that he has begun to feel any real anxiety going about his business in Atlanta.

He had considered street-level encounters in multiethnic and dense neighborhoods that ended in harassment or assault of people because they appear Asian a big-city problem, not anything to worry about in the comparable sprawl of the Atlanta metro area. “The urban landscape is not so pronounced [here]…. People enjoy their own [property] and are not bothered by each other,” he said. “That’s kind of been the culture down here, but it looks like it is getting more and more the urban kind of conflict is coming in.”

Now he finds himself surveying other drivers and passersby for signs of hostility.

“Before when I drove on a highway, I never cared about who was driving next to me,” he said. “But nowadays I just take a look at fellow drivers, [wondering] if they are keeping guns or doing something suspicious.

“It is really quite distracting,” he added with a laugh. “I never worried about such things before.”

A professor of geography at the University of West Georgia, he has been a resident of the United States since 1995 and became a citizen in 2016. His U.S.-born children are finishing college and planning their future here.

The last four years under President Trump, he said, raised anxieties within his community and among other Asian groups. Most Koreans he knows came to America with great expectations and enthusiasm, perceiving it as a land of justice and peace and good community relationships. Now many have begun to question that perception. “Many started to rethink living in America,” he said.

During the last election, many Koreans became more attentive to the political process. Mr. Seong expects that after the shootings, the Korean community will become more forthright in promoting better community relationships and asking that hate crimes be more seriously treated. He remains deeply concerned by the susceptibility of young Americans to extremist messages gleaned from internet sites or social media.

He hopes that under President Joe Biden, the United States can restore the reputation it previously had among Koreans. He was gratified to hear of the president’s and vice president’s visit to Atlanta today to meet with Asian American leaders.

“That’s really helpful,” he said, “leadership showing some sort of condolence and also sympathy to the families of the victims. I think that’s the starting point of healing this kind of hatred.”

Correction: In an earlier version of this report, the Korean Martyrs Catholic Church was misidentified as the Korean Catholic Martyrs Church.